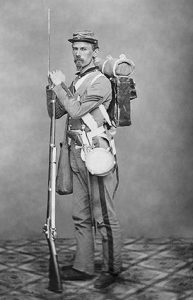 An unknown Union Soldier poses for a photo with a full load. Note the musket, bayonet, and knapsack. Library of Congress.

Goal:
Through an examination of Soldiers’ Load objects, visitors will learn about the Army’s Civil War military mission and strategy, and Soldiers’ roles in carrying them out. The audience will recognize the load items carried by Civil War Soldiers to illustrate technological change that occurred in the Army during the Civil War.

Program Description:
The Civil War consumed the United States from 1861 to 1865. Tens of thousands of Soldiers endured hardships and challenges to carry out the Army’s military mission to preserve the Union. The items Soldiers carried into the field were invaluable to performing their duty and executing the Army’s mission.

Join a Museum educator to explore the gear, weapons, and personal items that made up a Civil War Soldier’s Load.

Objectives:
At the end of the lesson, participants will be better able to:

Guiding Questions:
How did the items that Soldiers carried during the Civil War help carry out the Army’s military mission to preserve the Union?

What technological innovations influenced how Soldiers fought and served?

USIL.9 The student will apply social science skills to understand the causes, major events, and effects of the Civil War by:

VS.7 the student will demonstrate an understanding of the issues that divided our nation and led to the Civl war by: