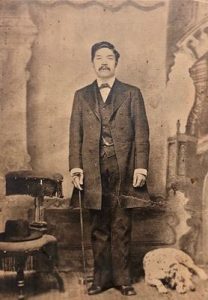 Soldier, immigrant, and restaurateur Edward Day Cohota dedicated 30 years of his life to the U.S. Army despite the U.S. government denying him citizenship. Born in China, Cohota was adopted by an American sea captain and enlisted in the Union Army during the Civil War. He fought for recognition as an American citizen, and though he never received it, his legacy of patriotism lives on.

Edward Day Cohota was born in a village near Shanghai, China, in the 1840s. Little is known about his childhood until 1845 when he made his way to the port of Shanghai, underfed and sickly, with his older brother. There, Capt. Sargent S. Day of the ship Cohota found the boys. Day took them in, but the elder brother soon died. The surviving brother took his English middle name from Capt. Day and last name from the ship, Cohota. When Day sold the ship in 1857, Cohota moved with Day and his wife to their home in Gloucester, Massachusetts. He spent the rest of his youth living there as a member of the Day family.

In the midst of the Civil War, Cohota decided to enlist in the Union Army. Day signed the Consent in Case of Minor form required for underage volunteers, allowing Cohota to enlist as a private in the 23d Massachusetts Infantry in February 1864. Enlistment records show his age as 18 years old. The intrepid young Soldier fought in many of the bloody battles at the close of the Civil War, including Cold Harbor, Petersburg, and Appomattox Court House. During his 16 month enlistment, Cohota narrowly escaped death on multiple occasions. During the Battle of Drewry’s Bluff in May 1864, Cohota emerged from the fighting with seven bullet holes through his clothing but no wounds. He had a similarly close call during the June Battle of Cold Harbor, when a minié ball grazed his head. At Cold Harbor, Cohota put himself in harm’s way to save the life of fellow Soldier, William Low, who had been shot in the jaw and lay in the middle of the field. Seeing his dire situation, Cohota dragged Low behind a boulder before rejoining the fight. After the battle ended, he carried Low to medical help, saving his life.

Cohota remained in the Army until the end of the Civil War. He returned to Gloucester for a short time but was unable to find stable work, prompting him to reenlist; he was assigned to the 15th Infantry Regiment. He served with Company C for the next 20 years, stationed primarily at Fort Randall, Dakota Territory. Cohota performed many duties at Fort Randall, including serving meals and guard duty. Purportedly, he guarded Chief Sitting Bull when he was a prisoner of war at the fort in 1882. It was at Fort Randall that he also met and married his wife, Anna Halstenen, a Norwegian immigrant. He also helped build a telegraph line across northeastern New Mexico and trekked across vast portions of the American West. After his transfer to Company H, Cohota served the next 10 years at Fort Niobrara, Nebraska, as a cook and baker. The growing Cohota family moved to posts around the West until his retirement from the Army in 1885. They then settled in Valentine, Nebraska, and grew to be a family of eight, though their youngest son died in infancy.

Despite a career of service, Cohota faced a number of challenges in his retirement. Anna’s death in 1899 was a tragic loss for the family. Cohota became ill himself and was unable to care for their six children on his own. They were all rehomed, and several did not see their father again for many decades. Once recovered, Cohota opened a restaurant in Valentine with some success, but was forced to rebuild when a fire destroyed the business in 1910. One of his greatest sources of pride was his ability to vote. He voted in every election he could, believing himself to be an American citizen. It wasn’t until 1912, after his application for Nebraska homestead land was rejected, that Cohota discovered he was not a legal American citizen. Further, the passage of the Chinese Exclusion Act of 1882, which prohibited the immigration of Chinese people to the United States, made it impossible for Cohota to gain citizenship, though he tried through appeals. Denied his appeal, Cohota never received American citizenship, though he did receive a military pension.

Cohota returned to Massachusetts a final time in 1928. During his visit, he reunited with his children, the Day family, and even with William Low, the Soldier he saved at Cold Harbor. Cohota returned West after the trip and resided at the Battle Mountain Sanitarium for Veterans in Hot Springs, South Dakota, until his death in 1935. The Chinese Exclusion Act was not repealed until 1942. Much later, the U.S. House of Representatives recognized the service of Cohota and other Asian American Soldiers in a joint resolution, stating, “[the House] expresses its appreciation for the courageous and loyal contributions made by soldiers of Asian and Pacific Islander descent during the United States Civil War.” While not a citizen on paper, Cohota’s selfless service to the Army and the United States is demonstration of his loyalty to his country.

Fuchs, Chris. “Since the Civil War, Asian Americans have served in the military with distinction.” NBC News, May 24, 2019. https://www.nbcnews.com/news/asian-america/civil-war-asian-americans-soldiers-have-served-distinction-n1008476.