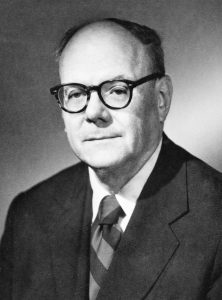 Army historian Forrest C. Pogue pioneered oral history as common academic practice in the U.S. military. Oral history is the telling and collecting of verbal stories. While oral histories have been used for millennia in many cultures, they were not considered an academic practice until the mid-twentieth century. Pogue documented World War II as a combat historian, using oral histories as a key component of his work. His most famous works include a history of Gen. Dwight D. Eisenhower’s leadership and a biography of Gen. George C. Marshall.

Born in Eddysville, Kentucky, in 1912, Forrest Carlisle Pogue’s interest in education began at a young age. He spent much of his childhood with his grandfather, a farmer and teacher, whom he credited with inspiring his deep love of learning. Pogue excelled in school, graduating from high school at the age of 14. He was fluent in French and spent a year studying at the University of Paris. At 19, he graduated with a B.A. from Murray State Teachers College (now Murray State University) where he met his future wife, Christine Brown. Pogue went on to earn a Doctor of Philosophy in History at Clark University in 1936. He returned to Kentucky to teach history until he was drafted into the Army in 1942.

Master Sgt. Pogue was able to utilize his academic skills on the frontlines. As one of the most highly educated active-duty Soldiers, Pogue was assigned to the Historical Division of the War Department. He was tasked with documenting the history of the Army, starting on the European frontlines. He spent 11 months on the European front, arriving in Normandy on D-Day, June 6, 1944. He began by interviewing wounded Soldiers on a hospital ship, and found it easier to tape record their conversations than to take notes. He continued this work onshore at Omaha Beach, where recordings were more practical than pen and paper. His interviews offered an intimate look at combat warfare. Pogue earned a Bronze Star Medal and a Croix de Guerre, a French medal awarded to foreign military leaders, for his work.

Pogue’s success in collecting data on the frontlines inspired work for the rest of his career. At the end of World War II, Pogue served as a civilian historian for the Department of the Army. In 1952, he returned to Kentucky to teach at Murray State College. There, he reunited with Christine Brown, and they married in 1954. After Pogue’s success documenting World War II, General Dwight D. Eisenhower personally requested the historian to write an official history of his leadership in Europe. Pogue’s research on Eisenhower culminated in his first published book, “The Supreme Command.” He later wrote a biography of General George C. Marshall, which is still considered the definitive study of Marshall’s life. While gathering research for the biography, Pogue recorded 40 hours of interviews with Marshall and interviewed at least 300 additional people. Pogue later credited the success of the biography on his use of oral histories, stating: “I believe these interviews permitted me to write with a certainty that I could not have achieved from a study of documents alone.”

Pogue continued to promote the use of oral histories for the rest of his career. He served as the director of the Marshall Foundation through the 1960s and early 1970s. In 1974, he moved to the Eisenhower Institute for Historical Research. He continued to work, write, and guest lecture around the country until retiring in 1984. In 1996, Pogue died in his home state of Kentucky. He not only fostered the use of oral histories in the United States Army, but also helped to create an oral history program at Murray State University, cultivating future generations of oral historians. Today, the “Pogue Collection” at Murray State contains much of his writings. The diaries of his time in the military were compiled into the book, “Pogue’s War: Diaries of a WWII Combat Historian.” A gifted historian and writer, Pogue left the world a more informed and empathetic place. In the words of historian Stephen Ambrose, “For all those who followed in studying and writing about the war in Europe, Pogue… [is] an inspiration.”