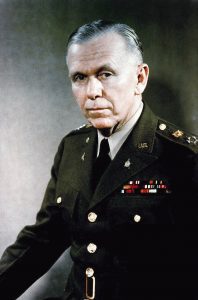 It has been said that courage can be contagious. Those who served under General George C. Marshall would add that his additional characteristics—that of quiet dignity, effective communication, and the belief in the good of one’s country—were just as effective. Altogether, they were the reason Marshall was the first man promoted to five-star General of the Army during World War II. His legacy, both on and off the battlefield, left a lasting impression on the U.S. Army and the world.

George Catlett Marshall is often described as a “genius of logistics.” A 1901 graduate of the Virginia Military Institute, he studied modern warfare at Fort Leavenworth, Kansas. There he graduated first in his class at the Army Staff College. Taking what he had learned at Fort Leavenworth, Marshall assisted with the 1st Division’s mobilization and training, both in the United States and in France, during World War I.

Marshall served as one of the chief planners of the Meuse-Argonne Offensive. He successfully transferred almost 600,000 men to the front without provoking the German army into deploying additional troops. As part of the Allies’ final offensive strategy, the Meuse-Argonne Offensive stretched across the entire Western Front from late September, 1918, through the final day of the war on November 11, 1918. His logistical skills impressed his superiors so much that they noted “he should be made a brigadier general … and every day this is postponed is a loss to the Army and the nation. He is a military genius.”

Following World War I, Marshall became aide-de-camp to Army Chief of Staff General John J. Pershing from 1919 to 1924. The two men had had run-ins throughout the war, and Marshall had made an impression when he vigorously defended his divisional commander against what he considered to be unjust criticisms from Pershing. What might have led to a court-martial instead ended with Pershing admiring the younger man’s honesty, loyalty, and candor. Pershing soon had Marshall transferred to his staff.

Of all the lessons Marshall learned while working under Pershing, the necessity of a trained, mobilized Army was the most important. Both men had been horrified by the lack of training soldiers received during the Great War. They believed it resulted in unnecessarily high casualties in the 19 months the country had been at war. Consequently, throughout the rest of his 45 year Army career, Marshall fiercely advocated for combat readiness, so much so that he made it the focal point of his time as an instructor at the Army’s Infantry School at Fort Benning, Georgia, from 1927 to 1932.

Marshall’s curriculum emphasized the importance of tactical innovativeness, creativity, and operational flexibility. He and his instructors wanted their officer-students to be able to think through and solve problems on the battlefield quickly, without being tied down with old-fashioned techniques and what was known as “the school solutions.” By the end of his five years at Fort Benning, Marshall and his staff had transformed the Infantry School into an institution that “developed flexible, effective leaders for the modern battlefield.” By doing so, he trained 150 future World War II generals.

Marshall has long been compared to another famous American George—George Washington. They were both Soldiers of maturity and dignity whose military identity merged with America’s purpose. They were father figures; leaders not followers. Perhaps that is why, when Europe was on the precipice of war once again, President Franklin D. Roosevelt instinctively turned to Marshall for guidance.

Marshall was renowned for his frankness and did not hold back when Roosevelt asked for advice. In November 1938, he bluntly told Roosevelt that he did not agree with the president’s idea to build 10,000 warplanes as a way to help Europe while simultaneously deterring Hitler. His response shocked the president. His colleagues believed that he had ruined his career. Once again, however, Marshall’s candor won out and Roosevelt appointed him the Army’s chief-of-staff. He was sworn in on September 1, 1939, the same day Adolf Hitler invaded Poland.

As chief-of-staff, Marshall transformed the Army during World War II. Before the start of the war, America’s Army was composed of approximately 174,000 men and ranked 17th in the world in terms of strength. Marshall and Henry Morgenthau, the secretary of the treasury, approached Roosevelt with a $675 million budget (about $13 billion in 2021) that they argued would be enough to create an Army of 1.25 million men by 1941. This, they explained, would be the bare minimum needed for America to remain neutral, but also be prepared for war. After initially dismissing the plan, Roosevelt listened to Marshall’s explanation as to why it was necessary and how, by disregarding the plan, Roosevelt was putting the nation in grave danger. Two days later, Roosevelt sent Marshall’s budget and plan to Congress, where it was approved with a budget of $900 million (about $17 billion in 2021). Marshall’s plan was so effective that by the end of the war the United States Army was made up of 8.25 million Soldiers.

Both Congress and President Roosevelt came to rely heavily on Marshall throughout World War II. Sam Rayburn, the speaker of the house, stated that “of all the men who ever testified before any committee on which I served, there is no one of them who has the influence with a committee of the House that General Marshall has.” Congress and the president appreciated Marshall’s integrity, loyalty, and effectiveness. Their reliance on Marshall played a part in why he was not appointed commander of Operation Overlord, which was the code name given to the invasion of France in 1944. Roosevelt instead gave the command to General Dwight Eisenhower, explaining to Marshall that he “didn’t feel I could sleep at ease with you out of Washington.” Despite not receiving the coveted command of Operation Overlord, Marshall was instrumental in the planning of the invasion of Normandy. In order to be of equal rank to his European counterparts, Congress appointed Marshall a five-star general of the army on December 16, 1944. He was the first of five World War II Army generals to hold this rank.

Marshall retired as the Army’s chief-of-staff in November 1945. He had hoped to retire from public life altogether but, before he could, President Truman asked him to serve as secretary of state. Ever the loyal citizen, Marshall felt as though he could not refuse. He was sworn in on January 21, 1947. As secretary of state, Marshall achieved one of his greatest victories, the implementation of the Marshall Plan. This plan, officially known as the European Recovery Program, aimed to help allied European countries rebuild after World War II and stop the spread of communism from the Soviet Union. After Marshall successfully appealed to Congress, the United States sent $13 billion in economic aid (about $134 billion in 2021). By the time the plan ended in June 1952, every allied state’s economy had grown past its pre-war levels. He was awarded the Nobel Peace Prize for the Marshall Plan in 1953.

Marshall finally retired from public service in 1951 after 49 years of service to his country, including a year as secretary of defense from 1950 to 1951. He enjoyed life as a private citizen but did agree to one notable public service appointment in 1953, when President Eisenhower asked him to head the American delegation at Queen Elizabeth II’s coronation. As he walked into Westminster Abbey to take his seat before the ceremony, the audience rose to their feet as a sign of respect to the man whom Winston Churchill hailed as the “true organizer of victory.”

General George C. Marshall died at Walter Reed Hospital on October 16, 1959, at the age of 78 after suffering a series of strokes. Since his death, he has been hailed as the “last great American.” A title worthy of a humble, determined, courageous man who guarded the ideals of democracy and transformed America’s Army into one of the strongest the world has ever known.