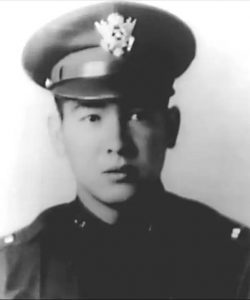 On October 20, 1944, General Douglas MacArthur waded onto the shores of Leyte in the Philippine Islands to deliver his famous radio address announcing his return to the island chain. Shortly before this announcement, on another beachhead, Capt. Francis Wai exhibited the finest ideals of military service as he took command of a leaderless company under heavy machine gun fire and led it to victory. Wai headed for the worst of the fighting to assist his fellow Soldiers, even though he could have stayed away from the carnage, and eventually gave his life to rescue them. In doing so, he earned the nation’s highest award for valor: the Medal of Honor.

Francis Brown Wai was born to a Chinese immigrant and a native Hawaiian in Honolulu, Hawaii, on April 14, 1917. Growing up he excelled in athletics and even paddled for the Hui Nalu Canoe Club. He attended Sacramento Junior College, where he played quarterback and became the state light heavyweight boxing champion. After two years, Wai transferred to the University of California at Los Angeles (UCLA) in 1937. At UCLA he lettered in football, starting two games at quarterback, as well as joining the rugby, basketball, and track teams. Wai’s athleticism and love for contact sports moved him toward the military. He joined the Hawaiian National Guard after earning his Bachelor’s Degree in Economics from UCLA in 1940. Wai’s superiors noted the young Soldier’s intelligence and leadership ability and sent him to Officer Candidate School at Fort Benning, Georgia. On September 27, 1941, Wai was commissioned into the Army as an infantry officer and returned to the Hawaiian National Guard. As the Hawaiian National Guard moved to active duty and became the 34th Infantry Regiment, Wai was promoted to captain and assigned to the regimental staff.

During the December 7, 1941, surprise attack on Pearl Harbor the 34th Infantry Regiment experienced its first combat of the war firing at Japanese bombers. After the Japanese air raid, Wai prepared with his unit to fight in the Pacific Theater. In 1943, Wai and his regiment deployed to Australia and began training in amphibious operations and jungle warfare to prepare for MacArthur’s “island hopping” campaign. After the 34th was certified for combat operations, the regiment participated in Operation RECKLESS, the seizure of Hollandia (now Jayapura) on the island of New Guinea. Shortly after landing, the 34th moved to Biak Island to reinforce the 41st Infantry Division, then returned to New Guinea to complete the campaign. The 34th eventually crossed New Guinea, capturing three Japanese airfields along the way. Throughout the operations, Wai distinguished himself as a cool-headed leader, beloved by both the officers and the Soldiers of the regiment. The reputation Wai built across months of combat in New Guinea cemented him as a leader who “men would go through a wall for,” in the words of Pvt. Hanford Rants.

Those qualities were on full display during the invasion of Leyte. Wai, alongside the 34th Infantry Regiment, had been assigned to assault Red Beach, the code-name for San Pedro Beach, alongside the 19th Infantry Regiment. The Japanese had established a sophisticated defense behind the beach, consisting of well-concealed machine gun positions, anti-tank obstacles, and tunnels integrated into the natural obstacles of rice paddies and dense jungle. The 34th Infantry’s first mission was to seize Hill 522, which offered dominant observation and fields of fire over the surrounding area: unless the 34th could capture the hill, other American forces would be under constant fire as they tried to move farther inland. The Japanese waited for the initial waves of American troops to land with only light resistance, but as other waves came ashore the defenders unleashed a barrage of machine gun fire and mortars into massed groups of Soldiers. Japanese artillery also drove away or sank the heavy landing ships carrying artillery and tanks. The first four waves of troops stalled on the beach, unable to move forward, and were being worn down by mortar fire.

Capt. Wai came ashore with the fifth wave to a scene of complete chaos. Machine gun fire from the Japanese bunkers had killed or wounded many officers and senior noncommissioned officers, leaving a mass of Soldiers trying to survive and advance. Capt. Paul Austin, the commander of Company F, believed that Wai was wounded within minutes of reaching the beach. Wai’s assignment as part of the regimental staff would normally have kept him a step behind the front lines, but he could see the need for leaders to get the stalled advance moving and inspire the Soldiers. Despite his wound, and seeing Company K in the worst of the fighting without their commander, Wai moved to their position, assessed the situation, and began issuing orders. After arming himself with a Browning Automatic Rifle, he exposed himself to machine gun fire from five bunkers to reveal their locations as he led Company K forward through the open beach and rice paddies. The Soldiers, having already built trust in him during the New Guinea campaign, followed his example.

Wai lead from the front, and was personally responsible for destroying three bunkers with hand grenades. Members of the 34th credit him with breaking the concentrated enemy fire long enough for the rest of the regiment to advance off of the beach. Moving ahead of the main formation, he used the athleticism he had built through years to evade machine gun fire to reach each fortification so he could eliminate Japanese defenders. He also drew the fire of a fourth bunker while another Soldier destroyed it. Eventually, though, Wai’s luck ran out: when he reached the fifth and final bunker, he was struck by a burst of machine gun fire and killed. The rest of the 34th knocked out the bunker and advanced to capture their objectives. Without Wai’s courage, leadership, and individual effort the 34th would likely have suffered more casualties and may not have been able to seize their objectives for the day. Had the 34th failed, the 19th Infantry Regiment would have similarly paid a higher price.

Col. Aubrey Newman, the 34th Infantry commander, recommended Wai for a Medal of Honor for his actions on Red Beach. When the paperwork reached the War Department (the predecessor of the Department of Defense), the medal was downgraded to a Distinguished Service Cross. In 1996, as part of a review of awards for valor in World War II, the Secretary of Defense concluded that Wai had not received sufficient consideration for the Medal of Honor. The Army reviewed his packet, and in 2000 upgraded his award to the Medal of Honor, which President Clinton presented to his brother on June 21, 2000. Francis Wai’s heroism at a critical moment forever cemented his legacy as a capable combat leader and selfless servant.