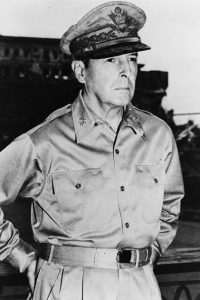 General of the Army Douglas MacArthur served as a career Army officer for the majority of his life. MacArthur, one of the few individuals to achieve a five-star rank, notably served in World War I, World War II, and the Korean War. A recipient of the Medal of Honor and 17 other medals, he distinguished himself as a talented, brave, and able military commander. Although a controversial figure, MacArthur’s decades of service stand as a testament to his dedication, passion, and ambition.

MacArthur’s involvement with the Army began as soon as he was born. The son of Lt. Gen. Arthur MacArthur Jr., a Civil War veteran and governor-general of the Philippines, MacArthur felt that it was his calling to honor his father’s legacy. His parents encouraged him to follow Arthur’s footsteps into the Army. After a childhood on the frontier and in Washington, D.C., MacArthur graduated first in his class from the U.S. Military Academy at West Point on June 11, 1903. MacArthur served as an engineering officer in the Philippines and aide-de-camp to his father, the commander of the Pacific Division.

After the death of his father on September 5, 1912 and his promotion to captain, MacArthur participated in the Veracruz Expedition. A fellow officer nominated him for the Medal of Honor for his actions in the expedition. After his promotion to major, MacArthur helped form a new division, the 42d “Rainbow” Division. With the entry of the United States into World War I, MacArthur deployed to France as the 42d’s chief of staff. During World War I, MacArthur attracted attention as a talented and courageous field commander. He led raids on German trenches and helped organize resistance to enemy assaults. He gained a reputation as a fearless leader and regularly exposed himself to danger. On June 29, 1918, the Army promoted MacArthur to brigadier general and he soon commanded the 84th Infantry Brigade. MacArthur successfully led the 84th during the Battle of Saint-Mihiel and the Meuse-Argonne offensive. Throughout World War I, MacArthur earned seven Silver Stars, two Croix de Guerres, two Distinguished Service Crosses, and the Army Distinguished Service Medal.

After the end of World War I, MacArthur returned to the United States and assumed the role of superintendent at West Point. He married Louise Cromwell Brooks in 1922 and transferred to the Philippines as commander of the Manila Military District. Throughout the 1920s, MacArthur served in a variety of roles, including as the president of the American Olympic Committee. After he and Louise divorced in 1929, MacArthur became chief of staff of the U.S. Army. During his tenure, MacArthur presided over severe budget cuts brought on by the Great Depression. In 1932, he received pointed criticism for his treatment of the “Bonus Marchers,” a group of impoverished World War I veterans who congregated in Washington to protest for veteran benefits.

MacArthur’s tour as chief of staff ended in October 1935 and he transferred to the Philippines. Filipino President Manuel Quezon appointed him field marshal to supervise the development of the Philippine army. In 1937, he retired from the Army but remained in the Philippines as a civilian appointment to the Philippine military. He married Jean Marie Faircloth in 1937 and the two welcomed a son, Arthur MacArthur IV, on February 21, 1938. As the storm clouds of war with Japan grew in 1941, President Franklin Roosevelt recalled MacArthur into service with the Army. He promoted MacArthur to lieutenant general and named him commander of U.S. Army Forces in the Far East.

On December 7, 1941, the Japanese launched a surprise attack on U.S. military facilities at Pearl Harbor, Hawaii. Japanese forces next launched air raids on the Philippines. With half of MacArthur’s air force destroyed on the ground, Japanese forces invaded and conquered the Philippines. MacArthur was awarded the Medal of Honor for his defense of the Philippines and, before he evacuated, he declared, “I shall return.” MacArthur organized American forces in Australia and launched a counter-attack in New Guinea. Coordinating with the Navy, he helped develop a new form of warfare he called “Triphibious Warfare,” or island-hopping. This strategy involved bypassing, or “hopping,” over areas where the Japanese were strong. The strategy succeeded and, in 1944, the Americans prepared to take back the Philippines. On October 20, 1944, MacArthur waded ashore along with an invasion force on the Filipino island of Leyte, declaring, “I have returned.” On December 14, 1944, MacArthur was promoted to general of the army, making him one of only a handful of individuals to achieve the five-star rank.

Japan surrendered in August 1945 and MacArthur accepted the formal surrender aboard USS Missouri (BB-63) on September 2, 1945. President Harry Truman then appointed MacArthur the military governor of Japan. He acted as the island nation’s political ruler through Japanese Emperor Hirohito. MacArthur presided over war crimes trials, demilitarization, and the creation of a new Japanese constitution. Power transferred back to the Japanese when the Allied occupation ended in April 1951.

MacArthur answered the call to service another time when President Harry Truman appointed him commander-in-chief of United Nations forces during the Korean War on June 25, 1950. MacArthur successfully counterattacked North Korean forces at Inchon and pushed the enemy back to the Yalu River, the North Korean border with China. U.N. forces were pushed back by a massive enemy attack when China entered the conflict. After publicly disagreeing with President Truman about the conduct of war, MacArthur was relieved of his command on April 10, 1951.

MacArthur retired from the military in 1951, ending 52 years of service. He spent the rest of his life raising his son while offering advice to various military and civilian officials. He died on April 5, 1964 at Walter Reed Army Medical Center. Though a controversial figure, MacArthur significantly contributed to American military achievements in World War I, World War II, and the Korean War. His decades of service stand as one of the storied chapters in Army history.