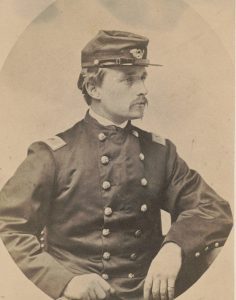 During the Civil War, many abolitionists in the North advocated for the immediate freedom of all enslaved persons. Yet some members of abolitionist families were more reluctant advocates, such as Col. Robert Gould Shaw. Though initially dispassionate, Shaw’s views on slavery evolved during his time with the 54th Massachusetts Infantry Regiment, a unit of United States Colored Troops (USCTs). Killed in action while leading the 54th, Shaw’s service, valor, and evolving views illustrate the situations faced by white and Black Soldiers in the Civil War.

Shaw’s parents, Francis George and Sarah Blake Shaw, were prominent evangelical Boston abolitionists. In 1838, a year after Shaw’s birth, they joined the American Anti-Slavery Society and organized abolitionist activities through their church. In 1847, the Shaws moved to Staten Island, New York to work with other abolitionists. However, the young Shaw lacked the same zeal his parents had for abolitionism. Shaw attended preparatory school but dropped out and the family left to travel in Europe in 1851.

While in Europe, Shaw’s attitude towards enslavement changed. He read Harriet Beecher Stowe’s abolitionist novel “Uncle Tom’s Cabin,” which moved him to change his opinion on abolitionism with its shocking portrayal of the horrors of enslavement. Shaw also developed a renewed sense of patriotism when he heard anti-American views expressed by some Europeans. In 1856, he returned to the United States and attended Harvard University. But again, Shaw was not satisfied with academic pursuits, writing to his mother, “I hate Cambridge.” He left Harvard in 1859 and joined a mercantile firm on Staten Island.

When the Civil War began in April 1861, Shaw seemed to find a cause he believed in. He joined the 7th New York Militia as a private and served with them for 30 days, defending Washington, D.C. After his brief enlistment ended, Shaw decided to join the 2d Massachusetts Infantry Regiment. On May 28, 1861, he was commissioned as a second lieutenant. For the next two years, Shaw fought with the regiment in several battles, including the Battle of Antietam where he was wounded. After the battle, President Abraham Lincoln issued a preliminary Emancipation Proclamation, which granted freedom to all enslaved people in the Confederacy. It also opened the door for African American service in the Army through the formation of the United States Colored Troops (USCT).

In early 1863, Governor John A. Andrew of Massachusetts began recruiting efforts for the 54th Massachusetts, a unit of African American Soldiers who were to be led by white officers. A friend of the Shaw family and an abolitionist himself, Andrew wanted someone who passionately believed in the ability of Black Soldiers to fight effectively. He chose Shaw to lead the regiment. Although initially reluctant to leave his comrades in the 2d, Shaw accepted the offer at the urging of his parents.

Shaw arrived in Boston on February 15, 1863, to begin training the recruits for the 54th. Although he privately held doubts about Black Soldiers, Shaw devoted himself to the task. The men of the 54th, made up of formerly enslaved and free African Americans, surprised him. In March, Shaw wrote to his father, stating, “The intelligence of the men is a great surprise to me… There is not a doubt that we will leave the State with as good a regiment as any that has marched.” As Shaw spent more time with his men, he continued to evolve in his views. Upon learning that Black Soldiers in the unit were paid less than their white counterparts, he organized a boycott of wages until they received equal pay. Shortly before he deployed, Shaw was promoted to colonel and he married Anne Kneeland Haggerty.

On May 28, 1863, after months of training, the 54th marched through Boston and boarded a transport ship to Port Royal, South Carolina. Once in Port Royal, the unit was ordered to unload supplies at the docks. Shaw complained that the unit was only being used for manual labor. On June 11, the 54th joined another USCT unit, the 2d South Carolina Volunteers, for a raid on the town of Darien, Georgia. Again, Shaw complained that his regiment was being denied honorable combat duties.

On July 16, the 54th fought on James Island at the Battle of Grimball’s Landing. They performed well but their true test came two days later at the Second Battle of Fort Wagner. Shaw led a frontal assault of the Confederate fort on July 18, 1863. With only one regiment able to attack at a time, the enemy opened fire on the approaching men of the 54th. As men began to fall, Shaw raised his sword and shouted “Forward, Fifty-Fourth, forward.” The colonel scaled the outer wall with the men of the 54th but enemy fire pierced him several times when he reached the parapet. Shaw died early on in the assault and the Confederate defenders repulsed the Union attack with heavy losses. The 54th Massachusetts suffered over 300 casualties.

After the battle, Confederate General Johnson Hagood ordered Shaw to be buried in a mass grave with the bodies of the Black Soldiers he commanded. Intended as an insult, as it was customary for the bodies of white officers to be returned to their families, the Shaw family felt otherwise. For them, there was no greater honor for their son than to be buried with Black Soldiers. His father later wrote, “We would not have his body removed from where it lies surrounded by his brave and devoted soldiers…what a body-guard he has!” Shaw died a hero in the eyes of his family and the Soldiers he commanded.