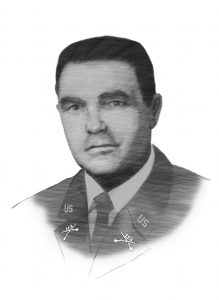 Captain Adamo E. De Angelis was a U.S. Army Soldier in the 12th Cavalry. After serving in the Korean War, he continued his service as the Army fought in the Vietnam War. There, De Angelis believed that his experience would benefit less experienced Soldiers. While on a command and control mission to display American authority over an area, the UH-1D “Huey” helicopter carrying De Angelis and nine other Soldiers sent out a “MAYDAY,” or emergency call. An hour after leaving their base in Tah Ninh, Vietnam, the helicopter crashed killing all those onboard. De Angelis’ dedication to the U.S. Army was cut short during this mission, but his sacrifice was one of thousands of accidental deaths during the Vietnam War.

At the age of 18, Adamo Ermino De Angelis enlisted into the Army, entering service through the National Guard. After completing his service as a volunteer in the Korean War, he began his Vietnam War tour on December 29, 1968. De Angelis served as a captain in the Headquarters Co., 1st Battalion, 12th Cavalry Regiment, 1st Cavalry Division. When he deployed, De Angelis left behind his wife, Mary, and two children in their Ramsey, New Jersey home.

De Angelis joined a war that was already underway. The U.S. had been formally involved in the Vietnam War efforts beginning in May 1950 but would not officially enter the war until March 1965. Fought between North and South Vietnam, the war pitted Communist-backed North Vietnam, supported by the Soviet Union and China, against South Vietnam and their anti-Communist supporters, including the United States, South Korea, Australia, and several other countries. The origin of the Vietnam conflict began as a dispute between the communist-led Viet Minh and the French. After France’s withdrawal from the area in 1954, the U.S. took over to provide military aide to South Vietnam and the anti-communist organizations there.

As President John F. Kennedy took the Presidential Oath of Office in 1961, he increased the United States’ role in South Vietnam. Due to the growing insurgency throughout Vietnam, Kennedy took on a flexible military response system, aimed at responding to individual insurgent attacks. Yet, they limited the long-term strategic planning for overall success during the Vietnam War. Complicating matters, the United States also faced the threat of the Cold War and potential nuclear attacks by the Soviet Union and Cuba at the same time.

As the Vietnam War continued to rage, the United States enlisted the use of military helicopters to join the battle. Dense jungles and difficult terrain complicated U.S. mobility throughout the war zones in Vietnam and Cambodia. Deciding that the service of air transport units and air combat units would be beneficial, the U.S. Army began testing the use of helicopters for combat operations in 1963. By 1965, the first in-combat tests began in Vietnam.

This addition of air assault and transport units to the war effort also helped the Army advance its aviation capabilities. During the 1950s, the Army-Air Force agreements and the Department of Defense restricted the size and weight of Army aircraft, limiting where they could operate. As the Army began to arm their air vehicles, the Army and the Air Force re-evaluated their roles in mission assignments. In 1966, the two branches decided that larger aircraft would go to the Air Force, but the Army would keep their helicopters. This came about because the helicopters were valuable in ground combat operations.

The Bell Company was the original creator of the Huey, or UH-1 Iroquois Helicopter. First developed in the mid-1950s, more than 16,000 helicopters were built between 1955 and 1976. In 1966, the U.S. Army had roughly 2,700 helicopters. By mid-1971, they had over 9,500. The United States was not the only country to use Huey Helicopters, at least 48 other countries bought Hueys for their own military use.

On October 31, 1969, the UH-1H tail number 66-16650 went on a command and control mission for a battalion of the 1st Brigade, 1st Cavalry Division. This mission was intended to survey the Army’s surroundings and exercise the authority of the Army over the area. It finished its first mission and landed at the Tah Ninh helicopter pad. Once it landed, De Angelis and nine other members of the 1st Cavalry Division boarded the helicopter at 8:30 a.m. The helicopter took off, along with a gun helicopter, also known as a bird, and two scout birds. At about 9:30 a.m. De Angelis’ helicopter sent out a mayday call. Witnesses from the other helicopters saw the craft go into a steep descent, crash into the ground, and burn. They also reported that the main rotor blades of the UH-1H stopped while the craft was between 300 and 500 feet above the ground and that the helicopter exploded upon impact with the ground.

The two scout birds moved into the area where the helicopter crashed, searching for survivors. The other helicopter relayed coordinates and information about the crash to Army officials. Unfortunately, all ten Soldiers on board the helicopter, including De Angelis, lost their lives in the crash. The cause of the crash was later determined to be a transmission failure. Originally noted as missing in action, De Angelis’ remains were located in January 1970 and his widow was notified of his reclassification as deceased on January 30, 1970.

Before his death, De Angelis received the Bronze Star Medal, Air Medal, and Purple Heart, among other awards. After his death, he received the Silver Star for gallantry in action. De Angelis was laid to rest at Maryrest Cemetery in Mahwah, New Jersey. He is further memorialized at the Vietnam Veterans’ Memorial in Washington, D.C. His legacy lives on as one of the over 58,000 Americans who lost their lives during the Vietnam War. To honor those, like De Angelis, who lost their lives to helicopter crashes during the Vietnam War, a special memorial was erected at Arlington National Cemetery. Formally dedicated on April 18, 2018, the Vietnam Helicopter Pilot and Crewmember Monument memorializes the ultimate sacrifice that U.S. Soldiers, like De Angelis, made during the Vietnam War.