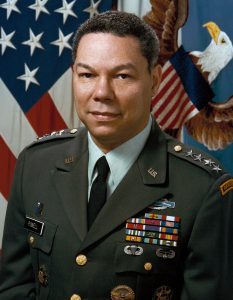 The United States Army has seven core values: loyalty, duty, respect, selfless service, honor, integrity, and personal courage. Together, they form the acronym LDRSHIP or leadership. The Army defines leadership as “anyone who by virtue of assumed role or assigned responsibility inspires and influences people to accomplish organized goals.” Throughout his 35-year Army career, Colin Powell consistently exhibited the seven core values as well as extraordinary leadership ability. His stellar military reputation led him to enter the world of politics and become one of the most respected diplomats in American history.

Colin Luther Powell was born in Harlem, New York, on April 5, 1937, to Jamaican immigrant parents. Described early on as affable but aimless, Powell was a personable student who did well with order and discipline but never truly excelled at school. He attended the City College of New York to fulfill his parents’ expectations. However, he did not feel like he fit in until he joined the Reserve Officers’ Training Corps (ROTC). With ROTC, Powell discovered an organization that he was passionate about and that played to his strengths. He graduated with a degree in geology and soon after was commissioned as a second lieutenant in the Army on June 30, 1958.

2nd Lt. Powell completed basic officer training at Fort Benning, Georgia, where he graduated in the top 5% of his class. He was then selected for continued education at Ranger School and Airborne School and later deployed as an Army Airborne Ranger in Gelnhausen, West Germany. It was there that he joined the 2d Rifle Battalion, 48th Infantry Regiment, Third Armored Division as a platoon leader. Powell’s time in West Germany set the standard for his leadership style: detail and goal-oriented, firm but fair, but, above all, conforming. He spent his early career working hard to fit in, observing how both his enlisted subordinates and officer superiors led their Soldiers effectively.

Powell deployed to Vietnam twice. The first deployment was from 1962 to 1963, and the second was from 1968 to 1969. During his first tour, then-Cpt. Powell was the senior tactical advisor to the Army of the Republic of Vietnam. It was here he learned to hone and adapt his behavior to best work with the Vietnamese commanders’ leadership styles—a practice he continued for the rest of his military and political careers. By his second tour, Powell had been promoted to major and served as the assistant chief of staff of operations for the 23d Infantry Division (Americal). His managerial duties included transporting infantrymen, weapons, and supplies to the battlefield. Maj. Gen. Charles M. Gettys, commander of the Americal Division (a contraction of “American, New Caledonian Division,” where the division was first activated in May 1942) praised Powell’s effectiveness and stated that Powell “in an amazing [sic] short time, revised and strengthened existing procedures, and required high-performance standards…thereby creating a higher state of morale among the troops in the field.” Powell eventually oversaw planning for close to 18,000 troops, multiple artillery units, aviation battalions, and a fleet of 450 helicopters.

He continued to rise through the ranks after returning home from Vietnam. He spent the 1970s and 1980s working in numerous high-level offices such as the Office of the Assistant Vice Chief of Staff of the Army and the Office of the Secretary of Defense. He was consistently recognized as a loyal, diligent, and unquestioning Soldier throughout both military and political circles. His reputation led President Ronald Reagan to appoint him national security advisor in 1987, and on October 1, 1989, President George H.W. Bush appointed him chairman of the Joint Chiefs of Staff. He was the youngest officer, first ROTC graduate, and first Black American, ever appointed to the role.

Powell’s reputation as a decisive and skilled military organizer and strategist was put to the test during his tenure as chairman. The Cold War was coming to an end and the United States was on the brink of the Persian Gulf War. As such, his chairmanship saw more changes than most of his predecessors. It was his responsibility to oversee and direct some of the most significant shifts in American military strategy since World War II, including a 25% reduction in the size of total armed forces.

Despite the reduction in the overall number of American armed forces, Powell was instrumental in the planning and success of Operations Desert Shield and Desert Storm during the Gulf War. He not only oversaw the deployment of 250,000 American troops to Saudi Arabia but encouraged President Bush to keep diplomatic and economic options open as well to ensure American victory. He is widely credited as the driving force behind Operation Desert Shield. He stressed the importance of not sending a partial deployment to Saudi Arabia; if forces were going to be sent, there needed to be enough troops to easily defeat the Iraqi army should war commence. This way of thinking came to be known as the Powell Doctrine; to go into a situation with a clear plan and goal, accomplish the goal, and then get out as quickly and safely as possible. His actions throughout the ordeal led to him being awarded a Congressional Gold Medal and the Presidential Medal of Freedom.

Powell retired from the Army as a general on September 30, 1993. He spent seven years in civilian life before President George W. Bush appointed him secretary of state. He was unanimously confirmed and took office on January 20, 2001. The terrorist attacks on September 11, 2001 thrust Powell back into the spotlight, but this time on the side of diplomacy. He was tasked by President Bush with making the case for war against Iraq to the United Nations on February 5, 2003. He rose to the challenge and delivered a persuasive presentation against Saddam Hussein and the Iraqi government. His speech, however, would be, in his own words, “a blot on my record.” Some of the intelligence referred to in his speech regarding weapons of mass destruction was, in fact, wrong. Powell himself stated later, “I understood the consequences of that failure and…I deeply regret that the information—some of the information, not all of it—was wrong.” Powell resigned as secretary of state in November 2004 and left office in January 2005.

Again a civilian, Powell served on the boards of directors of many organizations including the Council on Foreign Relations, the Eisenhower Fellowship Program, and the Powell Center at the City College of New York. He was frequently called on for his opinion on military matters such as the treatment of prisoners at Guantanamo Bay and the repeal of “Don’t Ask, Don’t Tell,” as well as his observations on presidential administrations and their policy-making decisions.

General Colin L. Powell died at the age of 84 from complications due to Covid-19 on October 18, 2021, at Walter Reed Medical Hospital. He spent 63 years of his life striving to uphold the Army’s core values and earn his fellow Soldiers’ respect as both a military and diplomatic leader. Since his death, he has been heralded as the most popular general of the 20th century after General Dwight Eisenhower. While a skilled diplomat, he will doubtlessly be remembered for his zeal for Army life, and it was truly his calling to help build the future of the institution. Former Deputy Secretary of State Richard Armitage stated Powell’s love of tinkering and fixing things, particularly in the Army, when he said “there was a result at the end of the day. It’s why he was so happy as an Army officer. You take a platoon, and you make it better.”

“What Was the Powell Doctrine?” Carnegie Council for Ethics in International Affairs. Accessed January 28, 2022. https://www.carnegiecouncil.org/education/008/expertclips/005.

DeYoung, Karen. “Falling on His Sword: Colin Powell’s Most Significant Moment Turned out to Be His Lowest.” Washington Post, October 1, 2006. https://www.washingtonpost.com/archive/lifestyle/magazine/2006/10/01/falling-on-his-sword-span-classbankheadcolin-powells-most-significant-moment-turned-out-to-be-his-lowestspan/0574eff4-0137-4c0a-8e6b-f8bf7575f389/.