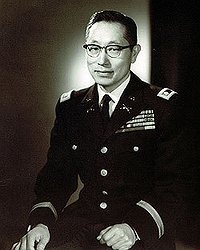 Korean American Army officer Young Oak Kim fought in World War II and the Korean War. Despite experiencing racism throughout his Army career, Kim persevered and became one of the most decorated Asian Americans in U.S. military history. Through his career, Kim provided inspiration for Korean and other Asian American soldiers who followed in his footsteps.

Kim was a first generation American born into a Korean family on January 26, 1919, in Los Angeles. Raised with a great sense of patriotism, Kim’s path to the Army was a complicated one. Anti-Asian sentiments were common when he was growing up, and the military often rejected Asian Americans who wanted to enlist. This changed when World War II broke out in Europe in 1939. Congress passed the Selective Training and Service Act of 1940 and all able-bodied men, regardless of race, were subjected to the draft. Kim’s draft number was one of the first called and he entered the Army in January 1941.

Due to widespread racism in the Army, Kim was initially denied combat rolls. An officer even told him that his “eyes were the wrong shape and his skin was the wrong color.” However, his superiors recognized his talents and eventually selected him for Officer Candidate School at Fort Benning, Georgia. After graduating in February 1943, his first assignment was as the second platoon leader of Company B, 100th Infantry Battalion (Separate) at Camp Shelby, Mississippi.

The Army created several segregated units during World War II including the 100th Infantry, composed mainly of  second generation Japanese American Soldiers, or Nisei, from Hawaii. After the attack on Pearl Harbor, the Nisei Soldiers were seen as a “threat to national security” and were shipped to the mainland for fear of additional Japanese attacks.

Upon Kim’s arrival in Mississippi, the commander offered him a transfer since “Koreans and Japanese don’t always get along,” due to Japan’s annexation of Korea between 1910 and 1945. But Kim refused to go anywhere. “You’re wrong,” he replied, “they’re Americans, I’m American, and we’re going to fight for America.” Their introduction, however, was not a smooth one. Kim thought the unit looked messy and disorganized. The men of the 100th Infantry didn’t think too much of Kim either; he was a mainlander, he was Korean, and he had not earned his commission at a service academy. Eventually, they bonded over their determination to succeed in combat. “We had to be as good as any other Caucasian outfit,“ Kim later recalled, “…and if we did it well, we’d get the credit.” To ensure his men would be ready once sent overseas, Kim taught them using aggressive tactics that simulated actual combat.

When Kim arrived in Italy in September 1943, he and the 100th Infantry joined the 34th “Red Bull” Division of the U.S. Fifth Army, led by Lt. Gen. Mark Clark. Thanks to their training, they distinguished themselves immediately while fighting in some of the bloodiest battles of the Italian campaign. The 100th Infantry soon earned the nickname “the Purple Heart Battalion” due to the high rate of casualties they sustained. Clark singled Kim out as an “able and hard-boiled” Soldier. Soon after his arrival in Italy, Kim earned his first Silver Star and Purple Heart after sustaining injuries fighting outside of Santa Maria Oliveto.

One of Kim’s greatest accomplishments occurred in Anzio, Italy, where he and another Soldier went on one of the most daring raids of the entire campaign. They left their command post and crawled several hundred yards to a German outpost. They managed to take two enemy soldiers prisoner and, in broad daylight, forced them to crawl back to the American command post for interrogation. This raid led to the discovery of essential intelligence used to liberate Rome in June 1944. For his bravery and courage, Kim was awarded the Army’s second highest decoration, the Distinguished Service Cross.

After leaving Italy, Kim and the 100th Infantry, now part of the 442d Regimental Combat Team, another segregated Japanese American Nisei regiment, went to France in October 1944. There they led an attack that secured the towns of Bruyères and Biffontaine. Kim was injured by enemy fire at Biffontaine and was sent back to California to recuperate. Germany surrendered before he was able to return to Europe, but Kim was awarded his second Purple Heart and the French Criox de Guerre for his service.

Kim left the Army after World War II but rejoined in 1950 when war broke out in Korea. He was sent to Korea in 1951 as part of the 31st Infantry of the 7th Infantry Division, his first non-segregated unit since the desegregation of the military in 1948. There he commanded a South Korean guerrilla unit and also took part in the United Nations Forces’ final drive into the north. He was awarded his second Silver Star for his actions. He was also promoted to the rank of major, which made him the first Asian American to ever command a battalion in combat.

Kim left Korea in 1952 and later worked as an instructor at Fort Benning, Georgia and at the U.S. Army Command and General Staff College at Fort Leavenworth, Kansas. He was promoted to colonel in 1965, and retired from the Army in 1972. He remains one of the most highly decorated Asian American soldiers in U.S. history, having been awarded 19 medals, including a variety of honors from Italy, France, and Korea.

Kim spent the rest of his life helping others. He established and supported several non-profit organizations that focused on Asian and underserved communities in Southern California. He died of cancer on December 29, 2005, at the age of 86. Upon his death, U.S. Senator Daniel Inouye of Hawaii, who knew Kim from the 442d, said, “there was one name that always commanded attention and respect: Capt. Kim’s. He was a bona fide hero of the 100th Infantry Battalion…he was such a fearless leader who, through his deeds, inspired his men.”