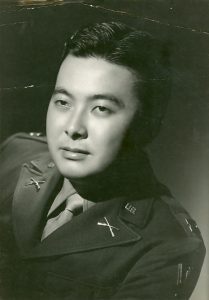 On December 7, 1941, hundreds of hostile Japanese planes soared through the skies of Hawaii towards Pearl Harbor. As the Japanese attacked American ships and facilities, a 17-year-old high school senior preparing for church looked on in horror. Three Japanese planes flew right over his head as he watched the attack unfold. Later, he rushed to a nearby Red Cross station to assist the wounded. Less than four years later, the same man, 2d Lt. Daniel K. Inouye, led a platoon of Soldiers near San Terenzo, Italy. As they moved towards the village, enemy machine guns opened fire on the platoon. A bullet pierced his chest but he calmly gave orders to his men to advance on the enemy position. Inouye refused to let his wound get in the way of helping others, an attitude he carried with him before, during, and after World War II.

Born on September 7, 1924, in Honolulu, Hawaii, Daniel Ken Inouye grew up in a Japanese American community. His father, Hyotaro Inouye, was an Issei, a Japanese immigrant. His mother, Kame Imanaga, was a Nisei, the child of Japanese immigrants. From a young age, Inouye noticed his family received different treatment due to their Japanese ancestry. His mother even lost her citizenship when she married his father due to a number of laws which discriminated against women and Japanese immigrants. When the Japanese attacked Pearl Harbor, Inouye remembered that he felt angry, stating, “…to think that my future was now destroyed because of the stupid act on the part of the Japanese… these people who looked like me, dropped those bombs and, therefore, had an impact on my future.”

Made up of mostly Nisei Soldiers and led by almost all white officers, the 442d spent over a year training at Camp Shelby, Mississippi. Inouye was quickly promoted to sergeant. After completing training, the 442d deployed to the Italian theater. They arrived at Anzio, Italy, on May 28, 1944, and were attached to the 34th Infantry Division. Inouye experienced his first taste of combat at the Battle of Belvedere on June 26, 1944. The unit performed well and they continued to fight with the 34th until they redeployed to France in September. While there, Inouye and the 442d rescued the “Lost Battalion,” a unit of the Texas National Guard trapped behind enemy lines. They engaged in heavy fighting with German forces, suffering significant casualties. During the battle, enemy fire hit Inouye in the chest but a silver dollar in his chest pocket deflected the bullet, saving his life. For his conduct during the battle, Inouye was awarded a Bronze Star and promoted to second lieutenant.

In 1945, the 442d returned to Italy to participate in offensives against the well-defended Gothic Line, a series of enemy defensive positions in northern Italy. On April 21, 1945, enemy machine guns opened fire and struck Inouye in the chest as he and his men approached the village of San Terenzo. Showing no visible signs of his wound, he led his men forward. Approaching an enemy bunker, Inouye used his sub-machine gun and grenades to kill two German machine gun crews. As he raised another grenade to throw at a third German position, an enemy grenade hit Inouye, resulting in the loss of his arm. To Inouye’s dismay, he noticed the primed grenade still clutched in his disembodied fist. Despite his wounds, he ordered his men to stay back and transferred the primed grenade to his remaining hand. He threw the grenade at the enemy and continued to fight with his sub-machine gun. Enemy fire hit him in the legs and he passed out. Doctors believed his injuries would prove fatal but, after surgery and 17 blood transfusions, Inouye survived. He was awarded the Distinguished Service Cross and promoted to captain for his valor. With his right arm amputated, his dream of becoming a doctor died. However, Inouye’s desire to serve and help others did not.

After the war, he married Margaret Shinobu Awamura and earned degrees in government, economics, and law. In 1959, when Hawaii became a state, Inouye served as one of its first congressmen. In 1962, he was elected as a senator for Hawaii, serving for over 40 years. Inouye was the first Japanese American in both the House of Representatives and the Senate. On June 21, 2000, President Bill Clinton awarded Inouye the Medal of Honor for his actions in Italy, an upgrade of his Distinguished Service Cross. Inouye continued to serve in the Senate until his death on December 17, 2012. His life-long patriotic service stands as a testament of the achievements of Japanese Americans.