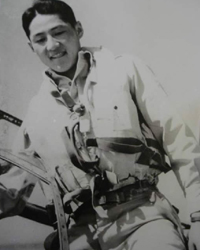 Fred F. Ohr was born in Portland, Oregon, on July 15, 1919, to Korean immigrant parents. Ohr’s father fled Korea following its annexation by Japan in 1910. His father, whose family originally belonged to the upper class of Korea, was wanted for execution by the Japanese. His father immigrated to the west coast of the United States and eventually found work in a salmon cannery in Alaska. At the age of four, Ohr and his family moved from Oregon to the outskirts of Boise, Idaho. He had a rough childhood living outside of Boise. For years after their move, Ohr’s entire family (his mother, father, and sister) lived out of an eight-foot by ten-foot tent and survived almost purely by subsistence farming. His family did not have the financial means to purchase farming equipment, so they worked the land by hand.

The Will to Fly

Ohr was six years old when he saw an airplane for the first time; a biplane flown by the postal service. From that moment, Ohr knew he wanted to be a fighter pilot for the Army Air Corps. His mother supported his dream to be a pilot. She always said to him, “if the desire is great enough, it will happen.” While in his senior year of high school, he took his mother’s words to heart and joined the Idaho National Guard with the 116th Cavalry, which gave him valuable military experience. Soon after he joined the 116th Cavalry, the regiment was inducted into the federal service and converted to artillery. The regiment’s induction to federal service also allowed Ohr to attend two years of college.

By fall 1940, Ohr had achieved the rank of sergeant and was stationed at Fort Warren in Cheyenne, Wyoming (now Francis E. Warren Air Force Base), working as a radio communicator. Ohr had not given up on his dream of becoming a fighter pilot, but he had to contend with rigid military structure and prejudice to achieve his goal. The first time he walked into a recruiter’s office to join the Army Air Corps, he was pointed to the door without a word by the recruiter. When Ohr attempted to join the Navy to become a machinist, the recruiter ridiculed him. Ohr responded by “letting him have it” verbally, causing him to be chased out of the recruiting office.

Ohr’s big break came when his fellow radio communicator, Leon, was accepted into the Army Air Corps. Leon, nervous about taking the entrance exam, invited Ohr to go with him. Knowing the prejudices against people of Asian descent at the time, Ohr did not believe it was the best idea to go with him to the exam. After deliberating for a time, he decided to go with Leon. Arriving early at the exam site, he felt it was best to keep his distance from Leon. He sat in one of the lobby’s wicker chairs and hid behind a newspaper. After a few minutes, a colonel approached Ohr. For reasons unknown to him, the colonel handed Ohr an aviation cadet application. Soon, Ohr took the exam himself. He passed and officially became an aviation cadet in September 1941.

Ohr graduated from aviation cadet school in 1942 and was assigned to the 68th Material Service Squadron at Daniel Field in Augusta, Georgia. Though this assignment was not ideal for Ohr because he would not be flying, he did not let it deter him from his dream to become a fighter pilot. In fall 1942, his squadron was sent to England to prepare for a deployment to Tunisia in North Africa. Once in North Africa, Ohr again met with prejudice. When he arrived in North Africa as another potential pilot, his commanding officer saw Ohr as both competition and a means to advance his career. He assigned Ohr as the maintenance officer, but never provided him any training on the position, purposefully stalling Ohr’s military career.

Following the Allies’ defeat at the Battle of Kasserine Pass in February 1943, German General Erwin Rommel’s forces began to advance toward Ohr’s position. As the artillery shells began to land nearby, Ohr and his commanding officer decided to flee in the two P-40 Thunderbolts left on the ground. His commanding officer took off from the airfield almost without a word. Ohr had never flown a P-40 before and, to make matters worse, the plane was in disrepair and caught fire shortly after he got in the air. Ohr was forced to make an emergency landing back on the airfield. Knowing the German troops were quickly approaching, Ohr made it his mission to destroy any fuel tanks and other war-materiel before it could fall into enemy hands. Luckily, a troop transport truck came back to the airfield to rescue him before the Germans arrived.

Ohr’s arrival in his new fighter squadron was not well-received and the squadron leader was not overly enthused with the prospect of training Ohr on the job. There was no final exam after the training. Instead, the squadron commander told Ohr that he would pass if he returned from his first mission. He did return after his first mission and proved himself a capable fighter pilot throughout his remaining service in the war.

Ohr achieved his first aerial victory over Sicily in 1943. Over the course of the war, Ohr scored five more aerial victories and destroyed 17 aircraft on the ground. His actions made him an “ace” (a pilot who scores more than 6 “kills”) and the only known Korean-American fighter pilot of the Second World War. Ohr was a gifted pilot who flew more by the feel of the plane than by the gauges. In total, he participated in 15 military campaigns across North Africa and Italy, flying 155 missions. For these actions, Ohr was awarded the Silver Star with one Oak Leaf Cluster, the Distinguished Flying Cross with one Oak Leaf Cluster, the Bronze Star, and the Air Medal with 18 Oak Leaf Clusters. When he left his squadron in November 1944, he had achieved the rank of major and was the well-respected commander of the 2d squadron, 52d Fighter Group.

Ohr returned home to Idaho in December 1944, his first time home in four years. In January 1945, he met, Esther Kang, a graduate student in Chicago. Ohr gave up his career as an Army pilot to start a family with Esther. The couple married in 1946 and raised a son, Roger, and two daughters, K.J. and Tamara. Following the war, Ohr attended college at the University of California, Berkley and dental school at Northwestern University. He established his Chicago dental practice in 1950 and operated it for 53 years until retiring in 2003 when Esther became ill. Fred Ohr passed away on September 16, 2015.