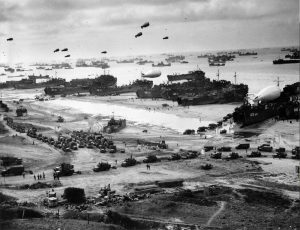 The World War II Allied invasion of Normandy, France on June 6, 1944—codenamed Operation Overlord—was the largest military operation ever attempted. By the time the invasion was launched, the Nazis occupied virtually every country in continental Europe. The Allies had to retake France if they were to be victorious. Following Operation Overlord, American forces launched Operation Cobra, pushing beyond the beaches of Normandy into the French mainland. 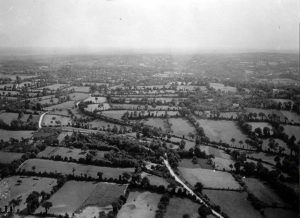 A complex pattern of hedgerows crisscrosses the Normandy countryside.

Soldiers faced some of the toughest obstacles of the war during Operation Cobra: dug-in German troops, terrible weather that frequently prevented air support, and the stubborn French bocage, or hedgerows. World War II-era Normandy was mostly farmland—a patchwork of irregular fields divided by ancient country lanes sunk into the earth after centuries of use. Towering hedgerows guarded each lane, long earthen berms so overgrown with brush and trees they were impossible to see through. The Nazis defended the French interior by using these natural structures as bunkers and barricades. The bocage posed an especially serious problem for advancing Army tanks. The tanks made numerous attempts to drive over them, but as the crested the hilly barriers, their guns would be pointed skyward and their undersides exposed to German anti-tank rockets. But without tank support, Allied forces would be doomed to languish on the Normandy beachheads, unable to penetrate the Axis defense. 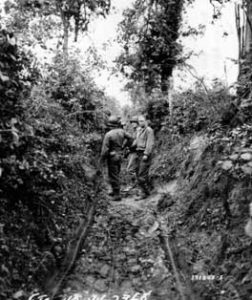 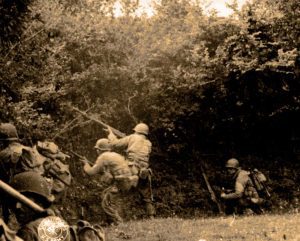 Most American Soldiers were not familiar with the dense hedges. They used tanks to ram the berms with hollow rods. Combat engineers would then place explosives in the holes. However, they didn’t have nearly enough explosives to destroy all the hedges they would encounter, and the explosions drew unwelcome attention from German artillery. The Americans also used “dozer” tanks—regular tanks equipped with a bulldozer blade—to power through the thickets of earth and undergrowth. Every D-Day battalion had approximately 70 tanks, four of them being dozers. Although these modified vehicles could clear the hedgerows with some effort, they were highly visible, and German anti-tank squads made them target number one. 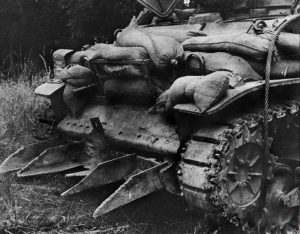 Sgt. Curtis Cullin’s hedgerow cutter, or Rhino device, affixed to a Stuart Light Tank, Normandy, 1944. The invention earned its nickname due to the prongs’ resemblance to rhinoceros horns.

The most effective solution was also the most famous. Most often attributed to Sgt. Curtis Cullin of the 102nd Cavalry Reconnaissance Squadron, the “Rhino”-tank was a clever repurposing of German defensive hardware. Using scrap steel recovered from a bombed out Nazi roadblock, Cullin fashioned a set of large prongs, shaped like the end of a fork, which he attached to the front of a tank. The tank accelerated up the berm and cut through the thick brush as if it were cardboard. 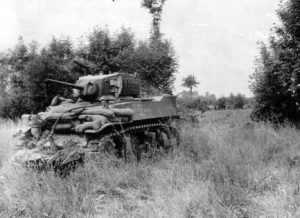 A Rhino tank punches cleanly through a tall hedge. 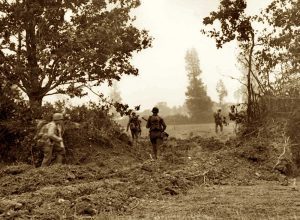 American troops advance through a gap in a hedgerow, carved out by a Rhino tank.

When Gen. Omar Bradley, commander-in-chief of American ground forces during the Normandy invasion, saw Cullin’s invention at work, he ordered them into full-scale production. Soldiers collected the iron anti-tank jacks the Nazis had scattered across Normandy’s beaches and transformed them into hedgerow cutters, which were bolted to virtually every tank in the First Army. Bradley made certain the Rhino tanks were not used until the launch of Operation Cobra. Their effectiveness—further enhanced by the element of surprise—gave the American forces an important morale boost and helped them push deep into German territory. The Rhino tank was so helpful to the invasion that the 29 year-old Sgt. Cullin was awarded the Legion of Merit for its creation.