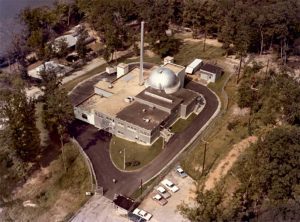 Aerial view of the Stationary Medium Power Plant 1 (SM-1) facility on a bluff overlooking Gunston Cove on the Potomac River approximately 20 miles from Washington, circa 1960.

Hidden in the woods at the southwestern edge of Fort Belvoir, Virginia, overlooking the Potomac River, sits the shell of the first nuclear reactor in the United States to be connected to a public utility grid. Access to Stationary Medium Power Plant 1, more commonly known by its Army designation SM-1, is restricted to technicians who enter the facility to monitor radiation levels. Consequently, the power station is largely overlooked by base personnel and is virtually unknown to the general public, despite being the first Department of Defense nuclear generating station devoted exclusively to peacetime use. 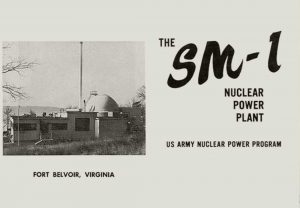 Looking west past the SM-1 containment dome across the Potomac River, from a U.S. Army Nuclear Power Program brochure.

SM-1 was the first power plant constructed under the oversight of the Army Nuclear Power Program (ANPP), an atomic energy program launched in 1954 and headquartered at Fort Belvoir. The reactor reached criticality—an engineering term describing a stable and sustained nuclear reaction—on April 8, 1957 and remained in constant operation until it was decommissioned in 1973. While the plant was notable for being the country’s first electrical grid-connected nuclear generating station, the bulk of its small two-megawatt output was consumed by Fort Belvoir itself. 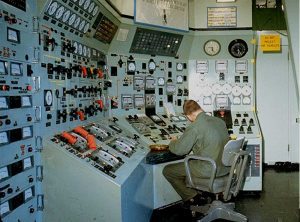 Control room of the PM-3A nuclear generating plant at McMurdo Station, Antarctica, circa 1965, based on the SM-1 control room at Fort Belvoir.

SM-1 was a compact or “package” reactor, a prototype plant built to test the usefulness of small-output, comnpartmentalized and portable nuclear power generation in distant places where accessibility was compromised and larger reactors were impossible to build. Because the target locations were so remote and resupply would be irregular at best, efficient power generation from non-fossil fuel sources was extremely important. The ANPP’s research at Fort Belvoir would yield seven more small-to-medium scale nuclear reactors in inhospitable locations like Fort Greely, Alaska, Camp Century, Greenland, McMurdo Research Station in Antarctica, and even aboard a barge moored in Gatun Lake on the Panama Canal. In almost all instances ANPP constructed these plants offsite and shipped yjr, , piece by piece, to their final destination. 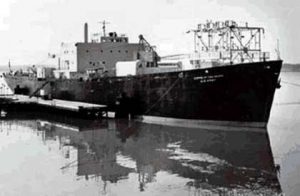 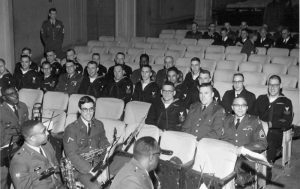 The Fort Belvoir reactor was also the centerpiece of the ANNP’s  Plant Operators Course, a demanding yearlong academic program that turned officers and enlistees alike into expert nuclear technicians. Many of the trainees had already earned advanced scientific degrees before serving in the Army. At SM-1, they took 55 hours of classical and modern physics, 64 hours of nuclear reactor engineering, 278 hours of nuclear process and research instrument education, 76 hours of advanced mathematics, 125 hours of electronics and solid state device instruction, a battery of courses devoted to mechanical and electrical engineering, and finally a whopping 718 hours of on-the-job training behind the control console of the plant itself. The ANPP trained some 800 operators over the life of the program, many of whom went on to helm nuclear generating stations at land and sea for the Army and Navy. Many transitioned to the civilian sector as well. 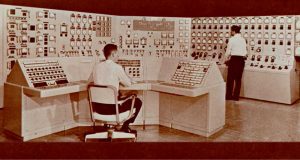 ANPP Operators train in the Fort Belvoir MH-1A simulator, an analog computer-powered, button-for-button copy of the control room aboard the Sturgis.

Half test-bed, half nuclear engineering school, Fort Belvoir’s SM-1 was decommissioned in 1973 and its nuclear core dismantled, after having served longer than any of the Army power plants that came after it. It was briefly opened to the public as a museum in 1975, and continued to serve as a training facility before being closed permanently in 1977. The cooling tower and containment dome are still visible from the Potomac River. SM-1, the birthplace of peacetime Army nuclear power generation, likely will be demolished around 2030, 50 years after it split its last atom.