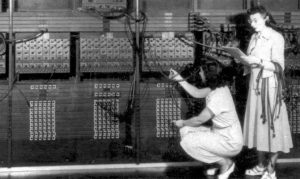 Widely considered to be the first electric, digital, general-purpose computer, ENIAC (Electronic Numerical Integrator and Computer) was one of the most influential technological innovations of World War II. It took the collective imagination, innovation, and hard work of many teams of scientists, engineers, mathematicians and laborers before the Army could launch the ENIAC project. Today’s era of universal personal computing is a direct result of their efforts.

An Unmet Need
By June 1943, Adolf Hitler controlled most of Europe. Allied forces were recovering from a grueling campaign in Northern Africa and preparing a daring invasion of Italy. Meanwhile in the Pacific, fighting continued island by island. On the home front, at the Ballistic Research Laboratory (BRL) in Aberdeen, Maryland, the U.S. Army was developing innovative new weapons technologies. A group of women nicknamed “computors” toiled on push-button calculators, executed complex mathematical formulas and created programs for hardware put together by engineers, mathematicians and scientists in the lab. They struggled to keep up with the demand for artillery firing tables—charts that helped Soldiers determine the best aim for their weapons. Without them, Soldiers couldn’t target effectively, resulting in wasted ammunition and even loss of life.

Calculating the trajectory of artillery is extraordinarily challenging. Wind speed, humidity, temperature, muzzle velocity, air density, elevation, and even the temperature of the gunpowder must be taken into account to get an accurate reading. Ballistics tables that worked in rainy Germany were useless in Algeria where climate and elevation were so different. To make matters even more difficult, new weapons were constantly being adopted, which required new calculations. The Army desperately needed an expedient way to create reliable ballistics charts. 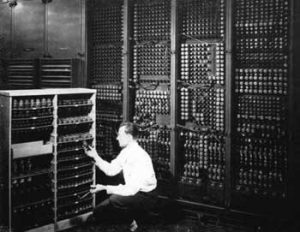 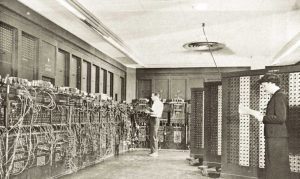 The Birth of Computing

At the University of Pennsylvania in Philadelphia, physicist John Mauchly and a 24-year old electrical engineer named J. Presper Eckert proposed that the Army provide them with the resources to construct a machine that would use digital electronic impulses transmitted through vacuum tubes to perform elaborate mathematical calculations. This new device would effectively allow a long series of calculators to communicate electronically—when one completed a calculation, the result was passed along to the next almost instantaneously. In 1948 the Electronic Numerical Integrator and Computer, or ENIAC, was born. 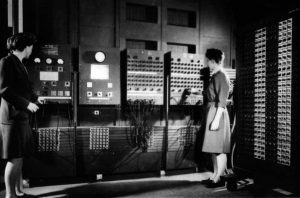 From Left Betty Jennings and Frances Bilas operate ENIAC’s main control panel while the machine was located at the University of Pennsylvania’s Moore School.

Calculations on a Massive Scale

In addition to ballistics, the Army applied ENIAC’s processing power to weather prediction, atomic energy calculations, cosmic ray studies, thermal ignition, random-number studies, wind tunnel design, and more. The Army made ENIAC available to universities free of charge, and it was put to use for a variety of civilian research studies. When the Army retired  ENIAC in 1955, it had been crunching numbers successfully for over 70,000 hours. 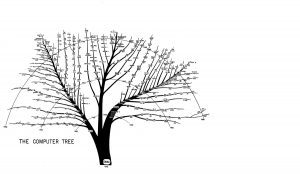 This diagram shows the influence of ENIAC on computers and related technology in the three decades after its invention. 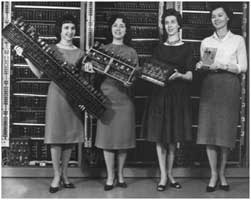 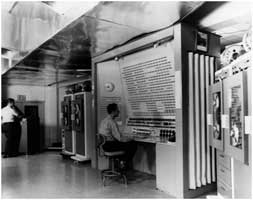 An operator seated at the console of BRLESC-1, an ENIAC descendant that came online in 1962. BRLESC-1 solved Army ballistics and logistics problems at a rate of five million operations per second.