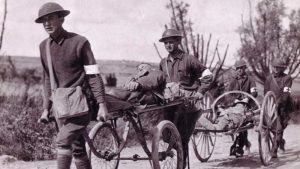 A wounded Soldier who receives medical attention within six hours of injury has their chances of survival increased by 600%. However, it wasn’t until the invention of the helicopter that air evacuation—the fastest method of personnel rescue—could be fully realized. A daring Army air rescue in Burma during World War II was the first ever instance of medical evacuation by helicopter, and set the stage for techniques and technologies that would be refined in future conflicts. 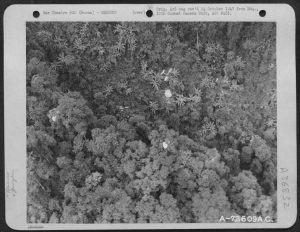 A Fairchild PT-19 down in Burmese jungle during World War II. Its crew awaits rescue via helicopter.

During World War II, the Empire of Japan invaded Burma, a country with dense jungles that is situated between India, China and Thailand. The Army charged the 1st Air Commando Group with penetrating behind enemy lines to attack high-value Japanese targets. In April 1944, Tech Sgt. Ed Hladovcak, 23, was flying three wounded Soldiers back to base for medical treatment when the Japenese attacked his Vultee-Stinson L-1 Vigilant plane. It went down in a rice paddy surrounded by jungle, deep in enemy territory. Hladovcak and the three wounded Soldiers struggled to escape the swampy, malaria-infested terrain. A liaison fixed-wing aircraft located them but was unable to land for the rescue. The men waited for four days in the relentless heat, tormented by mosquitoes, their wounds festering, and under constant threat by nearby Japanese. 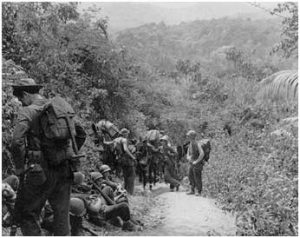 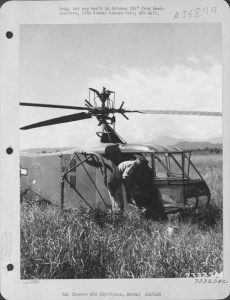 A Sikorsky YR-4B pilot assembles supplies in preparation for a salvage mission near Myitkyina, Burma, on October 24, 1947.

Lt. Carter Harman was the only available Army helicopter pilot in the region—the other four had been shot down or their aircraft grounded due to mechanical failure. Recognizing Harman as the only option, Army command took the bold step of sending the young pilot to rescue his fallen comrades. Helicopters, nicknamed “eggbeaters”, a recent invention, and Harman was among the first class of seven Soldiers qualified to pilot them. His rickety Sikorsky YR-4Bs Hoverfly had been sent to the Pacific Theater to carry aircraft parts and conduct similar logistical support operations. 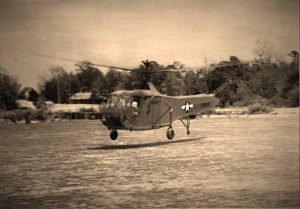 Lt. Carter Harman at the controls of the Sikorsky YR-4B Hoverfly that would complete the Army’s first air medical evacuation.

Harman wasn’t sure his sub-200-horsepower engine would make the trip. He also knew how vulnerable his craft was to enemy fire, being made of plywood ribs atop a steel tube frame. Virtually everything, including the fuselage, was covered only in fabric. The 500-mile trip demanded a climb over a 5000-foot mountain range—the YR-4B was rated only to 4000 feet and its recommended range was a mere 100 miles at a cruising speed of 65 mph. He would have to stop every hundred miles to refuel and navigate visually as there were no maps available. Harman also would make the journey solo, without on-board medical staff. The helicopter only had room for one other person, and he needed that space to transport the wounded Soldiers. Harman used a jerking movement, over and over again, to coax the aircraft off the ground. The Sikorsky struggled in the tropical heat and humidity. When the stranded men saw Harman’s craft wobble into view they were stunned. Like many people at the time, they had never seen a helicopter before. 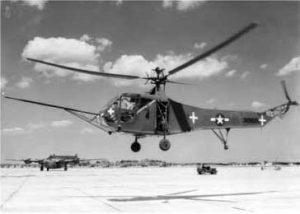 A Sikorsky YR-4B hovers above an airstrip at Langley Air Force base, Hampton, Va., in 1949. 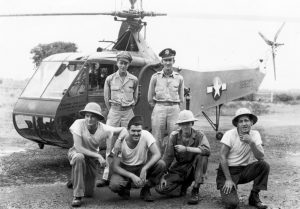 Harman would complete four trips to bring the men to safety. At the end of the second trip, the Hoverfly’s engine overheated and the helicopter went down smoking. Harman waited overnight until the engine cooled, hoping enemy scouts wouldn’t capture the remaining evacuees and that the fragile engine would start up again. With a bit of luck and lot of determination, Harman completed his mission—including setting up a rendezvous point where planes could land and collect the wounded on a sandbar 10 miles away form the downed Soldiers. The rescue took 48 hours. Harman went on to evacuate 18 more Soldiers until the last of the 1st Air Commandos’ helicopters were decommissioned due to lack of supplies. For his efforts he earned the Distinguished Flying Cross. Harman’s air evacuation operation was unprecedented. It was the first medical evacuation by helicopter in enemy territory and marked the beginning of what is now known as Medevac. Only a year later, 2nd Lt. Louis Carle and his team of five pilots rescued over 75 wounded Soldiers from northeast Manila under intense enemy fire. 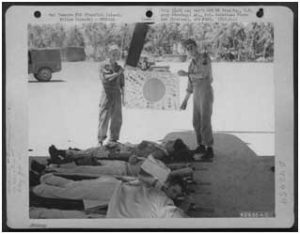 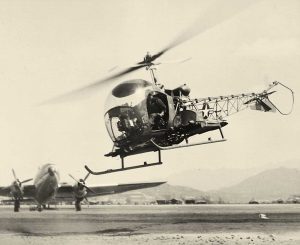 A U.S. Army Bell H-13 carrying two seriously wounded United Nations Soldiers prepares to touch down at a frontline airstrip in Korea in 1952. The Combat Cargo C-54 in the background will airlift them to a medical facility in Japan.

Medevac technology advanced substantially by the beginning of the Korean War six years later, in 1950,  and helicopter evacuation became standard procedure. Some 17,000 Soldiers were medevac’ed from harm’s way during the Korean war, most in cots attached to the side of the aircraft. The Korean War wounded survived their injuries in far greater numbers than in World War II. 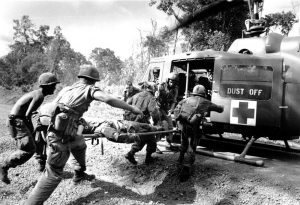 During the Vietnam War, medevac teams relied on the Bell UH-1 helicopter, nicknamed the “Huey.” Spacious enough to transport medical personnel, equipment, and the wounded, Hueys dramatically reduced the delay between injury and treatment. Medical personnel could triage Soldiers the moment the aircraft “dusted off,” in many cases long before they arrived at a field hospital. This marked enhancement in battlefield medical care resulted in a reduction of the mortality rate to one death per 100 casualties. During the Vietnam War, helicopter ambulances moved over 900,000 wounded troops. 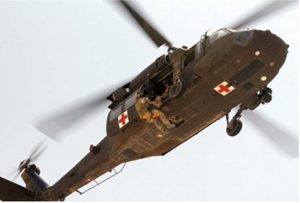 Helicopters continue to play a vital role in military medevac. UH-60 Black Hawk helicopters have been used extensively throughout Iraq and Afghanistan. Both countries feature harsh desert environments that take a toll on aircraft, and Afghanistan’s mountain peaks top out at 18,000 feet, further complicating rescue missions. Air evacuations across such vast and rugged terrain typically extend beyond the so-called “golden hour,” the crucial 60-minute window a severely injured person has to reach a hospital before their survival chances plummet. Black Hawks are large enough to accommodate several medical personnel and advanced field equipment—enabling trauma care to begin the moment the helicopter is in the air, a technique that has saved countless lives.