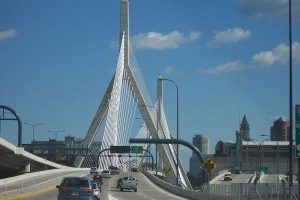 The U.S. interstate highway system traverses 46,747 miles in every state except Alaska. As of the system’s 50th anniversary in 1996, it accounted for nearly a quarter of all road traffic in the country despite accounting for only 1.1% of the nation’s total road surface. It also tallies nearly one trillion person-miles (a person-mile is one mile traveled for each person inside a vehicle) driven. 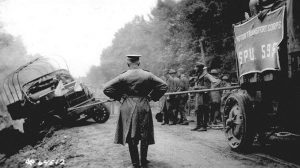 Wreck in Nebraska during the 1919 Motor Transport Corps Convoy.

On July 7, 1919, 79 Army vehicles departed Washington bound for San Francisco along the Lincoln Highway, a 3,389-mile road that was one of the nation’s first transcontinental automobile routes. Called the Motor Transport Corps Convoy, the group included nearly 300 Soldiers and War Department (the precursor to the modern U.S. Department of Defense) observers, among them Lt. Col. Dwight D. Eisenhower, who would play a vital role in the development of America’s highways. Their mission was to test the usefulness of existing roads in case of national emergency. Much of the Lincoln Highway consisted of dirt and gravel tracks—in some locations the “pavement” was little more than loose sand. Bad weather and steep grades often made the road impassable. Numerous bridges were demolished and rebuilt to allow the heavy vehicles to proceed. By the time the convoy reached the San Francisco Bay, the trip had taken 62 days with an average speed of 6.07 mph. The duration of the journey, the poor condition of the route, and the countless mechanical incidents endured along the way proved the nation’s cross-country roads were in extremely poor condition. 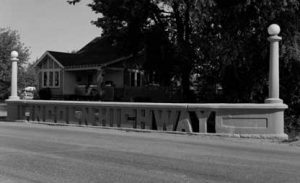 Constructed in 1914, the Lincoln Highway Bridge in Tama County, Iowa is listed on the National Register of Historic Places. 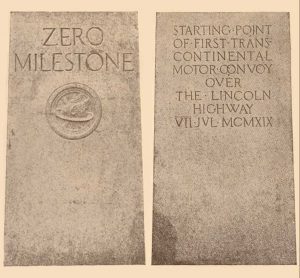 America’s first road surveys are memorialized on the Zero Milestone, a mile marker near the White House indicating the point from which all distances from the Capitol should be measured. A temporary marker was erected in 1919, the very day the Motor Transport Corps left Washington; Congress authorized the Secretary of War to install a permanent pillar a year later. Funding for the interstate road system would not arrive for 36 more years.

Additional road surveys further demonstrated the need for a federally maintained highway network that would support national defense and interstate commerce. In 1922, Gen. John Pershing and his staff compiled a list of 200,000 miles of interconnected public roads the Army felt were essential for national defense. The Pershing Map provided an early model for countrywide, connected highways, surface roads, and feeder routes. Many of the routes indicated on the map would be familiar to interstate travelers today. 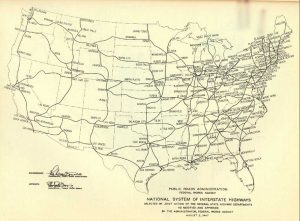 A 1947 Public Roads Administration map of the National System of Interstate Highways. Senators and Representatives used maps like these to see where the proposed routes crossed their districts, in the hopes of winning political and financial support for their construction.

Despite pressure from the Army, the War Department, and some in Congress, support for such a costly public works project remained low. Desire for an interstate highway system stalled completely during the Great Depression and the World War II. Almost 20 years after the creation of the Pershing Map, President Franklin D. Roosevelt established the National Interregional Highway Committee to investigate the viability of an interstate road network. Its 1944 report refined Pershing’s concept and emphasized transcontinental, long-haul roads. But it wasn’t until the post-World War II era—when the automobile and the open road became fixtures of the middle class and symbols of the American dream—that a plan for what would become the Interstate and Defense Highway System (IDHS) was drafted. When President Eisenhower signed the Federal Highway Act of 1956 into law, authorizing 41,000 miles of interstate highways, it was as much on behalf of an eager motoring public as the Army. The first mile of asphalt was laid the very same year, and construction of the entire system was to be completed in two decades. This projection was optimistic; the network was not considered finished until 1991. 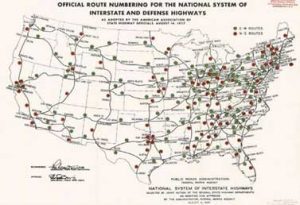 The finalized route and roadway numbering plan, approved and adopted on August 14, 1957. 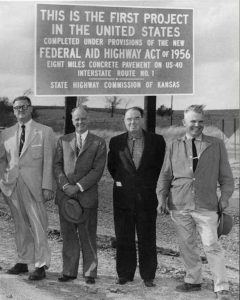 Groundbreaking ceremony for the first official stretch of interstate highway on August 31, 1956, outside of Topeka, Kansas. This “first” is disputed by other municipalities.

Road builders, supervised by the Army Corps of Engineers and many private contractors, worked in multiple locations at once, and they linked the main routes, known unofficially as superhighways, as they finished them. Superhighways are the flagship roads of the IDHS, where autos travel long distances between entry and exit. These limited access roads (few ramps exist outside of urban areas) are free of traffic signals, intersections and sharp curves to allow high speeds. Large medians, shoulders and other safety features help protect vehicles if they suddenly leave the pavement, and all crossings are grade-separated; that is, they pass either above or below the roadway, never across. 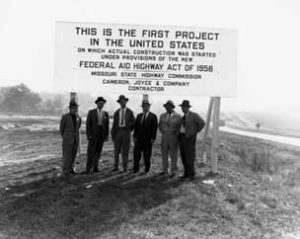 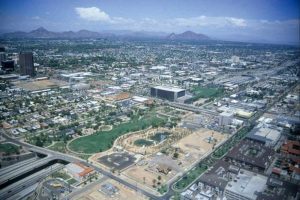 Even as excitement for the interstates grew, criticism was strong in areas where new roads erased the old, often wiping out entire towns along with them. In some instances local governments clashed with federal authorities seeking to use eminent domain to create new rights of way that would permanently alter or destroy neighborhoods. The Papago Freeway through Phoenix, Arizona is a modern example of how local opposition forced major changes to a nationally funded roadway. Federal contractors proposed a cluster of elevated roads passing directly through the city center, accessed by eight-story high arcing entrance and exit ramps that would have cast a literal shadow over the newly bisected downtown. After fierce debate, contractors overhauled the design, and they constructed this stretch of Interstate 10 as a depressed highway, tucked below the landscape and hidden by pedestrian bridges and a stretch of parkland that united the halves of the neighborhood separated by the road cut. 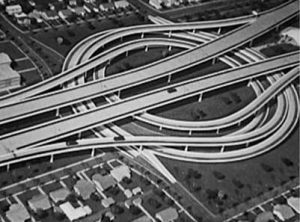 A model of the original Papago Highway design, featuring the 80-foot tall “helicoil” interchange, circa 1960.

The interstate roadways undergo constant analysis in the best interest of defense, commerce and public use. While the National Interstate and Defense Highway System has become a vital public resource and a key turning point in American culture, it remains a focus of the Department of Defense’s Strategic Highway Network, a 140,000 mile-wide-web of government-designated highways and roads connecting military installations, economic hubs, railroads and ports. 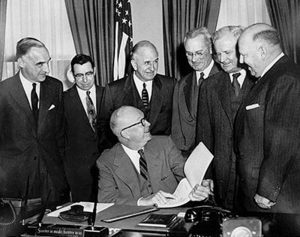 In 1990, the IDHS was officially renamed the Dwight David Eisenhower National System of Interstate and Defense Highways in honor of the man who signed the 1956 funding act and who, as an Army Soldier, participated in the first transcontinental motor convoy. 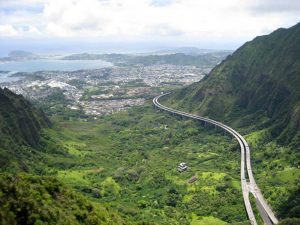 For the soldier and the Citizen

Today, what is often referred to as the greatest public works project in American history is overseen by the United States Department of Transportation Federal Highway Administration, in partnership with local and state transportation agencies. The Army remains a crucial player. The Transportation Engineering Agency (TEA), a division of the Army’s Military Surface Deployment and Distribution Command, continually assesses highways to determine if they meet the needs of the Department of Defense, and coordinates with public agencies to establish policy regarding military use of public roads. One of the system’s signature architectural wonders, Interstate H-3 on Oahu opened on December 12, 1997 in an effort to connect military personnel stationed across the island. The road links the Naval Base at Pearl Harbor to the Marine Corps Base on Oahu’s northeast coast. The soaring roadway and mile-long Tetsuo Harano tunnels curve over jungle and snake under rock, an engineering feat that demonstrates Army innovation for the good of the Soldier and the citizen.