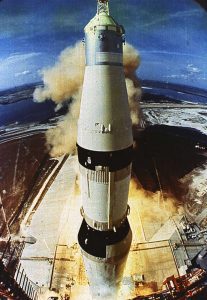 You might be surprised to learn that although NASA (National Aeronautics and Space Administration)  earned much acclaim for sending the first humans to the moon, it was the U.S. Army that developed most of the assets, technology, and research used to build the Saturn V rocket. Indeed, the Army Space Program was indispensable to virtually all of NASA’s early successes. The public space agency assimilated all of the Army’s space resources—including materials, facilities and staff—when President Dwight D. Eisenhower established NASA in 1958 to emphasize civilian and scientific, rather than military, interests in space flight. 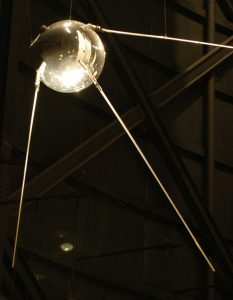 A Sputnik replica. The Soviets claimed the first victory in the Cold War-era space race with the 183-pound Sputnik, the first human-made object to sustain Earth orbit.

The U.S. space program’s roots can be traced to Operation Paperclip, when American officials brought German rocketry and telemetry specialists to the U.S. at the end of World War II. The Army Space Program and the Army Ballistic Missile Agency (ABMA) were founded to conduct research and development on very high altitude, intercontinental and space-based military applications. Headquartered at Redstone Arsenal in Huntsville, Ala., the Army established these agencies to compete directly with Soviet ballistic missile research. When the Soviet Sputnik 1—sputnik is Russian for satellite—achieved low-Earth orbit on October 4, 1957, U.S. scientists were unprepared. The Army Space Program redoubled its efforts to achieve this new, extra-atmospheric high ground. 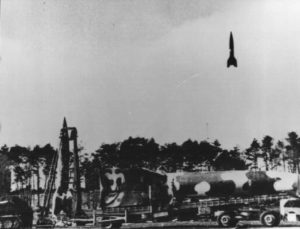 German rocketry site circa 1943. A first-generation V-2 launches in the background. The Germans had camouflaged the rocket bodies to avoid Allied reconnaissance.

As director of the Development Operations Division of the ABMA, German space architect and Operation Paperclip new hire Dr. Wernher von Braun headed up the design of the multi-stage rocket technology that would ultimately become the Saturn V. Von Braun recognized multi-stage rockets were key to transporting any payload reliably into the upper atmosphere and beyond. He was the father of the German V-2 rocket, the blueprint for all modern rocketry, and relied heavily on his experience with German rocket development once he arrived at Redstone. Of von Braun’s contributions to the space program and the extraordinary importance of the V-2 to U.S. Army space flight, ABMA Commander Maj. Gen. John B. Medaris remarked, “If rockets had biblical names, the V-2 would be Adam”. 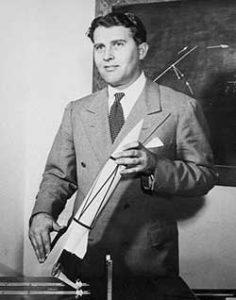 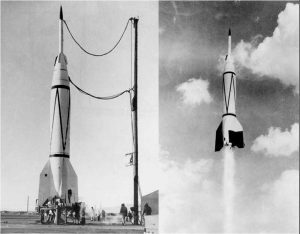 Bumper rocket number 5 launches from White Sands Proving Ground, N.M. on February 24, 1949. It achieved an altitude of 250 miles, a record at the time.

Staged rockets are composed of separate rocket bodies—each with its own engines and fuel supply—stacked in a series and fired sequentially in order to gain speed progressively, escape the Earth’s gravity and maneuver into final orbit. The first stage is the most powerful. It lifts the rocket off the launchpad and almost reaches escape velocity before burning out, falling away, and allowing the secondary stage to ignite. The third and final stage gets the payload to its target altitude.

The Army codenamed its’ first multi-stage rocket Bumper. Bumper was a two-stage model that consisted of an Army Corporal rocket tucked inside a V-2 shell. The Army tested eight Bumper rockets, six at White Sands Proving Ground in N.M. and two at Cape Canaveral, Fla. The first fully loaded Bumper, launched in 1949, achieved the highest velocity and altitude of any humanmade object at that time. The Army’s innovations with the Bumper led to the simply named Redstone rocket, the first true V-2 successor. The initial Redstone model, the PGM-11, became the Army’s workhorse medium-range ballistic missile. Some experimental models could travel more than 3300 miles downrange. 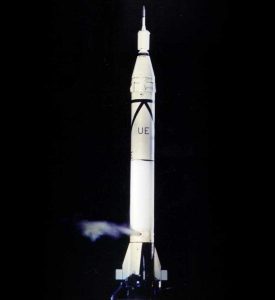 An Explorer satellite atop a Jupiter-Redstone rocket.

Work on Redstone led to advanced variants like the Jupiter-A and C, as well as a 12,000-pound Jupiter-class booster rocket built exclusively for space research, rather than missile use. It was tentatively called Juno. Juno’s many claims to fame include the launching of America’s first satellite, Explorer I, on January 31, 1958. NASA also used Juno to launch Pioneer IV, which brushed past the moon in March 1959 before entering permanent solar orbit. In that same year, a Juno II rocket carried Explorer VII—a satellite packed with advanced instruments for monitoring micro-meteors and solar radiation. It transmitted data continuously for two years.

In 1958, the Army’s Project Adam planned to launch a man just below low earth orbit to an altitude of 150 miles aboard a modified Juno rocket before splashing down in the Atlantic Ocean. Some experts likened the plan to a circus sideshow and it was ultimately shelved. After the Army transferred Redstone and Juno/Jupiter assets to NASA, however, Project Adam morphed into Project Mercury and made history after successfully launching the first Americans into space. 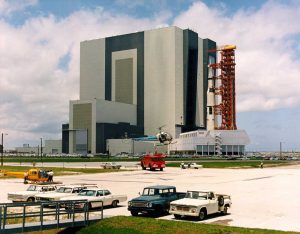 A Saturn V rocket emerges from the massive Vehicle Assembly Building at Kennedy Space Center, still the largest single-story structure in the world.

After numerous modifications and upgrades, Juno II became Juno V, a colossal multi-stage “Super-Jupiter” rocket that the Army designed but never produced due to the shift of space responsibilities to NASA. Between 1958 and 1961, NASA inherited virtually all of the Army’s space research, including the ballistic missile program, facilities at Redstone Arsenal, the Redstone rockets, the Explorer satellite program, and even space race mastermind Werner von Braun himself. His entire staff followed. Some 6500 people departed the Army Ballistic Missile Program for von Braun’s civilian spaceflight operation at NASA. The Juno rocket also followed von Braun. In 1960 NASA renamed it Saturn. 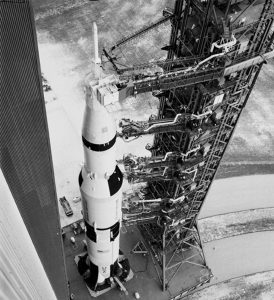 Work on the renamed Super-Jupiter moved forward at NASA, and in 1962 von Braun, now director of the newly established Marshall Space Flight Center in Huntsville, Ala., unveiled the Saturn V. Saturn V launched the first crewed lunar orbiter on December 21, 1968, and eventually astronauts Neil Armstrong and Buzz Aldrin making their landmark moon landing on July 16, 1969. NASA’s Saturn V—carried to the stars by the Army’s quarter-century of space research—ultimately transported 24 men to the moon and launched Skylab, America’s first space station, before being retired in 1973. 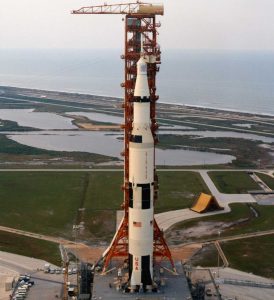 With the Apollo spacecraft fitted to its nose, NASA’s Saturn V tops out at 363 feet, nearly 60 feet taller than the Statue of Liberty’s torch. Fully fueled, the primary booster, second and third stage rockets weigh a whopping 3250 tons, or 6.5 million pounds. When it was towed from hangar to launchpad it crushed the road that was specially designed to support its weight. The Saturn V remains the tallest, heaviest and most powerful space vehicle ever launched, by any country anywhere on the planet. 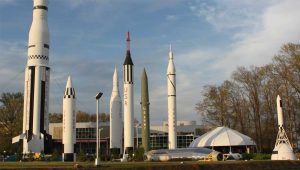 The rocket park at the U.S. Space and Rocket Center in Huntsville, Ala., is a testament to the Army’s early years in rocket development. Since 1965, the space museum has showcased advancements in both space and defense hardware and technologies.

Although the Army ultimately dismantled the ABMA, the Army’s Ballistic Missile Program retained responsibility over projects complementary to space exploration, such as satellite communications and missile defense, in 1962, the Army folded it into the U.S. Army Missile Command (MICOM). In 1997, MICOM merged into the Army Aviation and Missile Life Cycle Management Command (AMCOM), which operates today on property next door to the Marshall Space Flight Center. The nearby U.S. Space and Rocket Center Museum showcases Werner von Braun’s masterpiece Saturn V along with other artifacts of NASA and Army space innovation.