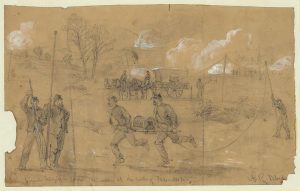 A sketch depicting Signal Corps telegraph train installation at the Battle of Fredericksburg, Virginia circa December 1862.

Rain, sun, wind, and storms hold sway over important aspects of human and animal life, influencing everything from agricultural cycles and migration patterns to commonplace daily decision-making. For most of history, weather observation was impeded by the lack of adequate technology. In particular, before the advent of the telegraph, rigorous weather analysis was impossible. Only when weather observations could be communicated over distance and their patterns recorded, could storms be tracked more effectively. The Military Weather Service, a meteorological division of the Army Signal Corps more commonly called the Weather Bureau, helped establish the science of meteorology and launch the comprehensive weather services we enjoy today. 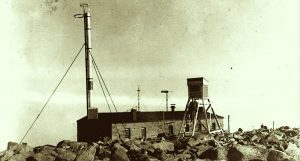 A Signal Corps weather station atop Pike’s Peak in the Rocky Mountains of Colorado, at an altitude of 14,147 feet.

Army contributions to weather analysis began as early as 1814. In order to prevent outbreaks of diseases like yellow fever and malaria, physician and Surgeon General of the United States Army Dr. James Tilton required his staff to keep detailed records to understand the correlation between disease patterns and weather conditions. Thus, it was the Army Medical Department that formalized the routine collection and cataloging of weather data. 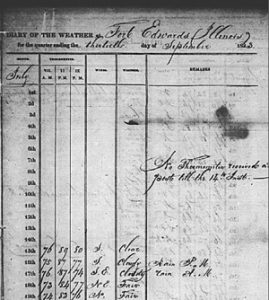 A September 1823 weather observation log from Fort Edwards, a Mississippi River post near the town of Warsaw in present-day Hancock County, Illinois. 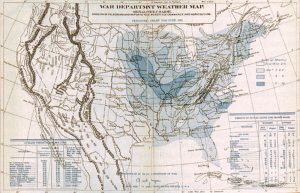 An 1875 War Department weather map documenting precipitation over the Midwest and Eastern Seaboard.

In 1870, a series of freak storms killed several people in the Great Lakes region. These devastating weather events prompted Congress to pass a resolution instructing military posts throughout the continental United States to communicate observations of approaching storms to the Division of Telegrams and Reports for the Benefit of Commerce. Rep  Halbert Paine of Wisconsin, wrote in the resolution that the Army should execute the law because “military discipline would probably secure the greatest promptness, regularity, and accuracy in the required observations.” 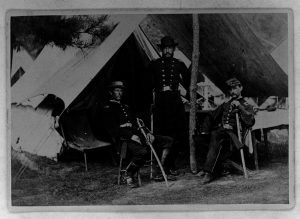 That same year, the Army Signal Corps was tasked with the creation of an effective weather service. The Secretary of War, the precursor to the modern Secretary of Defense, assigned Brig. Gen. Albert J. Myer to the newly created post of Chief Signal Officer. Before serving in the Civil War as a surgeon, Myer had worked as a telegraph operator in New York state. Under Myer’s care, the Signal Corps’ forecasting system grew in scope and effectiveness. Operating primarily as an aid to industrial agriculture, the Signal Corps issued daily weather summaries and predictions, and telegraphed these reports to and from agricultural centers across the country. Furthermore, because only very basic meteorology was taught at universities, the Army instituted its own educational program at Fort Whipple, Virginia. 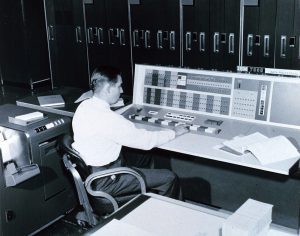 A meteorologist at the console of an IBM 7090 electronic computer in the Joint Numerical Weather Prediction Unit, circa 1960. The 7090 processed weather data for short and long-range forecasts and research.

By the 1880s, the Signal Corps was consumed almost completely by its weather duties and had little time to spare for military endeavors. In 1890, Congress transferred oversight of the Weather Service to the Department of Agriculture where it was renamed the United States Weather Bureau, the predecessor to the National Weather Service. Army involvement in watching the weather for the nation was at an end, but it had been crucial in developing the basis for modern, reliable, nationwide weather observation and reporting.

Charles Patrick Daly, a prominent 19th century jurist, author, New York State Assembly member, and President of the American Geographical Society, wrote, “Nothing in the nature of the scientific investigation by the national government has proved so acceptable to the people, or has been productive in so short a time of such important results, as the establishment of the Signal Service (Weather) Bureau.”