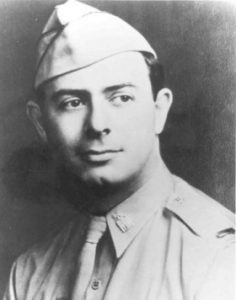 This scripture captures Rabbi Alexander Goode’s mission for interfaith work. He carried out this mission as a chaplain during World War II. Today, Goode and the three chaplains of different faiths whom he served alongside are remembered for their interfaith cooperation. Together, they paid the ultimate price to help save servicemen and civilians during the sinking of the USAT Dorchester on February 3, 1943.

Alexander David Goode was born on May 10, 1911, in Brooklyn, New York. From a young age, he demonstrated the courage that later defined his service as an Army chaplain. While still a child, Goode saved his family home from burning down when he and his three younger siblings were home alone. At the time, Goode was cooking in the kitchen when the curtains caught fire. He yelled for his siblings to leave the house while he grabbed a wet blanket to extinguish the flames before the firemen arrived.

Though born in Brooklyn, Goode grew up in Washington, D.C. In D.C., he attended Eastern High School where he excelled academically and athletically. He also served in the National Guard over the summer months. During high school, Goode met the love of his life, Theresa, whom he married in 1935. After high school, He decided to follow in his father’s footsteps by becoming a rabbi. He received rabbinical ordination from Hebrew Union College in 1937.

After graduation, Goode pursued his passion for interfaith cooperation while expanding his education and starting a family. He secured a position at the Temple Beth Israel in York, Pennsylvania, in 1937. In York, Goode gave public lectures on Jewish history and participated in interfaith services. At the same time, he became a father in 1939 to daughter Rosalie. In 1940, he earned his PhD in Middle Eastern languages from John Hopkins University.

As the 1930s progressed, Goode grew increasingly worried about the persecution faced by European Jews during Adolf Hitler’s rise to power. In January 1941, he applied for a chaplaincy in the Navy but was turned down. Then, on December 7, 1941, Goode’s world shattered with the bombing of Pearl Harbor. After Pearl Harbor, he joined the Army Air Forces as a chaplain. In August 1942, the Army stationed Goode at Seymour Johnson Field (now Seymour Johnson Air Force Base) in Goldsboro, North Carolina. Goode, however, wanted to serve on the front lines. After active lobbying on his part, the Army transferred him to Camp Myles Standish in Taunton, Massachusetts, in November 1942. There he prepared to deploy overseas. Goode’s destination was Greenland, the site of U.S. military airbases.

To make it to Greenland, Goode, along with approximately 900 Soldiers, civilians, and crewmen, sailed on the USAT Dorchester. Built in 1926, the Dorchester operated as a luxury cruise liner before the Army converted it to a troop transport ship in March 1942. Despite its age, the Dorchester had already completed five voyages across the North Atlantic Ocean unharmed. On January 23, 1943, the Dorchester set sail from New York on another voyage as a part of a 64-ship convoy.

Goode’s time on the Dorchester allowed him to put his interfaith teachings into practice. Three chaplains of different denominations joined Goode on the Dorchester: Rev. Clark Poling of the Dutch Reformed Church, Father John Washington, a Catholic priest, and Rev. George Fox, a Methodist minister. The four chaplains were popular figures aboard the ship. They talked with the Soldiers, held religious services, and planned a talent show. As they ministered together, the chaplains shared an easy friendship that was unusual for the time. One serviceman aboard the Dorchester recalled, “to see these men in the same uniform but of different faiths getting together and actually talking and laughing and smiling and joking with each other was unheard of.”

Prior to entering the most dangerous phase of the journey, the Dorchester stopped to refuel at St. John’s, Newfoundland. On January 29, 1943, the Dorchester left St. John’s as a part of a much smaller convoy, SG-19. The convoy included the freighters Biscaya and Lutz and three U.S. Coast Guard cutters, the Tampa, Escanaba, and Comanche. The six ships headed straight into Torpedo Junction; a section of the North Atlantic known for German U-boat attacks. The convoy’s smaller size and slow speed, its lack of air protection, and the Escanaba’s limited sonar range all added to Torpedo Junction’s danger.

After leaving St. John’s, the Dorchester faced the twin threats of a U-boat attack and a significant winter storm. In fact, the storm was the largest in the North Atlantic in over 50 years. During the storm, those aboard the Dorchester suffered through heaving waves and subsequent seasickness. Goode and the other chaplains provided comfort and support to the ship’s nauseated passengers. The storm subsided, but the U-boat threat persisted. On February 2, the Tampa informed the Dorchester that it had spotted submarines in the vicinity. Yet, if the Dorchester made it through the night, the ship would be close enough to Greenland to have air protection.

Unfortunately, most of those aboard the Dorchester would not live to see Greenland, including Goode. On February 3, at around 12:55 a.m., the German submarine U-223 fired three torpedoes at the Dorchester. One torpedo hit its mark, tearing through the ship near the engine room. Upon being hit, the Dorchester went dark. Around a third of the civilians and servicemen on the ship died shortly after the projectile struck. Those who managed to make it topside encountered confusion. Many Soldiers slept without wearing their clothes, gloves, or life jackets. Because of the ship’s heavy list toward starboard, several of the lifeboats were inaccessible. Others had ropes coated in a thick layer of ice, making them difficult to move.

Goode’s actions during this chaos, along with those of the other three chaplains, served as a model of interfaith cooperation and brotherhood. They passed out extra life jackets, offered comfort, and coaxed fearful men overboard in an effort to save their lives. Navy Lt. John Mahoney was a direct recipient of Goode’s assistance. Goode lent Mahoney his gloves to prevent him from going back to his cabin to retrieve the ones he had left behind. Mahoney credits Goode’s generosity with his survival. Each of the chaplains also gave up his life jacket to men who did not have one, regardless of their faith. By doing so, they sacrificed their lives so that others might live. To the end, Goode and his fellow chaplains demonstrated their strong bond for each other, despite their religious differences. Several survivors reported seeing the four chaplains huddled together in prayer as the ship made its final plunge into the ocean. The Dorchester sank less than 30 minutes after being torpedoed. Only 230 of the approximately 900 troops and civilians on board survived.

Despite Goode’s death at the age of 31, both his wife and daughter upheld his legacy of goodwill toward others. In 2000, Theresa welcomed two members of the U-223 crew and their wives into her home, providing a tangible example of Goode’s beliefs in action. Before her own tragic death in a car accident in 1999, Rosalie Goode Fried kept her father’s memory alive by continuing to tell his story. In 1997, she joined with David Fox, Chaplain Fox’s nephew, to form the Immortal Chaplains Foundation, an organization dedicated to carrying on the four chaplains’ interfaith work. An article written after her death states Goode Fried “spent much of her life keeping alive the memory of a man she never really knew—her father.”

After the Dorchester tragedy, the story of the four chaplains’ courage spread. Even in death, Goode and his fellow chaplains are remembered for their sacrifice and interfaith model. In 1944, the U.S. Army posthumously awarded the Purple Heart and the Distinguished Service Cross to Goode, Fox, Washington, and Poling. In 1948, the United States Postal Service issued a commemorative stamp in honor of the four chaplains. The stamp’s design included the phrases “these immortal chaplains” and “interfaith in action.” On February 3, 1951, President Harry Truman dedicated the Chapel of the Four Chaplains in Philadelphia. Highlighting their interfaith legacy, Truman declared that the four chaplains “obeyed the divine commandment that men should love one another.” In 1961, Congress created a Chaplain’s Medal for Heroism for the four chaplains in place of the Medal of Honor. Goode and his fellow chaplains were not eligible for the Medal of Honor because their heroic actions did not take place during combat. In 1998, Congress designated February 3 as “Four Chaplains Day.” Closer to home, in York, Goode’s memory lives on in the Alexander D. Goode Elementary School, the school’s four chaplains’ mural, and York’s Four Chaplains Prayer Breakfast. These numerous awards, memorials, and commemorations demonstrate how Goode’s legacy of interfaith cooperation continues to be preserved decades after his sacrifice.