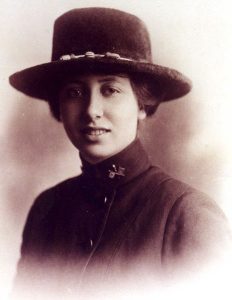 Enid Mack Pooley served in the Signal Corps Telephone Operators Unit, known as the “Hello Girls,” during World War I. Serving with distinction, they operated telephone lines and switchboards at the Western Front, translating messages and coordinating the Allied war effort. The youngest “Hello Girl” to serve, Pooley and her fellow operators were the first women accepted for service in the Army other than as a nurse. Their service paved the way for women’s opportunities in the American military.

Born Enid Adolph Mack to Charles and Isabella Henriette Victoria Mack on May 21, 1899, Pooley started her life as British citizen. Growing up in Washington state, she was fluent in French as her mother was a French citizen. In 1915, she attended the University of Washington as an incoming freshman. While in school, Pooley worked part-time as a relief telephone operator for Puget Sound Power and Light (now Puget Sound Energy).

On April 11, 1918, Pooley joined the Signal Corps with the designation “Operator, Telephone Unit.” Though the age requirement was 23, the Army granted her an exception as she spoke fluent French and German. The Army paid her a wage of $60 per month with allowances for food, clothing, and housing (about $1,075 in 2021). Pooley traveled to San Francisco for training along with other members of her unit. After completing two months of training, the 7th Unit, to which Pooley was assigned, went to New York City for further training. There, the 7th Unit trained at the offices of the American Telephone and Telegraph. While in New York, Pooley purchased her uniform which included a long navy blue dress, a broad brimmed navy blue hat, and Signal Corps lapel insignia.

While Pooley trained in New York, over 200 “Hello Girls” were already in France. After the deployment of the American Expeditionary Forces (AEF) in 1917, Allied leaders grappled with communication problems between Army units and their foreign allies. The language barrier between the Allies created an urgent need for experienced phone operators. General John J. Pershing, commander of the AEF, ordered the recruitment of women telephone operators fluent in English and French. Nicknamed “Hello Girls,” the first telephone operators arrived in Paris in March 1918.

As Pooley and the 7th Unit prepared to deploy to France, World War I ended when the Allied and Central Powers signed an armistice on November 11, 1918. The Army discharged Pooley on December 26, 1918 and she returned to Washington a year later. A British citizen, she applied for naturalization as an American citizen, believing that her Army service granted citizenship. Pooley was surprised to learn that, according to the Army, that she and the other “Hello Girls” were considered civilian employees of the Army. Despite their excellent record of service and their treatment as Soldiers, the Army denied the “Hello Girls” veteran status.

Pooley graduated from Barnard College in 1921 and married Neville Pooley in 1923. She finally became an American citizen in 1925. She settled in Washington and raised three daughters with her husband. Pooley never forgot the Army’s refusal to recognize her as a veteran, believing it a gross injustice. She hired attorneys, wrote Congress, and never gave up hope that she would one day gain veteran status.

In 1977, 59 years after the end of World War I, Congress passed the GI Improvement Bill which granted 233 “Hello Girls” veteran benefits. The Army issued them honorable discharges and granted them veteran status. For many, including Pooley, it was too late. She died of a stroke on August 24, 1977 at the age of 80, four days before the passing of the bill. Pooley’s service, along with that of the other “Hello Girls,” is credited as helping lead to the service of women in the Army in future conflicts.

“They Served: The ‘Hello Girls’ of WWI and their sixty-year battle for recognition.” VAntage Point (blog). March 30, 2020. https://www.blogs.va.gov/VAntage/72875/they-served-the-hello-girls-of-wwi-and-their-sixty-year-battle-for-recognition/.