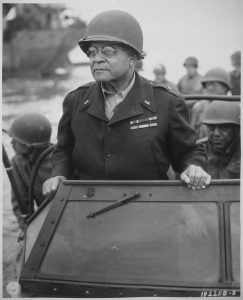 African American Soldiers have served in the American military since the Revolutionary War. Many, like Brig. Gen. Benjamin Davis Sr., pushed against racial boundaries to better the situation of future Black Soldiers. Davis began his Army service in a segregated unit. Still, he strove throughout his career to fight against segregation, becoming the first Black general in the U.S. Army. Davis spent over 40 years in the Army, serving in combat, diplomatic, and administrative roles around the world. His service inspired many Black Soldiers, including his son, to work through the barriers of segregation they faced in the Army.

Benjamin Oliver Davis was born in Washington, D.C. on July 1, 1877, though he likely forged his birthdate to sign up for the Army in 1898. Born to Louis P. H. and Henrietta Davis, whose parents were enslaved, he experienced countless challenges as a Black man in a segregated society. Davis attended M Street High School in Washington, where he first learned about the Army during his time in the cadet program. During his senior year, he attended classes at the historically-Black Howard University but instead chose to enlist in the Army.

Davis first served in the segregated 8th Volunteer Infantry Regiment as a first lieutenant during the last year of the Spanish-American War. His regiment never saw action, and, in 1899, Davis decided to reenlist as a private in the regular Army after his regiment disbanded at the end of the war. He joined the all-Black 9th Cavalry Regiment, nicknamed the Buffalo Soldiers for their service on the frontier during the Indian Wars. Once with the 9th, Davis quickly moved up the ranks, and within a year, he became sergeant major. While stationed with the 9th, Davis met Lt. Charles Young, the only Black officer in the Army at the time. Young taught Davis what he needed to do to become an officer. Within two years of joining the Army, Davis passed the officer’s test, becoming a second lieutenant with Troop F of the 10th Cavalry.

Davis served with the 10th Cavalry for a year in the Philippines. In September 1905, Davis was transferred to Wilberforce University to be a Professor of Military Science and Tactics. Over the next 12 years, Davis served at Wilberforce, went to Liberia as a military attaché, and rejoined the 9th for a time. When World War I began, Army leadership was reluctant to send Black Soldiers overseas to fight. Most Black regiments were either assigned to border patrol or sent to other stations away from the frontlines. During World War I, Davis became a supply officer to the 9th Cavalry stationed in the Philippines. Davis stayed in the Philippines until 1920 and was eventually promoted to captain.

Though he was not able to serve on the front lines during World War I, afterward, Davis continued to fight for advancement and traveled around the country to different positions. After the war, he became a professor of military science and tactics at the Tuskegee Institute in Alabama. Davis spent the next decades serving in various instructor roles with the Ohio National Guard, New York National Guard, Wilberforce University, and the Tuskegee Institute. On October 25, 1940, Davis was promoted to brigadier general, making him the first Black general in the Army.

In January 1941, Davis took command of the 4th Brigade, 2d Cavalry Division at Fort Riley, Kansas, but was reassigned as an assistant in the Office of the Inspector General. Davis spent most of World War II in the Inspector General’s office, serving on the Advisory Committee on Negro Troop Problems. He spent three years on the committee, where he conducted inspection tours of all-Black units in the Army. Twice, Davis went to Europe to inspect the Black regiments stationed there. In 1944 Davis was assigned to Europe as an assistant commanding general for communications and stayed there through the end of the war. While in Europe, Davis played a crucial role in proposing the policy of beginning the racial integration of units with replacement troops. His idea was to begin integrating Army units with replacement Black troops as new troops came to fight overseas. Though it was not widely used, it began the process of showing that troops of different races could serve together in battle.

Davis returned to Washington in 1945 to the Inspector General’s Office. He served there for two years until promoted to special assistant to the secretary of the army. On July 20, 1948, Davis retired after 50 years of service in the Army. Davis’s legacy had a lasting impact on the Army and its integration. His son, Gen. Benjamin O. Davis Jr., followed in his footsteps. Davis Jr. led the Tuskegee Airmen during World War II, played an essential role in integrating the Air Force, and became the second Black general in the Air Force. Davis Sr. died on November 26, 1970, and is buried at Arlington National Cemetery. Despite racism and segregation Davis broke barriers and helped set a new standard for Black Soldiers in the Army.