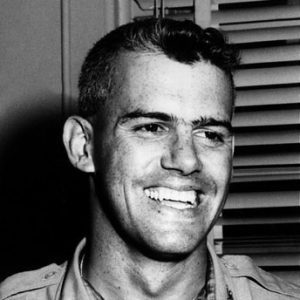 Selfless, brave, and devoted are a few words that describe Capt. Humbert Versace. Capt. Versace was the first Soldier awarded a Medal of Honor for his actions as a prisoner of war during the Vietnam War. An intelligence officer, Versace went above and beyond the call of duty to serve his country and volunteer in helping the local villagers. While in captivity, Versace refused to reveal information and served as a leader for his fellow imprisoned American Soldiers. In his five years with the U.S. Army, Versace embodied the Army Code of Conduct and selfless service.

Humbert Roque “Rocky” Versace was born July 2, 1937 to U.S. Army officer Humbert Joseph Versace and Puerto Rican author Marie Teresa “Tere” Ríos. He grew up in Alexandria and Norfolk, Virginia, often caring for his four younger brothers and sisters while his father was deployed. His mother’s strong Catholic faith formed her son’s life, and he developed a firm sense of duty and devotion, both to his family and friends and his career. Following in his father’s footsteps, Versace attended the U.S. Military Academy at West Point and graduated as a second lieutenant in 1959. He then attended Ranger School and Airborne School. His first assignment was with the 1st Cavalry Division as a M-48 Tank leader in South Korea from 1960 to 1961. Versace was then promoted to captain and assigned to the 3d U.S. Infantry (The Old Guard)—the Army’s official ceremonial unit and escort to the president based at Fort Myer, Virginia (now Joint Base Myer-Henderson Hall).

Versace was at Fort Myer for less than a year when he volunteered for duty in Vietnam. In preparation, he attended intelligence school at Fort Holabird, Maryland, and the Vietnamese Language Course at the Presidio of Monterey, California. Versace began his tour in South Vietnam in May 1962, as an intelligence advisor in Long Khánh. After a few months he moved to the Staff Advisory Branch in the 5th Infantry Division in Biên Hòa.

Versace went beyond the call of military duty and served the local villagers in the town of Cà Mau. He helped mend thatched roofs, arranged wheat deliveries, and wrote to U.S. schools asking for donation soccer balls. Versace felt a calling in Vietnam, especially with the children, and extended his tour for six months. Versace planned to attend seminary to become a Catholic priest and return to Vietnam as a missionary after his Army career. His final assignment was with Advisory Team 70 as an intelligence advisor to the South Vietnamese Civil Defense and Self Defense Forces in the Mekong Delta Region.

Two weeks before the end of his tour and commitment with the Army, Versace was advising the Civilian Irregular Defense Group (CIDG) on a mission to remove a Viet Cong unit in the U Minh Forest. Versace joined the mission on October 29, 1963. The unit came under attack and engaged in heavy combat. Despite his own injuries, Versace protected two injured comrades, 1st Lt. Nick Rowe and Sgt. Dan Pitzer, and provided cover fire to allow the rest of the CIDG to escape. Versace, Rowe, and Pitzer were soon captured by the Viet Cong.

Versace remained a prisoner of war for two years, deprived of food and water and exposed to the heat and mosquitoes of the U Minh Forest. Despite having an untreated leg injury, he attempted escape four times. Crawling on his hands and knees, he was discovered outside of the camp and recaptured each time. Due to these attempted escapes and resistance to torture, the Viet Cong separated Versace from his comrades and bound him in a bamboo cage six feet long, three feet wide, and two feet high. He was let out only for food, to use the bathroom, or for transport to another prison camp. Viewing them as war criminals, the Viet Cong brutally tortured Versace, Rowe, and Pitzer in attempt to have them admit to false war crimes. Versace resisted, telling his captors to “go to hell” in English, Vietnamese, and French.

Versace was a leader to his fellow American Soldiers. He challenged the Viet Cong for not honoring protections guaranteed to prisoners of war by the Geneva Convention, and persevered in only revealing what the Convention permitted: name, rank, service number, and date of birth. Despite inhumane conditions and brutal torture, Versace remained loyal to the Army Code of Conduct, an ethical code outlining how Soldiers should act as prisoners of war. Pitzer, Rowe, and local Vietnamese villagers remembered his strength in the face of torture. The last time Versace was seen by an American, he was singing “God Bless America” from his isolation cage.

Versace’s family received few updates about his captivity, only told that he had been captured. The Army unsuccessfully attempted to rescue Versace on three occasions. After 23 months of captivity, on September 26, 1965, the Viet Cong announced over radio that Capt. Versace had been executed. The Versace family learned of his death shortly afterwards on the evening news. His family was devastated, his father passing away a few years after his son, and his mother continuing to believe until the day she died that he would emerge from the jungle. Versace’s remains were never recovered. He was officially declared dead on July 1, 1966 and posthumously awarded a Purple Heart the next day.

The story of Versace’s strong resistance was not known until after Rowe escaped Viet Cong captivity in 1968. Rowe met with President Richard M. Nixon to tell Versace’s story and nominated him for the Medal of Honor. Versace’s nomination failed, but he was awarded a Silver Star on May 19, 1971. He received many awards both during active duty and after his death, including the Parachutist Badge, Combat Infantry Badge, the Expert Infantryman’s Badge, the POW medal, and the Special Forces tab. Versace’s family and friends, unified through the group “The Friends of Rocky Versace,” continued to advocate for the Medal of Honor. There is speculation that he was initially denied the award due to politics following the Vietnam War, which did not want to focus on the war’s casualties. A second nomination for a Medal of Honor succeeded with the passage of the 2002 National Defense Authorization Act, ordering for Versace to be awarded the Medal of Honor. President George W. Bush presented the award to Versace’s surviving siblings on July 8, 2002.

Versace is the first Army POW awarded a Medal of Honor for actions during captivity in Vietnam. He represents the strong will and loyalty of the U.S. Army through obeying the Geneva Convention and the Army Code of Conduct. Nick Rowe recalled that while in captivity Versace served as an example and inspiration to also resist submission. Versace inspired and helped his fellow American prisoners to survive.