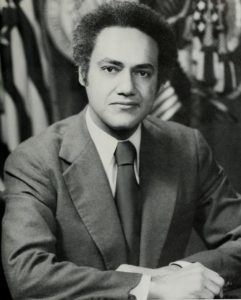 Alexander was born on September 21, 1933 in Harlem, New York City, a predominantly Black neighborhood. He attended private schools where he was often the only Black pupil in class. He excelled in school and went on to attend Harvard University, where he was the first Black president of the student council. Upon graduating in 1955 he enrolled at Yale Law School. After receiving his law degree in 1958, Alexander enlisted as a private in the New York National Guard. He joined the 369th Field Artillery Battalion and was stationed at Fort Dix, New Jersey (now Joint Base McGuire-Dix-Lakehurst) but not activated during his time there. He served for six months before leaving the National Guard to begin work as a lawyer in New York City.

In 1959, Alexander married Adele Logan, a historian and professor. Together, they raised two children, Elizabeth and Mark Clifford Alexander. After completing his time at Fort Dix, Alexander became an assistant district attorney for New York County. He served in this role until 1961 when he began working for community organizations in New York, including the Harlem Youth Opportunities Unlimited. This organization worked to improve educational and employment opportunities for young, Black residents of Harlem. It also promoted education changes for Black communities.

Alexander’s career soon brought him to Washington, D.C. as a foreign affairs officer on the National Security Council in 1963, which marked his entry into Washington politics. Beginning his work under President Kennedy, Alexander continued as an advisor for President Johnson from 1964 until 1967. Alexander’s skills and experience led to his appointment as the chairman of the U.S. Equal Employment Opportunity Commission (EEOC). There he investigated the hiring practices of American businesses. He continued in this role until resigning the position under President Nixon.

After resigning from the EEOC, he took up a position as a partner at a Washington, D.C. law firm, though Alexander soon returned to Washington’s political sphere. On February 14, 1977 President Carter appointed Alexander as the secretary of the Army, the 13th in U.S. history. His appointment marked the first time a Black man served in this role. Not only was Alexander now responsible for administering the $28.8 billion budget, he also oversaw the day-to-day affairs of the Army and coordinated the civilian and military components. He encouraged the development and implementation of programs that enhanced professionalism and promoted the awarding of Army contracts to minority businesses.

When Alexander took up the position, the U.S. was recovering from the Vietnam War and had only recently transitioned to become an all-volunteer Armed Forces (AVF). The U.S. Army moved away from a draft system of Army recruitment, which had been used in most prior conflicts including World War II, Korea, and Vietnam, to a voluntary system in 1973. In previous years the Army had relied on a conscription model of Soldier recruitment to increase their forces, beginning with the Revolutionary War and continuing through America’s major conflicts. Yet there were concerns that a voluntary based service would be both too costly and bring in lower quality Soldiers. However, Alexander believed this was not the case.

At the time, 22.2% of Army volunteer recruits were Black while only 11% of the U.S. population as a whole was Black. While some criticized the AVF program as bringing in a disproportionately high percentage of Black Soldiers, Alexander disagreed with their criticism. He said that “We, just as whites, are patriotic and so we volunteer… This has been a part of our history. During the Second World War, our people begged to be put into combat units.” For Alexander, African American enlistment in the Army was also led by “job discrimination in the private sector and the lack of adequate training for the job market.” Ultimately, the Army’s goal for establishing an all-volunteer armed force was to ensure a high-quality force of Soldiers. To Army leaders “the consensus [was] that it’s a better army than has been out there before.”

Some believed that the draft brought in a representative number of Americans across all races and socio-economic classes. However, Alexander argued that “the theory of a draft somehow cutting across all class and race lines in a society, and therefore being more equitable than a volunteer army, would not hold water… The draft always hit harder on poor people, and therefore it was not equitable.” As debates about an all-volunteer Army continued, some made arguments that those who volunteered were doing so for the wrong reasons, such as escaping bad home situations, poor neighborhoods, or just only for financial gain. Alexander observed that “young men and women… come to appreciate the significance of the service they are providing their country. They work hard—often on lonely, sometimes foreign fields. They take their training and their missions seriously. They are well motivated and should take pride in what they are doing for their country and for themselves.”

When Alexander left his position as the secretary of the Army in 1981, he had overseen the transition to an all-volunteer Army force, promoted the role of women and minorities in service, and encouraged diversity in the U.S. Army. He worked to ensure that women were treated equally and judged and promoted based on their skills and accomplishments rather than their gender. That same year, Alexander formed Alexander and Associates, a consulting firm focused on workplace inclusivity. He continues to serve on the boards of several corporations and is a member of the Board of Governors of the American Stock Exchange. His dedication to addressing issues with the treatment of minorities and women in the Army marked a step forward for the U.S. His actions, including promoting 30 Black Soldiers to the rank of general, coupled with his role as the first African American to hold the position of secretary of the Army, laid the groundwork for the advancement of people of color not only in the Army, but the U.S. as a whole.

Bell, William Gardner. “Secretaries of War and Secretaries of the Army.” U.S. Army Center of Military History. May 22, 2001. https://history.army.mil/books/sw-sa/alexander.htm.