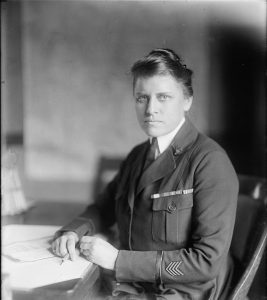 Though she faced many medical challenges of her own, Col. Julia C. Stimson committed her life to healing others. Stimson’s passion for medicine led her to nursing. Her commitment drove her to become the fifth superintendent of the Army Nurse Corps. Her dedication and hard work cemented nursing as a viable profession for women in the Army.

Julia Catherine Stimson was born into a well-known New England family on May 26, 1881. Her uncle, Dr. Lewis Stimson, helped found Cornell University Medical College (now Weill Cornell Medicine). Her father, Dr. Rev. Henry A. Stimson, was the local minister of Worcester, Massachusetts. He enrolled both of his daughters in a “fancy girls’ school” and insisted they learn Greek. He believed his sons and daughters should receive an equal education. In 1901, at the age of 16, Stimson attended Vassar College in Poughkeepsie, New York. Inspired by this education and her own experiences with medical professionals, Stimson wanted to be a physician. At a young age, she developed a skin condition that caused her to be in and out of the hospital her entire life. In 1903, while receiving treatment at New York Hospital (now New York-Presbyterian Hospital), she met Annie Goodrich, the superintendent of nurses. Meeting Goodrich convinced Stimson to begin her nurse training there, despite her family’s concerns about her going into the male-dominated field of medicine.

Traditionally, nursing was a woman’s unofficial job; if family members fell ill, women stepped in to care for them. Men served as community physicians, assisting if a family member’s condition worsened. During the Revolutionary and Civil Wars, women volunteered as untrained nurses. In the late 19th century, the efforts of women such as Florence Nightingale and Clara Barton inspired the creation of professional nursing schools and consistent nursing education. The first nurse training school opened at the New England Hospital for Women and Children (now The Dimock Center) in 1872. By 1900, hundreds of nursing schools existed in the United States. Besides taking classes, nursing students took care of patients, did chores, and assisted in daily hospital maintenance. During the War with Spain, efforts to professionalize the American nursing field intensified. Dr. Anita Newcomb McGee, who is credited as the founder of the Army Nurse Corps, pushed to allow only trained nurses to serve as civilian contract nurses for the U.S. Army. After the war, McGee wrote the legislation which established the Army Nurse Corps on February 2, 1901.

After her graduation in 1908, Stimson struggled for three years to find a job that would be appropriately challenging and acceptable to her family. She accepted her first job at the Harlem Hospital as the supervisor of nurses. During her three-year stay at Harlem, Stimson not only handled a challenging workload but also assisted in opening a medical social service that focused on patients’ mental and emotional wellbeing during their stay in the hospital as well as their physical wellbeing. Her career then brought her to St. Louis where she began her Master’s Degree in sociology at Washington University. While attending school, she continued to work at the Training School for Nurses at Barnes Hospital (now Barnes-Jewish Hospital) and the St. Louis Children’s Hospital. She became the supervisor of nurses at both hospitals. Stimson’s time in St. Louis allowed her to show her abilities as a leader as well as develop her political and social work skills which helped her later in her career.

When the United States entered World War I, Stimson enlisted as a nurse on May 19, 1917. The Army was desperate for nurses so Stimson worked to enlist nurses into the Army Nurse Corps for service in France. Stimson was stationed at Base #21 Hospital in Roam, France where she was the chief nurse in charge of around 55 nurses. Proud of her work on the frontlines, she wrote to her parents,

“Aside from what we think about the causes and principles involved, and the tremendous satisfaction of having a chance to help work them out, to be in the front ranks in this most dramatic event that ever was staged, and to be in the first group of women ever called out for duty with the United States Army, and in the first part of the army ever sent off on an expeditionary affair of this sort, is all too much good fortune for any one person like me.”

World War I was the first time the Army Nurse Corps served in a war. After leading Base #21 for 11 months, Stimson left the Army briefly and became the chief nurse of the American Red Cross in France on April 18, 1918. This role required Stimson to supervise the 10,000 American Red Cross nurses stationed in France. Six months later, Stimson returned to the Army as the director of the Nursing Service for the American Expeditionary Forces. In this role, Stimson led around 10,000 Army nurses in France. Her work earned her the Distinguished Service Medal and the Red Cross Florence Nightingale Medal. General John J. Pershing cited that her awards were for “exceptionally meritorious and conspicuous service.”

Upon returning to the United States in 1919, Stimson’s work was broadly recognized. In 1920, the Defense Act was amended to reorganize the Army in preparation for possible future wars. Because of this reorganization, Stimson was awarded the relative rank of major, which made her the first and only woman of the time to hold the rank. She remained with the Army, where she was promoted to the dean of the Army School of Nursing and the acting superintendent of the Army Nurse Corps. She used these positions to continue serving as an advocate for nurses everywhere. Stimson held these positions for almost 20 years until her retirement in 1937. During this time, she also traveled around the globe advocating for the professionalization of nurses by serving as the United States delegate to the International Red Cross and traveling to Cannes, France for conferences.

After Stimson’s retirement, her decades of service caught up to her. Tired from stress and grieving the recent loss of family members, she decided to move closer to her mother in New York. She did not leave her life of public service, however. She served as president of the Army Nurse Association from 1938 to 1944 as well as a member of the Nursing Council on National Defense. With the increased need for professional nurses to serve in World War II, Stimson returned to active duty to assist in appointing nurses. She was promoted to the rank of colonel in August 1948. Only six weeks after her promotion, Stimson died due to complications from abdominal surgery. She was 67 years of age. Her family spread her ashes in a river flowing through her property in Briarcliff, New York In 1976, in honor of her impact on nursing, the Army Nurse Association inducted Col. Julia Catherine Stimson into their Bicentennial Hall of Fame.

Kennedy, Holly Powell and Linda Spoonster Schwartz. “A Salute to Dean Annie W. Goodrich on the 100th Anniversary of the end of World War I.” Yale School of Nursing. July 26, 2018. https://nursing.yale.edu/news/salute-dean-annie-w-goodrich-100th-anniversary-end-world-war-i