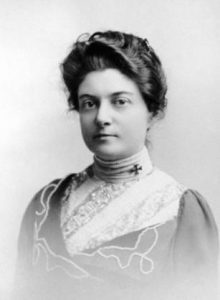 When the War with Spain broke out in 1898, the idea of nursing as a respectable profession for women was still new. Dr. Anita Newcomb McGee noticed this and worked to forge the professional nursing field. Thanks to her efforts, McGee established the Army Nurse Corps and secured roles for women in the Army for years to come.

Anita Newcomb was born on November 4, 1864, to Simon and Mary Newcomb in Washington, D.C. Her father was a renowned astronomer and her mother was a respected intellectual and the granddaughter of Ferdinand Rudolph Hassler, the first superintendent and founder of what is now the U.S. National Geodetic Survey. McGee’s parents both stressed the importance of education to their children at a young age. Her mother particularly stressed the importance of a broad education. McGee studied at elite private schools in Washington, D.C. while also receiving classes at home. She focused on history and genealogy. As a young adult, she visited Newham College in Cambridge, England, and the University of Geneva, Switzerland where she took specialized courses.

On Valentine’s Day 1888, Anita married Dr. William John McGee. He was the geologist-in-charge of the Atlantic Coastal Plain Division of the U.S. Geological Survey. Shortly after they married, he encouraged her to continue her education in medical school. She graduated from Colombian University (now George Washington University) in 1892 with a Doctorate in Medicine. While at Columbian, the McGees had their first child, Kothko. A private nurse helped raise Kothko while McGee continued her studies. She went on to John Hopkins University to study gynecology. She also interned at the Women’s Clinic in D.C. After completing her degree, McGee opened her own medical practice before taking a step back from medicine in 1895.

While in medical school, McGee got involved in political organizations. When male students tried to intimidate female students from the school, Columbian attempted to end their coeducation policy during McGee’s senior year. They appealed to school pride, saying that Georgetown University would surpass Columbian if they continued their unprogressive policies. While this appeal was unsuccessful, McGee finished her final year at Colombian and proved herself as a political organizer. She took this skill with her as she joined the American Association for the Advancement of Science, the Women’s Anthropological Society of America, and Daughters of the American Revolution (DAR). While with DAR, McGee took on many titles. She became the organization’s surgeon-general, librarian-general, vice president-general, and later historian-general all at various times between 1894 and 1898.

When the War with Spain broke out on April 21, 1898, the Army needed women to serve as nurses. At the time, outbreaks of typhoid, malaria, and yellow fever ran rampant in training camps. Initially, men served in nursing roles but quickly were overwhelmed by the number of cases. In addition, male nurses were also being called to fight on the front lines. The Army decided to contract female nurses. Hundreds of women wrote in to the war department stating their willingness to serve. When McGee learned of this response, she suggested that DAR build its own hospital corps of trained nurses. The DAR agreed and appointed her the director of the DAR Hospital Corps (DARHC). Breakouts of diseases in camps gave DARHC the opportunity to prove themselves. At the time, nursing as a career path for women was in its infancy. Despite this, McGee pushed to only hire trained professional nurses. She recruited 1,600 qualified nurses into the program. The efforts of the DARHC paid off in August 1898 when Brig. Gen. George M. Sternberg promoted McGee to the acting assistant surgeon in the U.S. Army. She was the only woman promoted to an officer rank during the War with Spain.

At the end of the war in 1899, McGee drafted legislation to permanently establish the Army Nurse Corps. During the war, nurses worked either with private organizations like the DAR or as contractors. A lack of uniform training and hierarchy created problems. After the war, the newly formed Army Nurse Association tried to help the nurses since they received no benefits. At the request of the Surgeon General, McGee began drafting article 19 of the Army Reorganization Bill to ensure Army nurses counted as official members of the military and received veteran status. On February 2, 1901, her work paid off when Congress passed the Army Reorganization bill making the Army Nurse Corps permanent.

McGee continued to fight for the rights of the nurses who served in the War with Spain throughout her life. In 1922, legislation passed that required nurses to serve 90 days before they gained benefits. In her 1926 testimony to Congress, McGee said “The Spanish War nurses are veterans in every sense of the word… They fought the enemy of disease, which was the real enemy in the Spanish-American War, and they took the medicine of death and illness, just as the soldiers did. ”

When her husband passed away from prostate cancer in 1912, McGee took a step back from medicine to focus on her family, particularly her youngest son Eric’s schooling. She lectured on hygiene at various colleges in her spare time. While McGee was an activist in many regards, she took an interest in the eugenics movements which is a school of thought deemed racist today. McGee died on October 5, 1940, from a cerebral hemorrhage. She was laid to rest at Arlington National Cemetery with full military honors. McGee’s legacy lives on through the Army Nurse Corps and the standards she set for Army nurses.