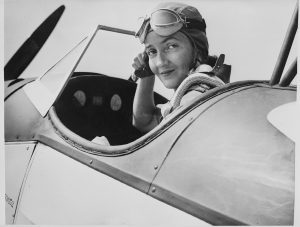 An accomplished pilot and leader, Nancy Harkness Love was an early supporter of women’s equal involvement in military service. Love served as a civilian in the Army Air Force, commanding the first units of female pilots during World War II in the Women Air Service Pilots (WASP). She fought gender stereotypes, training members of the WASP the same as male pilots, and pushed for them to fly the same missions. Love’s direct leadership of over 300 pilots during her career paved the way for all future female pilots.

Hannah “Nancy” Lincoln Harkness was born to Dr. Robert Harkness and Alice Chadbourne on February 14, 1914, in Houghton, Michigan. Her interest in flying started as a young teen. When Love was 13 years old, she saw Charles Lindbergh land the Spirit of St. Louis in Paris. A few years later, a pilot offered residents in Love’s hometown plane rides for a small fee, sparking Love’s passion for flying. Despite her parents’ disapproval, Love convinced them to send her for pilot lessons. She obtained her private pilot’s license at the age of 16 after one month of lessons.

In 1932, while attending Vassar College, Love received her commercial pilot’s license and earned money transporting people from Poughkeepsie, New York to various airports in the Northeast. One day, Love took her brother on a flight around a nearby school. One daring stunt ended in a crash landing, but earned her the title “The Flying Freshman” on campus. Love held this title until the Great Depression. With her parents no longer able to afford Vassar tuition, Love left school during her junior year. She began work as an aircraft sales person in Boston, Massachusetts, where she met Robert Macure Love, whom she married in 1934. Love then worked as a test pilot for various companies, including the newly established Bureau of Air Commerce (now the Federal Aviation Administration), where she helped test tricycle landing gear, now standard on planes. She also flew across the country to convince towns and farmers to paint water towers and barns with navigational aids, making flying safer.

When World War II began in Europe in 1939, Love saw an opportunity for women like herself to get involved with the war effort. She wrote to Lt. Col. Robert Olds (who worked in the Plans Division of the Office of the Chief of the Air Corps) with a proposal for a unit of female pilots to transport planes from factories to military bases. This, she argued, would employ already-qualified women while allowing men to be available for active duty. Olds gave the proposal to his superior, General Henry Arnold, but he rejected it.

In 1942, the Loves moved to Washington, D.C. when Robert began working as the Deputy Chief of Staff for the U.S. Army Air Forces Air Transport Command (now the U.S. Air Force Air Mobility Command). The aviatrix made a daily commute by plane from their home in Washington D.C. to her job with the civilian division of the Air Transport Command in the Operations Office of the Northeast Sector in Baltimore, Maryland. Robert mentioned this to his boss, Col. William Tunner (Commander of the Air Transport Command Ferrying Division). Impressed by Nancy’s flying skills, Tunner began discussing the formation of an all-female ferrying division with her. The proposal was again taken to General Arnold, who approved it. Nancy was appointed director of the Women’s Auxiliary Ferrying Squadron (WAFS) at New Castle Army Air Base in Delaware (now New Castle National Guard Base). At the age of 28, she became the first female pilot of the Army Air Forces.

Love set a strict code of conduct, stating, “if the WAFS are to succeed, our personal conduct must be above reproach… There cannot be the faintest breath of scandal. Among other things, this means you may not accept rides with male pilots.” The WAFS faced criticism from the media and male pilots, and Love strove to improve the reputation of the WAFS. She successfully advocated for the War Department to end restrictions on female pilots flying during their menstrual cycles and flying high powered planes. With these rules overturned, Love became the first woman to pilot the Army Air Force’s high powered planes, including the P-51 Mustang, P-38 Lightning, and the B-17 Flying Fortress heavy bomber. Love’s high expectations and efforts to ensure women could fly unrestricted allowed female pilots to further serve their country.

Love only held her leadership position with the WAFS for a short period of time. In 1943, the WAFS merged with Jackie Cochran’s Women’s Flying Training Detachment to form the Women’s Airforce Service Pilots (WASP). Cochran became director of the WASP, and Love became the executive in the Air Transport Command division. Love oversaw six ferrying squadrons with over 300 female pilots. Women between the ages of 21 and 35 with a pilot’s license could apply and trained as intensely as male pilots. The WASPs transported planes from factories to bases and served as test pilots. Love ensured that women flew every model of plane used by Americans throughout the war.

Love pushed for the WASPs to expand their missions. At one point, General Arnold petitioned Congress asking for the WASPs to fly all domestic missions, allowing the transfer of male pilots to Europe. However, those male pilots resisted, claiming the WASPs were undertrained. Due to the continued backlash, and Cochran’s unsuccessful attempt to militarize the WASPs, the Army Air Force disbanded the WASPs in 1944, and Love hung up her uniform. As the WASPs were never integrated into the Army Air Force (Cochran resisted the WASPs integration into Women’s Army Corps), they were not immediately given veteran status. However, Love received an Air Medal for her leadership and the rank of lieutenant colonel in the Air Force Reserve in 1948. Love and her husband moved to Martha’s Vineyard, Massachusetts where they raised three daughters. She continued to fly her family from their home to the mainland when needed.

Love was the first woman to pilot almost all of the Army Air Force’s high-performance, combat planes. Under her command, the WASPs made 50 percent of fighter plane deliveries in one year. She continued to work for WASPs to be recognized as veterans. In 1979, three years after Love’s death, the WASPs became officially recognized as service members. Love’s strength and leadership contributed to the success of the WASPs and the pilot careers of women. Her focus on training women to complete the same missions as men was an early step to making women in the sky “as commonplace as riding on a trolley car.”

Nancy Love passed away from cancer at the age of 62 on October 22, 1976. She was posthumously inducted into the Airlift/Tanker Association in 1996, the Michigan Women’s Hall of Fame in 1997, and the National Aviation Hall of Fame in Dayton, Ohio in 2005. There is a statue dedicated to her at the New Castle County Airport in Delaware. Love’s legacy lives on through her daughter and grandson, who are both pilots.