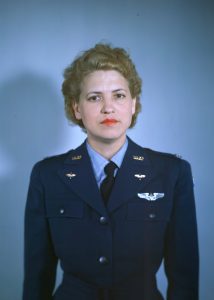 Col. Jackie Cochran described her life as a journey from “sawdust to stardust” in her 1954 autobiography, “The Stars at Noon.” Her ambitious and outgoing personality made this a reality– from growing up in poverty, to leading women in the air during wartime, and becoming a record-setting pilot. The aviatrix soared to new heights to prove what women can do.

Jacqueline “Jackie” Cochran was born Bessie Lee Pittman in Muscogee, Florida. Her exact birth date is debated between sources– her gravestone lists 1906, but Air Force records list her date of birth as May 11, 1910. Her family of seven lived in poverty and moved between Florida mill towns. At eight years old, Bessie began working at a local cotton mill. She dropped out of school at nine years old to work full time. Cochran claimed in her adult life that she was an orphan and the Pittmans were her foster family.

When she was 14, Cochran married and had a child with Robert Cochran, whose name she used for the rest of her life. At the age of 15 she sought a job change, left her son with her parents, and moved to Montgomery, Alabama to work in a beauty shop. Her son died three years later and she divorced her husband. While in Alabama, she developed a passion for beauty and cosmetics. In 1929, Cochran moved to New York, changed her name to Jacqueline, and worked at various Saks Fifth Avenue salons between New York City and Miami. In New York, Cochran developed an interest in flying. In 1932, she met Floyd Odlum in Miami. Cochran told him of her desire to start a cosmetics company. Odlum encouraged her to become a pilot so she could transport products and grow a new company. Cochran began taking lessons and obtained her pilot’s license in three weeks on August 17, 1932. Four years later, Odlum and Cochran married. He helped finance the start of her cosmetics company, Wings to Beauty, Jacqueline Cochran Inc., as well as her flying dreams.

As her cosmetics business took off, Cochran caught the air racing bug. She became the first woman to enter the Bendix Transcontinental Air Race in 1935. She flew the race several times and won the Bendix Trophy in 1938. By 1941, she had set several speed records, worked as a test pilot, and was involved in large flying organizations. A close friend of Amelia Earhart, Cochran served as president of her international organization for female pilots, the Ninety-Nines, from 1941-43.

As the United States got involved in World War II, Cochran transitioned to piloting military aircraft. She advocated for women to fly for the Army, as European countries were already doing, but was met with resistance from American officers. Cochran took her talents, and 25 female pilots, to England in 1941, becoming the first woman to ferry a bomber plane overseas. There, she trained female pilots for aircraft ferrying service in the British Air Transport Auxiliary. After learning of the formation of Nancy Love’s Women’s Auxiliary Ferrying Squadron (WAFS), Cochran approached U.S. Army General Henry Arnold about a similar U.S. training and recruiting unit for female pilots. Arnold sent Cochran to Sweetwater, Texas to form the Women’s Flying Training Detachment (WFTD) in 1942. While the organization was under the Army Air Corps, the women remained civilians. Cochran’s organization focused on recruiting women for specialized pilot training, and the graduating women moved to the WAFS.

The two organizations merged to form the Women Airforce Service Pilots (WASP) with Cochran as director in 1943. She oversaw training at over 100 bases and the missions of over 1,000 women pilots, many of whom performed acts worthy of service awards (the WASPs were not honored for their service until 2009, when they were presented with Congressional Gold Medals). As the war progressed, Cochran wanted to militarize the WASPs and fly all domestic missions. However, she wanted to keep the WASPs separate from the Women’s Army Corps due to their requirement differences. Cochran suggested the WASPs disband if they could not be militarized. After her unsuccessful effort to make the WASPs their own unit in the Army Air Corps and backlash from male pilots, the organization was disbanded in 1944.

Cochran worked as a correspondent for “Liberty” magazine for the rest of the war, witnessing the surrender of Japanese Gen. Tomoyuki Yamashita and the Nuremberg Trials. In 1945, she was awarded the Distinguished Service Medal for her direction of WASP, the first civilian woman to receive the award during World War II. She continued her military service with a commission as a lieutenant colonel in the U.S. Air Force Reserve in 1948. As women were restricted from flying military missions until 1976, Cochran served as a consultant for the Air Force and National Aeronautics and Space Administration (NASA). From 1960-61, she financially supported the Lovelace’s Clinic Women in Space Program, which offered medical testing to female pilots interested in becoming astronauts. Yet, she later spoke against sending women into space, possibly because she was not eligible to go herself. She continued flying as a civilian in her Lockheed Lodestar. 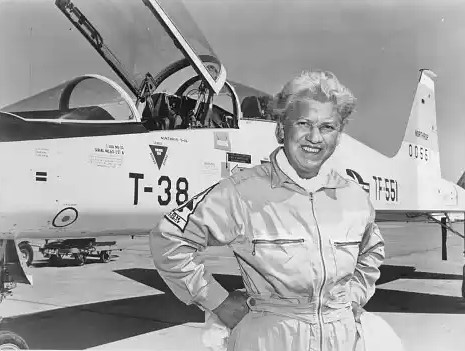 Jackie Cochran in front of a Northrop T-38 Talon, circa 1962. Smithsonian Institution

With a military career and thriving cosmetic business under her belt, Cochran continued to break records in the sky following the war. She trained with Maj. Charles “Chuck” Yeager, the first man to break the sound barrier, in a Canadair F-86 Saber jet. She became the first woman to break the sound barrier on May 18, 1953. Cochran gained permission by the Air Force to fly a Northrop T-38 Talon, and set an altitude record of 56,071.80 feet. She was awarded the Gold Medal of the Fédération Aéronautique Internationale (World Air Sports Federation or FAI) for these records. In 1964, Cochran flew past Mach 2, twice the speed of sound. She held the speed, altitude, and distance records for both female and male pilots until after her death.

Cochran became involved with as many organizations as possible, all while maintaining her cosmetics business. When not flying or consulting for the Air Force, Cochran served as the first female president of FAI from 1958-60, an international organization for air sports, overseeing record-breaking flights. She even had a brief attempt at a political career. Cochran maintained a friendship with General Dwight D. Eisenhower and helped organize his presidential campaign rallies; in 1952 she convinced Walt Disney Studios to create an animated cartoon for his campaign. She ran for Congress in 1956 and won the Republican nomination, but lost to Democrat Dalip Singh Saund.

In 1967, Cochran was diagnosed with a heart disease, preventing her from flying jets. She continued to consult for the Air Force and NASA until she retired with the rank of colonel in 1970. Cochran’s health continued to decline and forced her to retire from flying.

In 1973, Cochran and her husband moved to Indio, California, where they resided until his death in 1976 and her death in 1980. She is memorialized in the International Aerospace Hall of Fame and the U.S. Aviation Hall of Fame. In 2004, the airport near Indio was renamed the Jacqueline Cochran Regional Airport.

Cochran strove not to be the best female pilot, but to be the best pilot. She made her name known across the globe with her extensive list of accomplishments. She worked to get women involved in the war effort, trained them to be the best, and involved herself in projects that put women in the air. Yet, she had mixed feelings about the integration of women into the armed forces. Despite Cochran’s own trailblazing career and the WASPS accomplishments, she suggested the WASPS be disbanded. Cochran believed that only the best women should serve, but not in combat missions. She advised against women in space or as airline pilots, stating that the moment they had children they would leave service. Jackie Cochran was an aviatrix who paved her own way in life, but her strong and varying opinions make her a complicated figure.