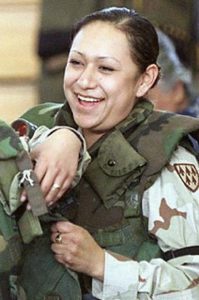 Lori Ann Piestewa at Fort Bliss, Texas on February 18, 2003 as she prepares to deploy to Iraq. U.S. Army.

Spc. Lori Ann Piestewa embodied selfless service to the fullest. After a lifetime of perseverance, Piestewa volunteered for deployment in 2003. She and the 507th Maintenance Company were ambushed after taking a wrong turn on a convoy. Piestewa was the first Native female Soldier killed in action on foreign soil. Her commitment and sacrifice have inspired her family and the country.

Throughout her life, Piestewa had a strong sense of duty to the people around her. Lori Ann Piestewa was born in December 1979 in Tuba City, Arizona. Her father, Terry Piestewa was Hopi, and her mother Priscilla “Percy” Baca Piestewa was Hispanic. Piestewa was the youngest of four children. Her parents made sure that their children had opportunities to connect with both sides of their culture. As a baby, Piestewa received the Hopi name Köcha-hon-mana or White Bear Girl. Her parents passed on the Hopi belief in nonviolence and the importance of helping others. Piestewa excelled at sports and started playing shortstop with the town’s Little League Softball team when she was eight years old. Her team made it to the championship game that year. The day before the championship game, Piestewa was practicing ground balls with her coach when one of the balls hit her in the face and she broke her nose. While her family tried to deter her, she insisted on playing because “her team was dependent on her.” Her team went on to win the game. Looking back on this story, Piestewa’s brother, Adam, said “she couldn’t not play.”

Piestewa’s family had a long tradition of military service. Her grandfather served in World War II and her father served in Vietnam. In high school, Piestewa joined the Junior Reserve Officers’ Training Corps (JROTC). In Tuba City, there was not much for residents to do and since she was always looking for ways to challenge herself, JROTC seemed like the perfect fit. Piestewa became a commander in the JROTC at her school and planned to attend college. During her senior year of high school, she discovered that she was pregnant. She married her boyfriend and father of her baby, Bill Whiterock, in October 1997 shortly before he left for Army basic training. Piestewa graduated from high school early in December 1997. After Whiterock finished training, they moved their new family to Fort Bragg, North Carolina where Whiterock was stationed. While in North Carolina, they had another child but soon separated. Piestewa moved home to her parent’s house with the two young children as Whiterock ended his time with the Army.

Around that time, Piestewa began considering her own Army career as a more serious option. She appreciated that the Army could give her children a secure future. Her mother said, “She wanted to fend for her children. She was going to build us a house and take care of us. I think she weighed the options that she had. We’re not rich enough to send her to college. When you have obstacles in your way, you take what life offers.” On March 30, 2001, Piestewa left for basic training at Fort Sill, Oklahoma. After basic training, she continued on to Advanced Individual Training in Fort Lee, Virginia before being promoted to private first class. She was then assigned to the 507th Maintenance Company in Fort Bliss, Texas. For the 507th, Piestewa did clerical work and kept track of supplies.

At Fort Bliss, Piestewa roomed with Pfc. Jessica Lynch. The two became close friends and often referred to the other as “roommate” or “roomie.” In January 2003, the 507th received word that they would be deployed to Iraq. Piestewa was still recovering from shoulder surgery so she was supposed to remain at Fort Bliss. Knowing her roommate was anxious about the upcoming deployment and wanting to stay with her unit, Piestewa petitioned to be deployed as well. She told her brother that she wanted to be in a position where she could help. On February 17, Piestewa’s parents drove down to see their daughter off to Iraq. On that day, she did a television interview with her family where she said “It’s very important knowing that my family is well taken care of,” and said with a smile that she was “ready to go.”

On March 23, 2003, the 507th was on a convoy carrying supplies when they made a wrong turn and missed their checkpoint. Piestewa was driving a Humvee in the back of the convoy. Along the way, Lynch’s truck broke down. Piestewa noticed and drove over to her, calling, “get in, roommate.” As the convoy continued on, they were ambushed in the city of Nasiriyah, Iraq. The left tire of Piestewa’s Humvee was hit by a rocket-propelled grenade. During the ambush, Piestewa, Lynch, and the rest of the convoy were all taken prisoner. Initially, it was believed that all of the members of the convoy were missing in action. While held prisoner in a hospital in Nasiriyah, Piestewa died from her injuries. She was only 23 years old. On April 1, Lynch, the only survivor from their Humvee, was rescued by Special Forces. The Special Forces team also recovered Piestewa’s body from a mass grave behind the hospital. In May 2003, against the wishes of her family, NBC released a video of her in the hospital after the attack. Her family came out with a statement against this decision saying it was disrespectful and invasive to show her final moments.

Piestewa said to a friend before she left for Iraq that “I’m not trying to be a hero,” but all who know her remember her as one. After her death, Piestewa was promoted to specialist. In 2003, the Grand Canyon State Games became the Lori Piestewa Games in honor of Piestewa’s love of sports. A popular trail in Arizona was given the name Piestewa Peak in 2008 to honor her and other fallen Soldiers. Lynch says that Piestewa was the hero that day in Nasiriyah. Wayland, Piestewa’s oldest brother, said “My sister is a warrior because she did the right thing, the honorable thing: going to Iraq when she didn’t have to, because she felt it was the ethical and moral thing to do. That’s what being a warrior is about: doing what’s right, even when it’s difficult and means sacrifice.”