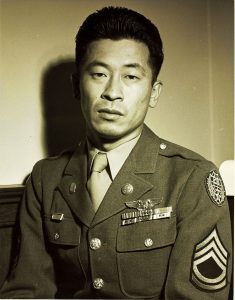 Pilot and patriot Ben Kuroki defended the United States throughout his life, even when America failed to fight for him. Kuroki was the only member of the United States Army Air Force of Japanese heritage to fly in the Pacific Theatre of World War II. In total, he flew in 58 combat missions in his two tours abroad.

Kuroki’s upbringing was quintessentially American. Born in Nebraska on May 16, 1917, he was one of ten children of Japanese immigrants. Kuroki’s father nicknamed him “Lucky Ears” because of small holes he was born with on each ear, which, according to family lore, meant he would be lucky. He was a popular student, playing basketball and serving as his senior class’ vice president before graduating in 1936. Kuroki felt deeply connected to his home in Nebraska, later crediting his time there as a “solid foundation for patriotism.”

The attack on Pearl Harbor by Japan in December 1941 impacted the lives of all Americans, Kuroki included. Kuroki’s father, Shosuke, called a family meeting soon after the attack and subsequent declaration of war by the United States. Shosuke encouraged Ben and his brother, Fred, to enlist in the Army. Ben and Fred agreed, but it was a challenge for Japanese Americans to enlist after the attack. Second-generation Japanese Americans, also called Nisei, endured intense scrutiny. Many of those already-enlisted were removed from active duty, and those trying to enlist had to fill out questionnaires about their loyalties before even being considered for military service. Likely due to an oversight, the Kuroki brothers successfully enlisted and started basic training camp in Sheppard Field (now Sheppard Air Force Base), Texas in early 1942. Despite being told that Japanese American soldiers were not accepted for overseas postings, Kuroki’s request was approved. He reported to his first overseas assignment in England, where he filled a need for aerial gunners.

Despite the obstacles in his way, Kuroki went above and beyond the call of duty in fighting for his right to defend the United States. Operating the dorsal turret gun on a B-24 Liberator, he survived a crash and imprisonment by Spanish authorities in Morocco. While Spain had an official policy of neutrality during the war, its facist leadership sympathized with the Axis Powers. The U.S. Department of State negotiated the release of Kuroki and his crew after three months, and he returned to England. Over his next year of service, Kuroki flew 30 combat missions in Europe—five more than were mandated. He later said he flew the additional missions in honor of his brother, Fred, who was stationed stateside. Having participated in so many successful missions on the European front, Kuroki hoped to continue the fight in the Pacific Theater of Operations. Asian American Soldiers were previously excluded from fighting in the Pacific Theater due to misplaced fears over their loyalties. Kuroki’s request to fight was only approved with the explicit support of Secretary of War Henry Stimson. Kuroki is the only known Japanese American Soldier to fly combat missions in Asia during World War II, serving in the 484th Squadron, 505th Bombardment Group, 20th U.S. Army Air Force. He flew 28 missions in Asia alone.

Not only did Kuroki defend the nation, he encouraged others to do so, as well. Between his deployment in Europe and the Pacific, he visited Japanese American internment camps created by President Franklin D. Roosevelt’s Executive Order 9066. There, he encouraged fellow Nisei’s to enlist in the 442d Regimental Combat Team, which Roosevelt approved in 1943 for enlistment by “loyal American citizens of Japanese descent.” His patriotism touched people across the country, inspiring a feature in a “TIME Magazine” article. Kuroki’s support of the Army came at a time of pervasive prejudice against Japanese Americans in the country. Those who had not been moved to internment camps were severely limited in their freedom. Kuroki was aware of the deep inequities inflicted on his community, but hoped that Japanese Americans’ would prove their loyalty over time through patriotism and military service. His record served as an example of what Japanese Americans could achieve, having earned two Distinguished Service Crosses and an Air Medal with five oak leaf clusters. Kuroki’s success was so renowned, Army Chief of Staff Gen. George C. Marshall later wanted to meet him.

After the war, Kuroki used his influence to advocate for racial equality. In 1950, he graduated from the University of Nebraska with a degree in journalism and worked as a reporter for several decades. He regularly traveled for speaking engagements, championing equality for Americans of color. Kuroki reflected on his experience in the Army, noting, “I had to fight like hell for the right to fight for my own country.” He earned the Distinguished Service Medal in 2005 for his heroic service and patriotism. Kuroki died in 2015 at the age of 98. His life has been represented in several biographies, stories, and documentaries that continue to inspire today.

Jakab, Peter. “Ben Kuroki: A Story We All Need to Know.” Smithsonian National Air and Space Museum. May 6, 2020. https://airandspace.si.edu/stories/editorial/ben-kuroki-story-we-all-need-know.