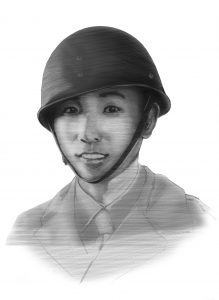 1st Sgt. Chikara “Don” Oka, a Japanese American “Nisei” Soldier, served in the Military Intelligence Service (MIS) during World War II. Serving as an interpreter, translator, and interrogator, Oka provided valuable intelligence services to American forces fighting in the Pacific. He served in the MIS along with two of his brothers, Isao and Masao, while two of his younger brothers, Takeo and Teji, served in the Japanese Military. With his family on opposite sides of a war, Oka’s loyalty to the United States, along with thousands of other Nisei Soldiers, helped America gain victory in World War II.

Oka was born in Watsonville, California on January 5, 1920 to a family of strawberry farmers. When Oka was five years old, he and his four brothers moved to Japan to live with his aunt and uncle. His parents, Shutaro Oka and Ariyo Itano, remained in United States. He spent the rest of his childhood in Japan where he learned Japanese and attended agricultural school. After graduating at the age of 17, Oka moved to Castroville, California to live and work with his two older brothers.

Oka was attending art school, a new found passion of his, when the Japanese attacked Pearl Harbor on December 7, 1941. He was drafted on February 16, 1942 and he placed his dream of becoming an artist on hold. After he completed basic training at Camp Robinson, Arkansas, Oka attended Japanese language school at Camp Savage, Minnesota to serve in the MIS.

After three months of training, Oka took part in Operation Cottage, the American invasion of the island of Kiska on August 15, 1943. Part of the Aleutian Islands off the coast of Alaska, Kiska was taken by the Japanese in June 1942. Oka participated in one of the first waves of the invasion attached to the Alaskan Scouts, a platoon of native Alaskan Soldiers. The Americans seized the island without firing a shot as the Japanese evacuated the island beforehand. After translating a variety of enemy documents, Oka served at the Checkpoint Joint Intelligence Center in Hawaii.

In fall 1944, Oka transferred to the island of Tinian, a recently captured post in the Mariana Islands. On Tinian, he completed what he believed was his greatest contribution of World War II, helping operate a civilian prisoner of war camp. Over 13,000 Japanese civilians needed support while being held prisoner after the island’s capture by the United States on August 1, 1944. This created important work for the MIS. Oka helped establish schools, distribute supplies, create sanitation protocols, construct buildings, and translate for Japanese civilians. While performing this duty, he exposed himself to danger from Japanese air raids. On Christmas Eve 1944, Oka ran for cover as a Japanese plane attacked facilities on Tinian. The Japanese plane was later shot down as it attempted to retreat. What he did not know at the time was that the pilot of the plane was Lt. Takeo Oka, his younger brother.

Takeo, along with their parents and other brothers, was in Japan when the war broke out. Oka, along with his older brothers Isao and Masao, were drafted by the United States. With his parents subject to the threat of American bombers, the entire Oka family was split by the war. He, along with Isao and Masao, survived the war but his brother Takeo died in the Christmas Eve attack on Tinian. His other younger brother, Teji, was badly wounded when the ship he was aboard sank at the Battle of Okinawa. Oka had no contact with his family in Japan until years after the war, when he learned of Takeo’s death over Tinian.

While Oka’s family was separated by the war, Japanese Americans faced prejudice and discrimination. Executive Order 9066, issued February 19, 1942 led to the forced relocation of all Japanese American civilians on the West Coast to internment camps throughout the United States. Many Nisei families lived in the camps, including family members of Oka’s fellow Soldiers. He and other MIS members also faced unequal treatment from white American military personnel. On one occasion, Oka’s men tried to board a ship docked in Pearl Harbor but were not allowed to due to their Japanese heritage.

The war ended after the atomic bombings of the Japanese cities of Hiroshima and Nagasaki in August 1945. Oka participated in the occupation of Japan until discharged on December 1, 1945. Soon after, he contracted a severe case of tuberculosis and went to Whipple Veterans Hospital in Arizona.

After seven years recovering, and the removal of five ribs, Oka was finally released from the hospital. He graduated from art school and began a successful career in advertising. In 1960, he married Wakako Susan and gained a step-daughter, Yukiko. The couple later had a son, Isao. He started a successful design studio in Los Angeles where he worked until he retired in 1998. After the death of Wakako from Alzheimer’s in 2005, he dedicated more time to sharing his experiences in World War II. He died on March 10, 2015 at the age of 95. The service of Oka, along with that of thousands of other Japanese Americans who served in the MIS, is widely considered to have shortened the war against Japan.

Classroom and Research Materials:
“Behind the Wire.” Immigration and Relocation in U.S. History. Library of Congress. Accessed August 3, 2021. https://www.loc.gov/classroom-materials/immigration/japanese/behind-the-wire/.