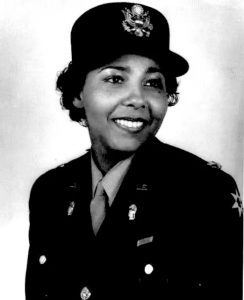 Soldier and community activist, Lt. Col. Charity Adams Earley served as the highest-ranking Black woman officer during World War II. Her service during the war helped defeat the Axis Powers. But Earley also fought against segregation in the Army and helped open the doors of opportunity for African American women in the military. Faced by challenges all her life, Earley’s commitment to activism helped her better her life and the lives of others.

Charity Adams Earley was born in Kitrell, North Carolina on Dec. 5, 1918. The oldest of four children, she grew up in a family of educators; her father was a minister and her mother a former teacher. Earley moved to South Carolina as a young girl and she considered the state home. Forced to navigate racial prejudice and discrimination, Earley faced these challenges with her intellectual skills that she gained from her mother’s instruction. She entered school as a second-grader and graduated high school two years early as valedictorian of her class.

Earley chose to attend Wilberforce University, a historically Black school in Ohio. She majored in math, Latin, and physics. She was also active outside the classroom and participated in various student organizations and held a part-time job. After she graduated in 1938, she returned to South Carolina to teach. Over the next four years, she taught math and science to junior high students and took summer classes at The Ohio State University to get her masters.

With the onset of World War II, the United States rapidly expanded their military forces. Formed in early 1942, the Women’s Auxiliary Army Corps marked the beginning of a separate department which allowed women to serve in the Army. Later changed to Women’s Army Corps (WAC), the Army recruited talented women capable of performing non-combat roles. That spring, Adams applied for entry into the WAC, which the Army accepted.

In July 1942, Earley reported to Fort Des Moines, Iowa to train with the first WAC officer class. There, she experienced the Army’s segregated policies for the first time. On the train ride to Fort Des Moines, she and the 39 other Black women of the class began to make friends with their white classmates. However, as soon as they stepped on to the fort, segregation was in full effect. Within 30 minutes of their arrival, the Army separated the Black and white candidates and sent them to different living units. Despite the segregated environment, Earley excelled. She graduated in August 1942, becoming the first Black officer of the WAC. She led the 3d Company, 3d Training Regiment, made up of two white and one Black platoon. Stationed in Fort Des Moines until 1944, she worked as a station control and staff training officer. The Army promoted her to major in 1943, making her the highest-ranking female officer at the fort and one of the highest-ranking WAC officers in the nation.

In December 1944, Earley deployed to Europe leading the first Black WAC unit to serve overseas. The Army gave Earley command of the 6888th Central Postal Battalion. Stationed in Birmingham, England, they organized and sorted mail for delivery to U.S. Soldiers in the European Theatre. Despite segregated living conditions, her troops diligently worked around the clock seven days a week, working in three shifts, to ensure the delivery of millions of letters. Given six months to clear months of backlogged mail, the unit completed the job in half the time. The 6888th then moved to facilities in France to organize more undelivered mail to the European theatre.

Earley served in Europe until late 1945. For her work in Europe with the 6668th, Earley received a promotion to lieutenant colonel, the highest possible rank for a Soldier in the WAC. After the war, she worked at the Pentagon for a short time before requesting a discharge in 1946. After her service, she returned to The Ohio State University and completed her master’s degree in vocational psychology. She married Stanley A. Earley, Jr. in 1949 and they settled down in Dayton, Ohio, where they raised two children. She devoted the rest of her life to education and activism, serving as a dean at Tennessee Agricultural & Industrial State College (now Tennessee State University), Georgia State University, and on many community business and organization boards. Additionally, in 1982, she founded the Black Leadership Development Program that focused on teaching young African Americans to be leaders in their communities.

She died in 2002 in Dayton, Ohio. The National Postal Museum, National Women’s History Museum, Ohio Women’s Hall of Fame, Smithsonian Institute, South Carolina Black Hall of Fame, and many other organizations have recognized her dedicated service and work on promoting opportunities for Black Americans. Though she faced many challenges throughout her life, she never backed down and continued to fight to better herself and others. Earley helped pave the way for future African American women to serve in the Army.