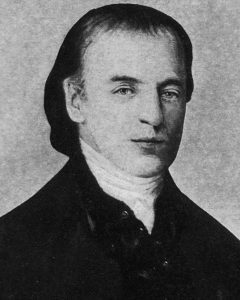 Though he was born across the Atlantic, Dr. James Craik played a crucial role in America’s fight for independence. He served the country with his medical talents and became a close friend and confidant of George Washington. Craik served in various roles during his time in the Army and helped save hundreds of soldiers’ lives.

Craik was born in the parish of Kirkbean, near Dumfries, Scotland, in July 1730. He was the son of William Craik, a British Parliament member who owned a 1,400-acre estate, but was born out of wedlock. Though rare at the time, Craik’s father accepted him as his son and provided for his care. When Craik came of age, he entered medical school at the University of Edinburgh. After graduation, he enlisted in the British Army as a doctor and surgeon, which allowed him to forgo several more years of school. In 1750, he left England for the West Indies to serve as a British army surgeon. A few years later, he retired from the British army and moved to Virginia to practice medicine.

Soon after moving to Virginia, he settled on the frontier in Winchester and began practicing medicine at Fort Loudon. Living on the frontier meant Craik served as a literal lifeline for settlers who risked their lives living far away from any sort of military protection. In March 1754, Craik rejoined the military as a surgeon for the Virginia Militia Regiment, led by George Washington, shortly before the outbreak of the French and Indian War. On July 9, 1755, the regiment fought at the Battle of the Monongahela, also known as Braddock’s Defeat, where the British failed to capture the French-held Fort Duquesne in Pennsylvania. The British commanding officer, General Edward Braddock, was among the casualties, and Craik was unable to save him from his mortal wounds.

Craik served with Washington until the capture of Fort Duquesne in November 1758. Having seen the hardships of the front lines, Craik decided to return to civilian life and moved to Port Tobacco, Maryland to open up another medical practice. Craik’s service with Washington fostered a lifelong friendship. He even traveled with Washington to observe lands Washington received west of the Appalachian Mountains for his military service. This friendship inspired Craik to join the push for independence. In 1774, he began attending local revolutionary meetings in Charles County, Maryland, and actively protested the blockade of Boston. Craik returned to military service under Washington that year and served with him throughout the War for Independence.

Craik became the Assistant Director General of the Medical Department of the Continental Army in 1778. Along with attending to wounded Soldiers in the field, he also established hospital services for the sick and injured. At the time, hospitals not only performed procedures on patients but also made all the drugs and medicines the patients needed. Establishing more hospitals allowed for faster care and was a priority for the Medical Department during the war. In 1778, he warned Washington of the “Conway Cabal,” a plan by several disgruntled officers to replace Washington with Maj. Gen. Horatio Gates. These officers tried to turn Craik to their side, but he instead went to Washington with news of their plan.

In 1780, the Army reorganized its medical department and Craik was one of four doctors designated as Chief Hospital Physician and Surgeon. The following year, Director General William Shippen resigned. Washington desired to have Craik assume the role, but Congress appointed John Cochran instead. Craik served as the second in command of the Medical Department for the remainder of the war.

After the war, at Washington’s suggestion, he settled in Alexandria, Virginia, and became Washington’s personal physician. Craik operated his medical practice and remained in civilian life until 1798. With the threat of war with France on the horizon, Washington was called back into service to lead the Army and brought Craik on as his Chief Medical officer. Craik served in this position until early 1800 when the U.S. avoided war and Congress downsized the Army.

Craik attended his old friend, Washington, during his final days. On December 13, 1799, Washington’s secretary, Tobias Lear, called Craik to Mount Vernon to care for Washington who was suffering from a serious throat ailment. Despite every attempt, the illness proved fatal, and Washington passed away the following day. After leaving the Army, Craik stayed in Alexandria, operating his practice until he died in 1814. Despite being born and raised in Scotland, he found a home in America and played a crucial role in the medical department during the Revolutionary War. Craik not only provided valuable medical service and advice to Washington but helped set up and provide treatment for thousands of Soldiers and civilians throughout his long career.

“TO HONOR SURGEON OF GEN. WASHINGTON; Shaft Will Be Dedicated at Alexandria (Va.) Grave of Dr. James Craik. FOUNDER OF MEDICAL CORPS He Closed Eyes of Father of Country in Death After Fifty Years of Close Friendship. With Washington at the End. Recalled to Service in 1798.” New York Times, October 7, 1928. https://www.nytimes.com/1928/10/07/archives/to-honor-surgeon-of-gen-washington-shaft-will-be-dedicated-at.html.

“When George Washington Was Searching for a New Surgeon General.” NLM in Focus (blog). February 22, 2018. https://infocus.nlm.nih.gov/2018/02/22/when-george-washington-was-searching-for-a-new-surgeon-general/.