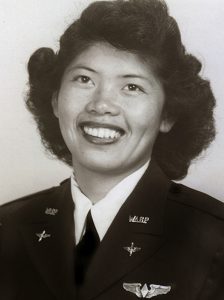 Pilot, physicist, and researcher Margaret Gee made history as one of two Chinese American pilots serving in the Women’s Airforce Service Pilots during World War II. A diversely accomplished professional, Gee devoted her life to public service in many forms.

Gee was bound for success from a young age. Born Gee Mei Gue in August 1923 in Berkeley, California, she was one of six children. Her father, a second generation Chinese American, worked hard to move his family from San Francisco’s Chinatown before she was born. Like many other Chinese American children, she went by her American name, Margaret, or more commonly Maggie, much of her life. Growing up, she enjoyed her family’s weekend trips to the airport in Oakland, California. There, Gee would look out for aviation pioneer Amelia Earhart, whom she grew to idolize. After her father’s death in 1929, Gee admired her mother’s dedication to her family and community. Upon graduating from high school in 1941, she enrolled at the University of California, Berkeley to study physics. However, the United States’ involvement in World War II halted her plans.

Early in the war, Gee decided she wanted to serve her country. In 1941, she left college to work in ship production at Mare Island Naval Shipyard alongside her mother. Her true ambitions, however, were in the air. Inspired by her childhood idol, Earhart, Gee wanted to become a pilot. She saved money from her work at the shipyard for flying lessons. After saving enough money, Gee moved to Minden, Nevada, to learn to fly. She earned her pilot’s license within six months, then immediately applied for the Women’s Airforce Service Pilots (WASP) training program. The WASP program was formed in 1943 when Army officials realized they needed more domestic pilots to free up members of the Army Air Force for deployment. The WASP offered female pilots a rare opportunity to serve. Despite the need, however, WASPs faced gendered discrimination from their male peers and commanders. It was deemed too controversial to enlist women into the military as WASPs. They were thus classified as civilians, though they were uniformed, trained, and followed the expectations of a member of the Army Air Force. Gee was a part of the only 8% of applicants allowed into the WASP, and only one of two Chinese Americans accepted.

Despite the challenges, Gee found success as a WASP. She trained in Sweetwater, Texas, and graduated with her silver wings on November 8, 1944. Later in life Gee reflected, “I consider myself very fortunate, that I could do something that I really enjoyed. I felt I was doing something for my country…” The WASP program ended in December 1944, but in her short time as a WASP, she was well-accomplished. She transported planes from factories to airbases to prepare them for war-front delivery, copiloted fighter planes in mock air fights, and trained male pilots at the Las Vegas gunnery school. WASPs were classified as civilians, so upon the end of World War II and the disbanding of the service, female pilots were released from their positions. Not until 1977 did Gee and her fellow WASPs earn military status for their service with the passing of Public Law 95-202.

Having already succeeded once in a male-dominated field, Gee returned to the University of California, Berkeley to succeed in another. She re-enrolled in college to earn her physics degree at a time when women were underrepresented in STEM fields. Not only did Gee earn her Bachelor of Science degree, she completed a Master of Science in Physics as well. In 1958, she began working in Berkeley’s Lawrence Livermore National Laboratory researching weapons systems employed in the Cold War. Gee worked or consulted on the lab’s nuclear and magnetic fusion programs for the rest of her career. It was at the lab that she met Warren Heckrotte, her life partner of almost 50 years.

Gee was also an accomplished community leader. She was highly active in the Democratic Party, starting in the Truman administration. Continuing her mother’s tradition of community involvement, she volunteered to run voter registrations and fundraisers. Throughout her life, she served as a member of the Alameda County Democratic Central Committee, the California State Democratic Party Executive Board, and the Asian Pacific Islander Democratic Caucus. Her influence culminated in her inclusion in the 1992 Democratic Party Platform Committee.
After a long and accomplished life, Gee died at the age of 89. In 2010, she was one of the few surviving WASPs to be presented a Congressional Gold Medal from President Barack Obama. The determined physicist and pilot believed in success and social change every step along her path, and said in 2003, “I’m very optimistic about the world and people… it will be alright…You can make changes. I think just one small person can make a little bit of change…”