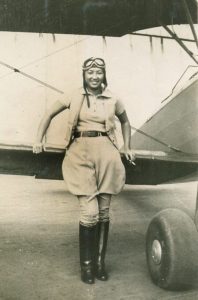 Hazel Ying Lee broke boundaries and made history as a Chinese American pilot during World War II. As only one of two Chinese American pilots in the Women Airforce Service Pilots, Lee survived long working hours, racial stereotyping, and a fall from an aircraft to follow her dream of flying. She ultimately gave her life to this dream.

Lee fell in love with flying early in life. The daughter of Chinese immigrants and business owners, Hazel Ying Lee was born the second of eight children in 1912. Growing up in Portland, Oregon, Lee was an adventurous and athletic child. She first discovered her love of flying at the age of 19 after sitting in on a friend’s flight lesson at the local airstrip. She immediately began saving money from her job as an elevator operator to buy her own flight lessons. Within a year of her first flight, she became one of the first Chinese American women to earn her pilot’s license. During her training, Lee met her future husband, Louie “Clifford” Yim-qun, a fellow Chinese American pilot.

As a second-generation Chinese American, Lee dealt with an inner cultural conflict many second-generation American citizens face. She lived a quintessentially American childhood, but was still motivated to defend China upon its invasion by Japan in 1933. Lee and many other Chinese Americans wanted to lend their skills in defense of their familial roots. She traveled to China with the plan of joining the Chinese Air Force. However, the Chinese Air Force did not admit female pilots. They instead offered her an administrative role. Dissatisfied, Lee moved to Canton, China (also known as Guangzhou). While there, she worked as one of the only female commercial pilots in the country. In 1938, she lived through the devastating bombing of Canton and spent the following year in Hong Kong as a refugee. Tired of feeling helpless in the face of war, Lee returned to the United States. Upon her return, she settled in New York City working in another administrative role.

The founding of the Women Airforce Service Pilots (WASP) by the Army Air Force created an outlet for Lee’s passion. In 1943, Army officials realized they needed more domestic pilots in order to free up male members of the Army Air Force for deployment. The WASP offered female pilots a rare opportunity to serve. Famous aviator Jacqueline Cochran, a racing pilot who later became the first woman to break the sound barrier, headed the WASP. She recruited female pilots, such as Lee, to join. Lee was only one of two Chinese American pilots accepted. While WASPs were racially unsegregated, they faced gender discrimination from their male peers and commanders. It was deemed too controversial to enlist women into the military. Thus, the WASPs were classified as civilians, though they were uniformed, trained, and followed the expectations of Army Air Force members. Lee began training in Sweetwater, Texas, in 1943. She was brave and quick-thinking, recovering from a fall out of an airplane by employing her parachute and walking back to base unscathed. During a visit from now-Maj. Louie, they decided to marry.

Lee’s dedication to her job came at a cost. After graduating from WASP training, Lee moved to Romulus, Michigan, where she flew in the 3d Ferrying Group, delivering aircraft parts for shipping to the European and Pacific war fronts. Lee, ever known as a “calm and fearless” pilot, survived yet another emergency landing in Kansas, only to be met with racial prejudice. Following the bombing of Pearl Harbor in 1941 by Japan, prejudice toward Japanese Americans was pervasive. While Chinese Americans tended to experience less discrimination than others of Asian American and Pacific Islander identities, they often had to specifically identify themselves as Chinese American to guarantee their safety. A farmer, convinced that a Japanese pilot was attacking, came toward Lee with a pitchfork upon her crash. He only backed down after she revealed her identity. In the fall of 1944, Lee moved back to Texas to attend Pursuit School, after which she was able to fly fighter aircrafts. Unfortunately, soon after this achievement, Lee suffered another accident. On November 23, 1944, Lee flew from Niagara Falls, New York, to Great Falls, Montana. When trying to land, however, mixed signals from the control tower caused Lee’s P-63 Kingcobra to collide with another. Lee was pulled from the wreckage, but died two days later from her injuries. She was 32 years old.

Lee did not receive just recognition for her sacrifice for several decades. Her family planned to bury her alongside her brother, a member of the U.S. Tank Corps who was killed in action just three days after Lee. Since WASPs were classified as civilians, Lee did not qualify for a military funeral. Her family instead paid for her body to be returned to Portland. The cemetery initially refused the Lee family’s burial request because of their Asian heritage, but lost the ensuing legal battle. Lee was one of 38 WASPs to die in service during World War II, none of whom received military recognition for their sacrifice. It was not until 1977, with the passage of Public Law 95-202, that Congress granted WASPs military status. The Oregon Aviation Hall of Honor inducted Lee in 2004 for her bravery and service, acknowledging her contributions to aviation.