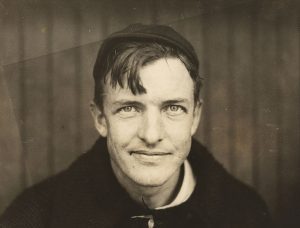 Christy Mathewson was one of thousands of American men who gave up their livelihoods to join the U.S. Army during World War I. Before the war, Mathewson was a champion Major League Baseball pitcher for the New York Giants. When the United States joined the fight in World War I, Mathewson gave up his career and joined the Army’s new Chemical Warfare Service in 1918. Mathewson’s sacrifice and service to his country led to the end of his baseball career and, ultimately, his death.

Christopher “Christy” Mathewson was born on August 12, 1880 in Factoryville, Pennsylvania. Christy’s father, Gilbert Mathewson was a Civil War veteran and a farmer. Gilbert and his wife, Minerva, had six children, of which Christy was the oldest. As a child, Mathewson and his siblings spent their spare time playing sports. By the age of 14, Mathewson was a strong enough baseball player to pitch for semi-pro baseball teams in Pennsylvania while still attending the local preparatory school. In 1898 Mathewson enrolled at Bucknell University to study forestry. There he played baseball, basketball, and football. Most well-known for his collegiate football skills, he was acclaimed as the “greatest drop-kicker in intercollegiate competition” by Walter Camp, originator of the All-American team. An all-around good student, Mathewson also excelled at academics, participated in band, glee club, Phi Gamma Delta fraternity, and served as student body vice president.

Mathewson’s athletic skills led to many opportunities. Soon he received an invitation to play for Norkfolk’s baseball team in the Virginia League. There he excelled and moved to the Major Leagues for his debut in 1900 with the New York Giants. During the 1901 season, he pitched a no-hitter and earned the nickname “The Big Six” from sportswriter Sam Crane who said that he was as fast as New York City’s Big Six Fire Company when putting out a fire. Mathewson’s skills on the baseball diamond reaped endorsements, advertisements, and acting opportunities. During the 1905 World Series, Mathewson shone. As the pitcher for the New York Giants, he recorded three shutouts against the Philadelphia Athletics, leading his team to a 4-1 win in the series. Throughout his career, Mathewson won 373 baseball games, tying for third in the Major League’s all-time records, as of 2021.

The Army’s draft during World War I interrupted the lives of many Americans. These drafts extended to professional baseball players. While some players chose employment in defense industries in the United States, 227 players decided to serve in the Armed Forces. Mathewson volunteered alongside other players such as Ty Cobb, Branch Rickey, and George Sisler in the Chemical Warfare Service (CWS). The CWS was created in response to Germany’s use of chlorine gas in Belgium, beginning in April 1915. The U.S. had not explored chemical weaponry before, but saw the need to understand chemical warfare. The U.S. Department of War developed the CWS in June 1918, aiming to develop both offensive munitions and defensive equipment.

For Soldiers such as Mathewson and Cobb, their experience with the Army Chemical Warfare Corps was a defining time in their lives. After arriving in France, Mathewson and his fellow Soldiers participated in training activities. During a training drill with live chemical gas, several Soldiers missed hearing the signal to put on their gas masks. Cobb and Mathewson were among those who delayed deploying their protective masks before the gas was set off. As the gas was going off, the men rushed to escape the training room. Cobb recalled that “trying to lead the men out was hopeless… it was each one for himself.” This incident resulted in the death of eight Soldiers and incapacitation of eight more for several days. Cobb escaped with little injury, but Mathewson’s lungs were severely damaged in the accident. After this incident, Mathewson returned to the United States where he rejoined the New York Giants in 1920. Yet, a persistent cough forced him to retire early after the season ended.

In 1921 doctors examined Mathewson and diagnosed him with tuberculosis. Upon receiving this diagnosis, Mathewson, his wife Jane, and their son went to a tuberculosis sanitarium in Saranac Lake, New York. Despite a terminal diagnosis, Mathewson defied the odds and spent two years recovering at the sanitarium. In 1922, Mathewson returned to Major League Baseball. Working as the president for the Boston Braves, Mathewson set out to rebuild the team. Yet, his cough returned in 1925. Mathewson returned to a sanitarium in Saranac Lake, New York to recover, but succumbed to tuberculosis on October 7, 1925. He was buried in Lewisburg, Pennsylvania near the campus of Bucknell University. The University’s football stadium was dedicated to Mathewson in 1989.

The United States’ involvement in World War I required citizens from all walks of life to take up arms and serve in the U.S. Army. Their sacrifices at home allowed the U.S. to strengthen their military forces and fight alongside their allies in Europe. For Soldiers such as Christy Mathewson, their participation in World War I would come at the cost of their lives years after the war ended. Mathewson’s success in Major League Baseball and his willingness to serve his country during World War I reflects the long-standing tradition of the U.S. Army’s Soldier’s to sacrifice their careers, and sometimes their lives, for their country.