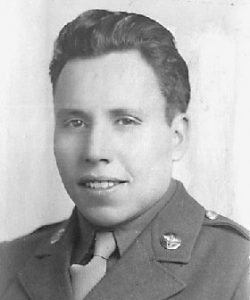 “This We’ll Defend” has been the Army’s motto since 1778. It was first used by the Continental Army as they fought the British and has been ingrained into the minds of American Soldiers ever since. The phrase goes far beyond a person’s time in the armed forces. It becomes a way of life for anyone who has ever had the honor of calling themselves a United States Soldier. “This We’ll Defend” guided the course of Roger Cisneros’ life, whether in the Army decoding enemy messages during World War II or in his post-Army life fighting against racism and discrimination.

Roger Cisneros was born in Questa, New Mexico on January 22, 1924. Growing up on a rural farm, Cisneros displayed such a talent in academics that his parents sent him to school in Albuquerque, over 150 miles from their home. After he graduated from high school, he briefly worked as a riveter on aircraft, which led him to want to become a pilot with the Army Air Forces.

The Army Air Forces (AAF), also known as the Army Air Corps, was established in 1941 in response to the growing need for Army aviators. At its height, there were more than 2.4 million people employed by the AAF and 80,000 aircraft flew more than 2.3 million missions during World War II. When Cisneros volunteered in March 1943, the AAF was no longer in need of pilots. Instead, because of his high academic record, he trained as a cryptographer at Chanute Field, Illinois (later Chanute Air Force Base) before being assigned to the 333d Bombardment Group.

The 333d Bombardment Group served as a B-29 bomber group in the Eighth Army Air Force. Cisneros deployed with them to the South Pacific where he attempted to decode enemy transmissions outside of Okinawa, Japan. These encrypted enemy messages were created using a machine that the Americans called “Purple.”

Japanese encryption was similar to the much more well-known Enigma Machine used by Germany. Before the start of World War II, the Nazis sold an Enigma Machine to Baron Hiroshi Oshima, the Japanese ambassador to Germany. Japan aimed to develop its own encryption machine based on the Enigma. This goal was quickly achieved with the creation of Japan’s encryption machine, code-named “Red.” Japan used “Red” between 1931 and 1936 before the United States’ Signal Intelligence Service broke the code. The following year Japan developed a new machine, which the United States code-named “Purple.”

“Purple” improved on the Enigma Machine by using two typewriters to encode the messages while only needing one person to operate the machines, thus reducing the odds of errors. Its key was changed daily, making it even harder for code breakers to find patterns. The machine’s switchboard contained 25 connections, which could be arranged into six pairs of connections, thus yielding over 70 trillion possible code arrangements. Army cryptographers eventually discovered Purple’s encryption method in 1939, but it took a further two years before they completely broke the code. Even then, it was of the utmost importance that Japan never discover that the U.S. had deciphered its Purple machine.

Cisneros spent 11 months working with other Army cryptographers to decode Japan’s encrypted messages. They worked together in long shifts, sometimes working for 20 hours in a row. Japan used Purple to transmit diplomatic messages to their embassies around the world. It was crucial to intercept these messages so that the United States could track what the enemy was doing and saying. Cisneros completed his deployment in June 1945 and returned to the United States. He stayed in the Army for another ten months before being honorably discharged in the spring of 1946.

Following his Army career, Cisneros attended college on the GI Bill. The Servicemen’s Readjustment Act of 1944, more commonly known as the GI Bill of Rights, was signed into law by President Roosevelt on June 22, 1944. The bill provided World War II veterans with funds for a college education, job training, home, farm, or business loan benefits, and unemployment insurance. By 1947, 49% of college admissions were veterans. When the original GI Bill ended in July 1956, 7.8 million World War II veterans had taken advantage of it.

After graduating with a degree in business from the University of Denver, Cisneros attended the Westminster Law School (now the University of Denver Sturm College of Law) and graduated in 1957. Cisneros decided to practice law because of the discrimination he faced while in the Army and right after he returned home after the war. He remembered how white Soldiers often did not want to sit next to him due to his complexion. After the war, when he moved to Colorado, he was often denied service at restaurants due to their “whites only” rules.

At the start of his career, he was one of only five Latinos practicing law in the state of Colorado. Cisneros quickly proved to be a diligent and talented lawyer. He successfully argued in front of the Supreme Court in 1960 in defense of an underaged client who, he argued, had given the police an involuntary confession. His law career eventually led him into politics and he was elected to the Colorado State Senate in 1964. During his 12 years in the Senate, he focused on fighting racial segregation and discrimination, defending those whom society overlooked, most notably the Latino community, Native Americans, and Vietnam War veterans.

In 1978 Cisneros was appointed to the State of Colorado District Court and served as a judge for the next nine years. Throughout his career, he advocated for the Latino community in Denver and throughout Colorado. He served as the Chairman of the United Latin American Organization, the President of the Latin American Educational Foundation, and founder and Board member of the Mexican American Legal Defense and Education Fund.

Roger Cisneros passed away on September 18, 2017, at the age of 93. Colorado State Minority Leader Lucia Guzman summed up the feelings of all of Colorado when she said that Cisneros was a “…trailblazer for the Colorado Latino community,” and that he “served as a passionate voice for civil rights both in the State Senate and on the bench as a judge.”