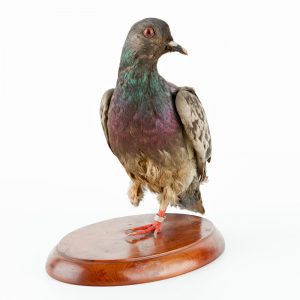 When people think of a Soldier, most would not think of a pigeon. Pigeons played an important role in getting messages between units on the battlefield. Due to the actions of homing pigeon Cher Ami, the 77th division, known as the Lost Battalion, was saved.

Cher Ami, which means “dear friend” in French, was born in 1918. Cher Ami was one of the 600 Army Signal Corps pigeons sent to France to assist with communication on the battlefield. Homing pigeons are known for their ability to find their way home, even from across terrains the pigeon does not know. In 2013, John Hagstrum, a geologist from the United States Geological Survey studied this ability. He discovered that pigeons can hear sounds at lower frequencies, allowing them to create a sound map in their head. Using this sound map, they can navigate around unknown spaces to get “home.” The Army recognized this skill at the beginning of World War I in 1914 when the pigeon corps was first established. The telephone and the radio were still new technologies and not always accessible in the field, so pigeons remained the most reliable sources of communication. Short notes were placed in a tiny canister attached to the pigeon’s leg that they would carry to their destination.

Cher Ami had 12 successful missions—a high success rate among homing pigeons. When the Germans became aware of the Army’s use of pigeons in carrying important information, they began training to shoot them down. Cher Ami had his most dangerous mission during the Meuse-Argonne offensive in 1918. Cher Ami was stationed with the 77th Division, referred to as the “Lost Battalion,” in the Argonne Forest. They found themselves cut off from the rest of the American troops, under heavy bombardment. The battalion was trapped behind German lines and unable to make their position known. Soon, American bombs began falling on the Lost Battalion on October 4, making the situation dire. Since they were out of the reach of the radio signal, using a homing pigeon was their only choice.

American Maj. Charles Whittlesey and his men watched as almost all of their pigeons were shot down by the Germans until they were left with only one pigeon, Cher Ami. Whittlesey attached a note to Cher Ami’s leg, writing, “We are along the road parallel to 276.4. Our own artillery is dropping a barrage directly on us. For heaven’s sake, stop it.” Cher Ami dodged German bullets, giving the Soldiers hope until he was shot through the chest and fell to the ground. Against all odds, he returned to the sky to deliver the message. He flew at record speeds, covering 25 miles in a little less than a half an hour. He arrived at the American base with the message, alive but badly wounded. Army medics were able to save Cher Ami, but he lost his right leg and was permanently blinded. Due to Cher Ami’s trip, the bombardment on the Lost Battalion stopped and 194 men safely returned to American lines. Cher Ami was awarded the Croix de Guerre by the French government to honor bravery on the battlefield. General John Pershing honored him by saying, “There isn’t anything the United States can do too much for this bird.”

Under the care of his trainer, Capt. John Carney, Cher Ami returned to the United States where he spent the rest of his life. Cher Ami died due to his war wounds on June 13, 1919, in Fort Monmouth, New Jersey. His body was preserved and presented to the Smithsonian Institution with honor in 1921.

Cher Ami has traditionally been addressed with female pronouns in accordance with contemporary Signal Corps records marking the bird as a “hen.” However, the Smithsonian addresses Cher Ami as a “cock bird” or male pigeon. In 2021, in honor of the 100th anniversary of Cher Ami’s display at the Smithsonian, the Institution did DNA testing to definitively determine the bird’s biological sex. The DNA settled a century-old mystery when it came back conclusively that Cher Ami was biologically male. Cher Ami is currently on display in the Smithsonian’s National Museum of American History where people can learn about his courageous flight.