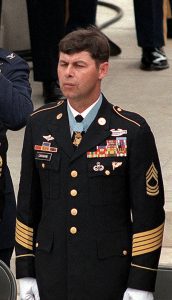 Master Sgt. Jon R. Cavaiani at the state funeral service for the Unknown Serviceman of the Vietnam War, May 28, 1984. National Archives and Records Administration

The Medal of Honor, the nation’s highest award for bravery, has been bestowed on men who defended their friends against overwhelming odds, or who stayed behind to evacuate the wounded, or even those who suffered in prisoner of war camps for years on end. Rarely is the medal given to one man for all three actions. Jon R. Cavaiani was one of those men. An English-born immigrant to the United States, Cavaiani spent his military career in elite units across the U.S. Army and his later life as an advocate for his friends and fellow servicemembers.

Jon R. Cavaiani was born Jon Robert Lemmons on August 2, 1943 in Royston, England, a small town an hour north of London. As a small child, he helped his mother on their farm before the family immigrated to Ballico, California in the early 1950s with his step-father Ugo Cavaiani, from whom he adopted the surname Cavaiani. In Ballico, Cavaiani continued to develop agricultural skills working on a farm with his mother and stepfather. He later worked for a fertilizer company, and gained extensive knowledge in agriculture, a skill that he later employed as a member of the U.S. Army’s Special Forces Advisory Command in Vietnam.

Due to the secretive nature of his service, much of Cavaiani’s record is unknown. In 1969, he attempted to enlist, but failed a medical examination due to his severe allergy to bee stings. Cavaiani displayed the tenacity that would later define his service, searching for, and eventually finding a doctor that offered him a waiver. In late 1969, Cavaiani successfully enlisted in Fresno, California and departed for Special Forces selection. He passed selection in 1970 and deployed to Vietnam as a weapons specialist. Once in Vietnam, Cavaiani joined Task Force 1, Vietnam Training Advisory Group, later known as Military Advisory Command-Vietnam, Studies and Observations Group (MAC-V SOG). Owing in part to his experience in agriculture, Cavaiani’s superiors assigned him as agricultural advisor and veterinarian, a job that left him feeling that “the [Vietnam] war was just passing me by.”

Feeling that he wasn’t doing enough, Cavaiani volunteered as a platoon leader for a small radio relay deep inside enemy lines on Hill 953 in Quang Tri Province in early 1971. The outpost, called “Hickory Hill,” occupied a critical position near the Ho Chi Minh trail and the Vietnam Demilitarized Zone (DMZ). At the time, Hickory Hill was known for its role as a key position during the Battle of Khe Sanh in the 1968 Tet Offensive. When Cavaiani took command, the remaining elements defending the hill amounted to 13 American advisors and 70 Vietnamese defenders.

In the early morning hours of June 4, 1971, enemy forces conducted an attack on Cavaiani’s small detachment with the intent of destroying the entire garrison. North Vietnamese and Viet Cong soldiers assaulted the radio relay station with mortars, rocket-propelled grenades, and machine gun fire. The heavy enemy fire quickly wounded several dozen men as Cavaiani fought desperately to keep the outpost from being overrun. Cavaiani braved enemy machine gun fire as he raced from position to position, completely exposed, to direct the American and South Vietnamese defenders. Cavaiani’s actions on June 4 saved the outpost from annihilation. Late in the afternoon of June 4, three American helicopters descended on the post to evacuate the wounded and provide an avenue of retreat for the remaining defenders. Cavaiani selflessly refused to board the helicopters, choosing instead to stay behind to guide future helicopters into the station the next day. Cavaiani spent that night reinforcing the outpost, foregoing sleep and food to ensure his remaining Soldiers had the equipment and protection necessary to defend the next day until they were all evacuated.

However, the next morning, heavy fog and rain prevented any more evacuation flights. The enemy soldiers seized the opportunity to attack the outnumbered American and Vietnamese defenders. In two waves, the North Vietnamese and Viet Cong attacked the outpost with grenades and machine guns. Cavaiani immediately knew that his position could not withstand the heavy assault and ordered his men to retreat into the surrounding forest. He, however, chose to remain behind, providing covering fire to protect them. In one last valiant effort, Cavaiani picked up a machine gun and stood in open ground, attracting fire away from his comrades and toward himself. As the other Americans escaped, Cavaiani stormed a bunker and occupied it until an enemy grenade wounded him and killed his friend, Sgt. John R. Jones. Enemy forces searched the bunker and captured the wounded Cavaiani.

Prisoner of War pajamas worn by Cavaiani during his captivity in Vietnam.

Cavaiani spent the next two years in Vietnamese captivity. The enemy forces interrogated him at a plantation in North Vietnam for over a year. On December 27, 1972, the Vietnamese transferred the still-wounded Cavaiani to the “Hanoi Hilton,” prisoner of war camp, where Cavaiani remained until March 27, 1973. On that day, Cavaiani remembered seeing a C-141 airplane arriving at Gillam Air Base, where the prisoner exchange took place. Cavaiani called it “the greatest sight in the world” when he first saw the approaching aircraft. Weighing a little more than half his pre-captivity weight, Cavaiani limped toward the aircraft until an Air Force crew chief grabbed him, and his “legs went to rubber.”

Despite significant wounds from the battle of Hickory Hill and his subsequent captivity, Cavaiani continued to serve in the Special Forces community. He served on the Allied Staff in West Berlin until 1980, before transferring to 10th and 11th Special Forces Groups at Fort Devens, Massachusetts and Fort Meade, Maryland, respectively. Cavaiani promoted to the rank of sergeant major in 1989 and retired from active duty in 1990, after teaching future Army leaders at the University of California, Davis. 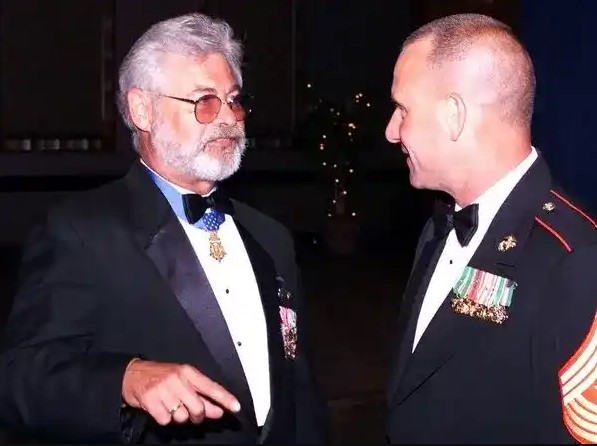 Jon Cavaiani wearing his Medal of Honor, 2004. Department of Defense

Upon retirement, Cavaiani continued to look after his Soldiers. Forty years after the Battle of Hickory Hill, Cavaiani and others returned to the outpost to find the remains of their fallen comrades. His extensive knowledge of the area helped search teams recover the remains of Cavaiani’s friend, Sgt. Jones, who is now buried in Arlington National Cemetery. On July 29, 2014, Cavaiani passed away. He is now buried near Jones and other fallen Vietnam veterans at Arlington National Cemetery, Section 60.

President Gerald Ford presented Jon Cavaiani with the Medal of Honor for his actions at Hickory Hill and for his bravery throughout two years of captivity on December 12, 1974. The U.S. Army Special Forces Regiment named Cavaiani a Distinguished Member of the Regiment in 2011.