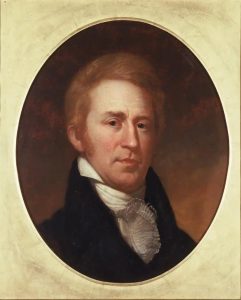 William Clark rose to prominence through his famous Western expedition with his partner, Meriweather Lewis. Together they explored lands never before seen by Americans and gathered information on geography, plants, animals, and Indigenous cultures. Clark’s experience on the expedition gave him the skills for a successful leadership career on the western frontier. Though imperfect, Clark’s contributions to mapmaking, scientific exploration, and Indian relations resulted in a successful expedition, influenced the trajectory of the U.S. occupation of the frontier, and shaped the future of the United States.

Born August 1, 1770, in the colony of Virginia, William Clark was one of John and Ann Clark’s ten children. The Clarks were planters who owned several modest estates, including a number of enslaved people. William Clark did not have a formal education. Like many of his fellow Virginians, he was schooled at home in topics important to landowning gentlemen, such as mathematics, geography, farming, and horsemanship. Though he lacked a classical education (and displayed shortcomings when it came to spelling), Clark was curious, thorough, and dedicated to the pursuit of knowledge.

Following the Revolutionary War, the Clark family relocated to a plantation in Kentucky. Clark served in the Kentucky militia at age 19 in conflicts against American Indians. In 1792 President George Washington commissioned him a lieutenant in the U.S. Army infantry. He took part in the Battle of Fallen Timbers and commanded the elite “Chosen Rifle Company.” During his time in command, Clark met his future expedition partner, Meriwether Lewis. Their initial service together was brief, however. Clark resigned from military service in 1795 due to his health, lack of recognition from Army leadership, and his desire to improve his financial prospects. Unfortunately, his efforts as a Soldier, farmer, and businessman resulted in little gains. Clark faced financial ruin after attempts to help family members with their financial issues. In 1803, his luck changed when he received a letter from his old friend Lewis recruiting Clark to assist him on an expedition to the west.

After the United States acquired the 828,000 square mile territory of Louisiana from the French in 1803, President Thomas Jefferson commissioned an expedition to explore the area. So little was known about the region that Jefferson expected woolly mammoths to roam the distant land. His main objectives for the expedition were to map the new territory, find a Northwest Passage by water to the Pacific Ocean, and establish American sovereignty over the region. Secondary objectives included studying the geography, animals, and plants of the area as well as establishing trade relations with American Indians. Jefferson looked to the Army to complete this mission because Soldiers possessed the necessary skills, discipline, and training. Clark’s leadership qualities, agreeable ways, and steady and reliable habits made him an asset to the mission. He accepted the offer and prepared for the trip by researching the best dietary practices, hygiene, and medical treatments for long-distance frontier travel. He also recruited additional men for the voyage.

In May 1804, a specially established unit of the U.S. Army, commonly known as the Corps of Discovery, left Camp Dubois in Illinois. They set sail up the Missouri River led by co-commanders Lewis and Clark. Although Clark was a second lieutenant, Lewis insisted on referring to Clark as a captain and recognized him as his co-commander. Their men never knew the difference in their ranks. The explorers endured rugged terrain, harsh climates, and survived illnesses, boils, injuries, and animal bites. On top of navigating these rough conditions the voyagers still had to address Jefferson’s objectives for the expedition. Clark served as the corps’ primary mapmaker and record keeper. He dedicated much of his time to drawing maps of their 8,000-mile voyage based off first-hand experience, American Indian informants, and speculation. He produced several documents summarizing the rivers, mountains, and prairies they navigated. Together, Clark and Lewis recorded the first scientific descriptions of some 300 animal and plant species. They even sent unfamiliar specimens back east, such as a prairie dog and a magpie.

During their two-and-a-half-year expedition, the Corps of Discovery encountered more than two dozen Native tribes. The Corps attempted to establish good relations with American Indians. They presented gifts and promised future trade with the U.S. government, but they also sought to institute American sovereignty. They used intimidation to a certain extent by demonstrating technologies such as an air gun to show off their military prowess. Clark was a skillful negotiator due to his sense of composure and restraint. Over time, he developed an appreciation for the diversity of Indigenous cultures they encountered. He also achieved favor with the tribes by offering medical treatments which he leveraged to receive much needed supplies. He devoted time and effort to charting and classifying 53 Missouri River tribes. However, his classifications underestimated the complex nature of the Indigenous cultures. Without the help of American Indian tribes, and individuals such as the Shoshone woman Sacagawea, it is doubtful that the Corps of Discovery would have completed their expedition.

At the conclusion of the expedition in 1806, Lewis and Clark were considered national heroes. They received extra pay and 1,600 acres of land from Congress. President Jefferson appointed Clark brigadier general of the Louisiana Territory militia and the federal agent of Indigenous people’s affairs in the West. He moved to St. Louis to fulfill these roles after marrying Julia Hancock of Virginia in 1808, with whom he had five children. Julia died in 1820 and Clark went on to marry her cousin, Harriet Radford, and together they had three children. He was appointed to several positions on the frontier, serving as governor of Missouri Territory from 1813-20, superintendent of Indian Affairs from 1822-38, and surveyor general of Illinois, Missouri, and the Territory of Arkansas from 1824-25.

Indian diplomacy occupied much of Clark’s time, and he was seen as the most knowledgeable and prominent official in Native American affairs west of the Mississippi. Personally, Clark believed assimilation was the best course of action for Indigenous peoples. Many frontier settlers criticized Clark for being too compassionate toward American Indians. In the end, he agreed with America’s expansionist agenda and committed himself to relocation of Native populations at the behest of the American government. He facilitated the passing of millions of acres of land from American Indian to U.S. ownership.

William Clark lived in St. Louis until he died in 1838 at the age of 68. He is remembered for his contributions to the Corps of Discovery expedition, such as his maps that served as the most accurate guides of the western territories until the 1840s, and his ethnographic studies of Indigenous peoples. The U.S. government established forts and trading posts near two-thirds of the sites suggested by Clark for achieving and maintaining U.S. control of the frontier. His ability to negotiate with American Indian tribes facilitated America’s expansions and settlements out West as he arranged one-tenth of all ratified treaties between the United States and American Indians. In 2001, President Bill Clinton posthumously promoted William Clark to the rank of captain in the U.S. Army, honoring his service and recognizing his leadership on the historic Lewis and Clark expedition.