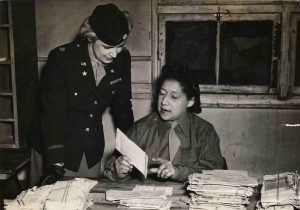 Alyce Dixon (right) with her superior officer. Department of Defense.

When the Cpl. Alyce Dixon enlisted in the Army in 1943, she did not realize that it would set the stage for a long career of government service. As a member of the 6888th Central Postal Directory Battalion, she was one of the first Black women in the Army. The 6888 was the only all-Black, all-female unit sent overseas during World War II.

Alice Lillian Ellis was born in Boston, Massachusetts on September 11, 1907. She was the third of nine children. Ellis was determined and independent, even from a young age. When she was 16 years old, she watched a film with the actress Alyce Mills. When she saw the credits she thought “I liked that spelling, I thought it was pretty and a ‘y’ and an ‘i’ are the same, so I changed it.” Even against her mother’s wishes, she stuck to the spelling change.

When Ellis was a senior in high school, she moved to Washington, D.C. to live with her grandmother. She graduated from Dunbar High School in 1925 and then enrolled in Howard University. Her college career was short-lived, though, after overhearing her father’s financial concerns. Dixon left school and took a job at Lincoln Theatre, the highlight of Washington’s “Black Broadway.” She worked as a secretary making $15 a week (about $225 in 2021), sending the majority home to her family. She remembers living off of seven dollars a week (about $100 in 2021), later joking that today “they can’t even get a good sandwich for $7!” When she was 23 she married George Dixon. However, she divorced her husband after he found out she was sending money back to her family and put her on a strict allowance. In 1943, the same year as the creation of the Women’s Auxiliary Army Corps (WAC), Dixon noticed white spots on her back that concerned her. She joined the WACs in April of that year, hoping that Army doctors “knew everything” and could cure her condition. Dixon was later diagnosed with vitiligo, a skin condition that causes depigmentation. She remembered an Army doctor telling her, “Don’t worry about it. One day you’re going to be white.” Dixon left the appointment in tears. For the rest of her life, Dixon never understood why she was the only member of her family with the condition.

Dixon enjoyed her role in the Army because it allowed her the opportunity to travel. When Dixon first enlisted, she was stationed at Fort Sam Houston, Texas. While there, she began writing the correspondence for a general. Her work for him was so good, he put her on the men’s roster so he could give her a rank.

Two years after the creation of the WACs, Army officials began to note that the lack of mail from home harmed troop morale. The Army advertised the need for 1,000 women to serve overseas organizing and distributing the mail. Eleanor Roosevelt, Dr. Mary McLeod Bethune, and civil rights organizations successfully advocated for Black women to be allowed to join as the WACs. After multiple white WAC units were sent abroad, organizations at home began working for Black WAC units to be allowed to serve overseas as well. The war department approved this action in November 1944. This call led 817 Black women, including Dixon, to join the 6888th Central Postal Division. The women of the so-called “six-triple-eight” trained in Fort Oglethorpe, Georgia. There, they prepared for their mission abroad by learning how to identify enemy planes, ships, and weapons; climb ropes; board and evacuate ships; and do long marches with rucksacks. When they deployed to London in 1945, they were ready for anything.

When Dixon and the 6888th arrived in Birmingham, England, they were discouraged by the sheer amount of mail in the warehouses but were determined to get to work. Dixon remembered, “The general said it would take six months to clear up the mail. You know, we cleared it up in three? We worked eight hours a day, every day—all of us—and we cleaned it up.” With the motto “No Mail, No Morale,” the women of the 6888th took their job to raise troop morale seriously. They set up a cart system to organize the mail based on destination. This organization system made it easier for Army Postal Offices to distribute the letters.

The job of the 6888th was difficult for many reasons. Dixon said “A lot of people…sent the mail to ‘Junior, U.S. Army,’ ‘Buster, U.S. Army.’ We knew every veteran had a number…and we found them. It was very difficult at first, but we found every one of them.” They also had the emotional job of sending letters to deceased Soldiers back to their families and loved ones. Once the 6888th managed to organize and distribute all the mail in the Birmingham facilities, they were reassigned to Rouen, France. It is believed that the WACs handled approximately 9 billion pieces of mail throughout the course of the war. While on leave, Dixon traveled around Europe, visiting Paris, Florence, and Rome, as well as some cities in Germany. In December 1945, Dixon left the Army.

After World War II, Dixon continued her life of civil service. She took a job at the Pentagon where she worked her way up to a requisitions position. Dixon reminisced that she “bought everything from pencils to airplanes, I became a good buyer.” She had a good relationship with a majority of the salespeople due to her quick humor and love of jokes. Dixon retired in 1972 when she was 65 years old. In retirement, Dixon spent her time traveling, visiting Bermuda, Kenya, and returning to Europe.

Dixon loved her independence. She lived on her own until 2000 when she moved into the Community Living Center at the Washington, D.C. VA Medical Center at the age of 93. She was the oldest resident in the center and enjoyed recounting stories with her visitors. She spoke of her experiences meeting multiple presidents, first ladies, and other influential figures. In the Medical Center, she was called the “Queen Bee” since she always came out of her room with her makeup done and stylishly dressed. She would say “I tell everyone to dress nice for yourself and you’ll feel better, even if you don’t feel good…No one has to tell you that you look good…do it for yourself.” Dixon passed away on January 27, 2016, at the age of 108, the oldest living female World War II Veteran. She credited her long life to sharing: “I just believe in sharing and giving. If you have a little bit of something and someone else needs it, share.”