How can the National Army Museum support your National History Day project?

Communication is more than inventions. It is how words, thoughts, and ideas are exchanged throughout history. The National Army Museum has several suggestions for projects that support the theme. Explore how U.S. Army history and Soldiers’ stories explain Communication in History.

The U.S. Army has improved upon or created communication devices that are used by Americans every day.

How have U.S. Army communication innovations impacted American society?
How have they changed the ways we communicate with each other?


Satellites
The space program began in the U.S. Army and led to the development of new innovations that changed the way we communicate. Explorer 1, the first satellite, was launched by the U.S. Army in 1958, and since then satellite use has expanded.

In fact, satellite technology continues to be a major part of modern life, in communication, global positioning systems, earth observation, and weather forecasting.

How has satellite technology become a part of modern life?
How has this technology changed the way people communicate?
What role has the Army played in developing communications technology and why?

2. Raines, Rebecca Robbins. Getting the Message Through: A Branch History of the U.S. Army Signal Corps. Washington, DC: Center of Military History, 1996. https://history.army.mil/books/30-17/Front.htm

The telephone transformed the way people communicated with one another. It created a whole new industry that gave women new opportunities to participate in the work force as telephone operators.

The demand for fast and reliable communication was paralleled in the U.S. Army. During World War I, 200 women served as contract telephone operators in France as part of the U.S. Army Signal Corps. The U.S. Army recruited experienced operators who were also bilingual in French and English. Nicknamed “Hello Girls,” their fluency in English and Frenchy kept communication open among Soldiers on the frontlines.

How did new technology, like the telephone, change battlefield communication?
What factors led the Army to recruit female telephone operators during World War I?

6. Raines, Rebecca Robbins. Getting the Message Through: A Branch History of the U.S. Army Signal Corps. Washington, DC: Center of Military History, 1996. https://history.army.mil/books/30-17/Front.htm

Homing pigeons, known for their swiftness and determination returning to their home station, were used by the U.S. Army to send messages when lines of communication were unreliable. These pigeons carried important messages that saved lives.

Pigeon Mocker served with the American Expeditionary Forces in World War I, delivering intelligence that was inaccessible to commanders in the field. During one mission, Mocker was wounded, losing his right eye and part of his cranium. Mocker was declared a “hero pigeon” and awarded the French Croix de Guerre medal among others due to his heroic actions. 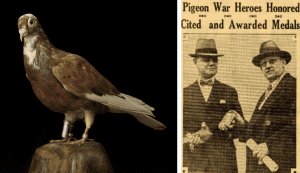 How have animals, like Mocker, been used to aid communication?
What factors led the U.S. Army to use Pigeons as messengers?

5. Raines, Rebecca Robbins. Getting the Message Through: A Branch History of the U.S. Army Signal Corps. Washington, DC: Center of Military History, 1996. https://history.army.mil/books/30-17/Front.htm