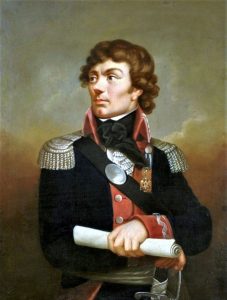 Polish immigrant, engineer, and revolutionary Thaddeus Kosciuszko aided the Continental Army before returning to Eastern Europe in an attempt to sow revolution there. His fight for unqualified liberty across the world inspired Thomas Jefferson to call him, “as pure a son of liberty as I have ever known.”

Kosciuszko committed his life to democratic ideals from a young age. Born Andrzej Tadeusz Bonaventura Kościuszko in 1746 into a noble Polish family, the young man grew up in modern Belarus. He studied John Locke and other liberal philosophers before attending a military academy in Warsaw. Kosciuszko advanced to the rank of captain in the Polish-Lithuanian Commonwealth Army, but left Poland for France in 1768 upon the outbreak of a civil war. He applied to several French military academies, but was only accepted into the Royal Academy of Painting and Sculpture in Paris. It was during his education at the Royal Academy that Kosciuszko developed his skills in civil engineering and became particularly interested in military construction. After a love affair ended in a thwarted elopement, Kosciuszko decided to go abroad.

In 1775, Kosciuszko chose to join the American cause, a choice that altered the course of his life. A revolutionary at heart, Kosciusko was eager to participate in a fight for liberty. He arrived in Philadelphia in August, seeking out Benjamin Franklin to present his application for service as an officer in the Continental Army. The American forces lacked experienced civil engineers. The Second Continental Congress approved his application to voluntarily serve under Franklin. Kosciuszko spent his first few months with the Army fortifying Fort Billingsport to protect Philadelphia from advancing British troops. Impressed with his work, Congress inducted Kosciuszko as a colonel of engineers in the Continental Army.

The Continental Army’s reliance on Kosciuszko’s expertise began at the Siege of Fort Ticonderoga in 1777. Kosciuszko initial advice to Brig. Gen. Arthur St. Clair on fortifying Mount Defiance, overlooking the fort, went unfollowed. During the battle, however, British forces attacked using the strategy predicted by Kosciuszko, leading to St. Clair’s withdrawal from Fort Ticonderoga. Later that year, a more trusted Kosciuszko designed the defensive barriers along the Hudson River. The barrier successfully held British troops back during the Battles of Saratoga. British Gen. John Burgoyne’s surrender at Saratoga inspired France’s King Louis XVI to support the American cause, changing the trajectory of the war. While Maj. Gen. Horatio Gates received much of the credit for the victory, he commended Kosciuszko, writing in a letter, “a young Polish Engineer was skillful enough to select for my encampment [a good location and defenses]”. Kosciuszko spent the final years of the war defending the Carolinas as chief engineer and later returning to his military roots as a field commander. By the end of the war, Congress promoted Kosciuszko to the rank of brigadier general and gave him 500 acres of land as partial compensation.

Inspired by the success of the American Revolution, Kosciuszko returned to Eastern Europe in 1784 hoping to assist in another democratic uprising. Kosciuszko served in the Polish Army for several years during a period of unrest between the Polish-Lithuanian Commonwealth and the Russian Empire led by Empress Catherine the Great. The conflict resulted in the Second Partition of Poland in 1792, halting some of the democratic progress made by the Polish government. In response, Kosciuszko led an uprising as the self-appointed commander in chief of Poland. The uprising lasted seven months before Catherine captured and imprisoned Kosciuszko. He was not released until after her death in 1796, and he returned to the United States the next year.

In the United States, Kosciuszko extended his fight for liberty into his personal life. During his time in the Continental Army, Kosciuszko built what would become a lifelong relationship with Thomas Jefferson. Upon Kosciuszko’s return to the United States, he named Jefferson the executor of his will, and made several requests of him. Kosciuszko’s deep belief in liberty extended to abolition. Throughout his life, he employed Black aides, whom he paid a fair wage and treated as equals. He strongly disapproved of the institution of slavery. He wished for Jefferson, a slaveholder himself, to use his estate to purchase the freedom and education of enslaved peoples. Jefferson agreed to use the money to free some of his own enslaved workers, as well. Kosciuszko’s wish for his legacy was to, “[give] them liberty in my name”.

Kosciuszko returned to Europe once more in 1798. He lived the rest of his life in Paris and passed away there in 1817. Instead of executing Kosciuszko’s will, however, Jefferson went to court requesting a new executor be chosen, citing worsening health. Upon Jefferson’s death in 1826, those enslaved by him were not freed. Kosciuszko’s will remained in the American court system until 1856, when the U.S. Supreme Court deemed it invalid. While Kosciuszko’s wishes were not fulfilled, his memory as a warrior for liberty indeed lived on. He is honored for his values and dedication in memorials across the world, from the Thaddeus Kosciuszko National Memorial at his Philadelphia home and Polish Air Force units bearing his name to Mount Kosciuszko in Australia.