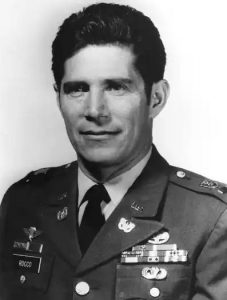 Louis Rocco showed that one decision can change the course of a person’s life for the better. As a teen, he was involved in gangs and stole to provide for his family. By the end of his life, he was a Vietnam War veteran with a Medal of Honor, established resources in his local community to support veterans, and beloved by all who knew him. As a Soldier, he exemplified selfless service and the duty of an Army medic. As a citizen, he dedicated his life to helping others.

Louis Richard Rocco was born on November 19, 1938 in Albuquerque, New Mexico and grew up in Los Angeles. He was one of nine siblings, with a Mexican American mother and Italian American father. Rocco did not have an easy life growing up–the family lived in poverty, and Rocco was often in trouble with the law. He joined a local gang and stole food to feed his family. At the age of 16, Rocco dropped out of school and soon arrested for armed robbery. His day in court changed the rest of life. During a break and perhaps seeking to redirect his life, Rocco entered an Army recruiting office and met recruiting officer Sgt. Martinez, who returned to the courtroom with Rocco to speak with the judge. He struck a deal: if Rocco returned to school and separated from his gang, he would receive a suspended sentence and could join the Army when he turned 17. Rocco agreed, and enlisted in 1955.

Rocco attended basic combat infantry training at Fort Ord, California. He then trained at the basic medical school at Fort Bragg, North Carolina. His first assignment was in West Germany; there he received his high school general equivalency diploma. Rocco then served in Vietnam with the Military Assistance Command-Vietnam (MAC-V) in the South Vietnam 7th Division from November 1965 through 1966. He returned for a second tour in November 1969 with the South Vietnamese Airborne Division, MAC-V Advisory Team 162. Rocco saw the most intense combat during this second tour. On May 20, 1970, he joined a medical evacuation team to rescue wounded Soldiers near the village of Katum on the border of South Vietnam and Cambodia. As their helicopter attempted to land in an active combat zone, the pilot was shot in the leg and the helicopter went down.

Rocco suffered an injured wrist, hip, and a bruised back in the crash. Despite his own injuries, he began to pull three injured members of his team from the burning helicopter, sustaining burns to his already injured body. One by one, Rocco moved the injured Soldiers from the crash site to an area near the South Vietnamese Army perimeter 20 yards away. He provided first aid until he fell unconscious. The Soldiers endured their injuries with no medicine or equipment for the next day while airstrikes attempted to deter North Vietnamese attacks. Two American helicopters were shot down attempting to evacuate them on the second day. A third attempt by Cobra helicopters successfully evacuated the injured Soldiers to a Saigon hospital.

In the face of intense fire, Rocco placed the lives of his fellow Army Soldiers before his own safety, saving the lives of his comrades. For these actions, President Gerald R. Ford awarded Rocco the Medal of Honor on December 12, 1974. He was also honored with the Combat Medical Badge, Purple Heart, and Bronze Star.

Rocco continued his education following his Vietnam service, obtaining an associate degree in business from the University of New Mexico. He then trained as a physician assistant (PA) with the first class of the U.S. Army’s Academy of Health Sciences (now the U.S. Army Medical Center of Excellence) at Fort Sam Houston, Texas, graduating with the rank of warrant officer in 1973. While working in an emergency room at the Veterans Affairs Hospital in Albuquerque, New Mexico, Rocco remembered seeing first-hand the poor treatment of fellow Vietnam veterans and the effects of post-traumatic stress disorder (PTSD). His own struggles with PTSD ended three marriages throughout his Army career. Sharing these experiences with fellow veterans, including his younger brother, sparked a deep compassion in Rocco.

After 22 years of military service, Rocco retired from the Army with the rank of chief warrant officer two in 1978 and settled in his home state of New Mexico. He began a post-retirement career of helping veterans recover, both physically and mentally, from the effects of combat. Shortly after his retirement from the Army, he founded the Vietnam Veterans of New Mexico, the first organization for Vietnam veterans in the area. He later served as director of the Veterans Service Commission in New Mexico. Rocco continued to establish resources for veterans in the community, including a homeless shelter, nursing home, and Veterans’ Center to provide counseling. He also advocated for tuition waivers for veterans attending state colleges.

Rocco returned to military service in 1991, volunteering for active duty during Operation Desert Storm. At Fort Sam Houston, Rocco recruited PAs back to service and trained medics. He returned to retirement six months later when the conflict subsided. He then continued his community outreach with the Veterans Service Commission, speaking to New Mexico school children about the effects of drug addiction. Around this time, he met his fourth wife, Maria Chavez Schneider, who was also active in community outreach and serving as the assistant director of the New Mexico AIDS Services. After marrying, the couple lived in Mexico for a few years, but ultimately settled in Texas in 1998. In 2000, he was appointed the State Deputy Director for Texas, supporting youth programs focused on public safety and security. During his term he promoted Veterans Against Drugs, a nationwide outreach program focused on educating young Americans on the harmful effects of illegal drug use.

Throughout his military career and retirement, Rocco exemplified selfless service and community outreach. Rocco’s family and friends remember him as humble, rarely sharing that he had received the Medal of Honor. His own struggles inspired him to help others find the direction the Army offered him and establish resources to support veterans and young people.

Rocco died on October 31, 2002 after a 10-month battle with lung cancer. He is buried at the Fort Sam Houston National Cemetery. Over the course of his four marriages he had three children and many grandchildren, one of whom, Sgt. Dell Rocco, joined the Army about a year after his grandfather’s passing. Chief Warrant Officer 2 Rocco is honored by the city of Albuquerque with the dedication of the Louis Richard Rocco Memorial Park next to the Westside Community Center.