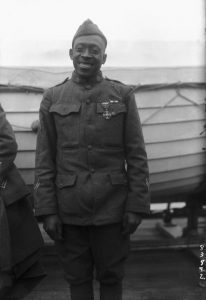 Sgt. Henry Johnson’s actions on the night of May 15, 1918 earned him the nickname “Black Death.” Defending Allied lines, he saved a fellow Soldier from capture and prevented a German raid from reaching his French allies. However, the United States refused to recognize Johnson’s extraordinary actions. Johnson, along with hundreds of thousands of other African Americans to serve during World War I, was denied the same treatment as white Soldiers. Yet, Johnson courageously served the United States, displaying valor and determination above and beyond the call of duty.

Born in Winston-Salem, North Carolina, William Henry Johnson moved to New York state as a teenager. Early in life, he worked as a chauffeur, soda mixer, laborer, and porter at Albany’s Union Station. Many of the opportunities enjoyed by white Americans were denied to Johnson but that did not stop him from answering the call of duty during World War I. Just two months after the United States entered the war, the 5-foot-4-inch, 130 pound Johnson enlisted in the Army on June 5, 1917. He was assigned as a private to Company C, 15th New York Infantry Regiment, a segregated African American unit with some white officers. Johnson trained for months until the unit deployed to France in December 1917. When they deployed to Europe, the regiment was renamed the 369th Infantry Regiment, part of the segregated 93d Infantry Division.

Upon arrival, Army leadership assigned the 93d to non-combat roles. They performed manual labor, such as unloading supplies from ships and digging latrines. Many white Soldiers treated their Black comrades poorly, with some refusing to be stationed in the same trenches with African Americans. Despite a desire to keep American units together, Maj. Gen. John J. Pershing detached the 369th Infantry to serve with the French on April 8, 1918. While the U.S. Army kept its forces segregated, the French chose to integrate their forces with Black soldiers from their empire. As a result, Johnson and the 369th deployed to the front alongside white French soldiers who generally treated them better than many white American Soldiers. Equipped with French helmets, rifles, and taught enough French to understand orders, the 369th deployed to a position near the Argonne Forest integrated with the French 161st division.

For the first few weeks on the frontlines, the 369th saw little combat. On the night of May 15, Johnson participated in some of the regiment’s first combat. Johnson and his comrade, Pvt. Needham Roberts, were on a night patrol near a bridge they were guarding. At the same time, a group of German soldiers prepared to launch a surprise raid on the French lines. Enemy soldiers made their way across the battlefield towards Johnson and Roberts’ position. The sound of wire cutters alerted them to the enemy’s presence. Johnson opened a grenade box and ordered Roberts to run back and warn their French allies. Johnson threw grenades at the attacking enemy and they returned fire. Shrapnel from enemy grenades wounded Roberts, who had returned to help Johnson. With Roberts wounded, Johnson threw all of his grenades but the enemy still advanced.

Wounded by enemy fire, Johnson returned fire until he ran out of ammunition. He engaged the enemy in hand-to-hand combat, using his rifle like a club. As he noticed the enemy attempting to capture Roberts, Johnson drew his last remaining weapon, his bolo knife. Johnson used his knife to cut down two enemy soldiers before being shot again. This still didn’t stop Johnson. He continued to lunge at the Germans, trying to protect Roberts. His frantic attacks broke the German morale and the enemy raiding party retreated. Johnson stopped the enemy raid from approaching the main French line and from capturing Roberts. Killing four German troops and wounding 10 to 20 others, Johnson suffered 21 wounds in the process.

For their heroism, Johnson and Roberts were among the first Americans awarded the French Croix de Guerre, France’s highest award for valor. He became one of America’s heroes in World War I when word of his feat was publicized in the United States. From that point on, Johnson was known as “Black Death.” When describing the event, he maintained that he was not a hero, stating, “There wasn’t anything so fine about it. Just fought for my life. A rabbit would have done that.” After Allied victory in World War I, Johnson and the 369th, known by then as the “Harlem Hellfighters” for their tenacity in combat, were welcomed as heroes. Johnson led the 369th victory parade through New York City and former President Theodore Roosevelt named him one of the five bravest Americans to serve in World War I.

Despite this warm welcome, the Army denied Johnson recognition for his actions. His discharge records did not mention his debilitating injuries and the Army did not award him with a Purple Heart. Denied a disability allowance, he returned home to Albany, New York, and resumed his job as porter at the train station. Unable to hold a steady job due to his injuries and lack of education, Johnson struggled until he died in 1929 at the age of 32 of myocarditis.

Johnson’s meritorious service in the face prejudice and discrimination contributed to the Allied victory in World War I. Yet, recognition for that service did not come quickly. Ninety-seven years after his combat service, the Department of Defense reviewed Johnson’s records and recommended him for the Medal of Honor. President Barack Obama presented his award in 2015, stating, “The least we can do is to say, ‘We know who you are, we know what you did for us. We are forever grateful.’”

Classroom and Research Materials:
National Endowment for the Humanities. “African-American Soldiers in World War I.” Last modified May 20, 2019. https://edsitement.neh.gov/lesson-plans/african-american-soldiers-world-war-i-92nd-and-93rd-divisions.