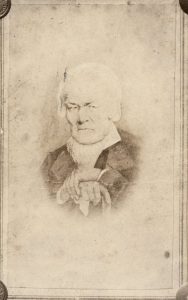 Early in life, few would have described Sgt. Patrick Gass as a notable writer. Instead, they would have praised him for his skills in the wilderness and carpentry. However, his written work lived on much longer than anything he built. Gass served 20 years in the Army, fighting in the War of 1812 and serving on the frontier. An accomplished carpenter and explorer, he participated in the Lewis and Clark expedition and documented the entire trip. His journal from the journey was the first published account of the expedition and coined the name, “Corps of Discovery.”

Patrick McLene Gass was born in Fall Springs, Pennsylvania, in June 1771, but did not stay there long. Moving often, his family finally settled in Maryland in 1777. However, Gass went to live with his grandfather for several years to receive an education. But education was the last thing on his mind and instead, he spent much of his youth traveling and adventuring in the countryside. As a result, Gass did not learn to fully read or write until he was an adult. Despite his limited education he documented one of the most extraordinary adventures in U.S. history.

In 1792, Gass joined the Army to fight against Native Americans in the Northwest under Maj. Gen. Anthony Wayne. He served under Wayne for two years until 1794, when Gass left the Army to learn another skill he became famous for, carpentry. He spent two years as an apprentice in Mercersburg, Pennsylvania, and worked on various projects in the area until 1799. He rejoined the Army in 1799, but the Army discharged him shortly after the threat of war with France faded. After his discharge, Gass reenlisted as soon as he could in May 1801. He joined Capt. Russel Bissell’s company at Kaskaskia, Illinois, and served as a carpenter, helping build winter quarters and repairing the fort.

In 1803, President Thomas Jefferson purchased the Louisiana Territory from France and ordered an expedition to explore the newly acquired land. Jefferson chose Capt. Meriwether Lewis to lead a group of Soldiers into the territory and Lewis appointed former lieutenant William Clark as his second in command. The Army ordered Bissell to provide eight men for the upcoming expedition. Gass volunteered, knowing the adventures and opportunities it offered but Bissell denied it. He wanted to keep his skilled carpenter around. Gass, however, went directly to Lewis who convinced Bissell to let him join the mission.

At the start of the expedition, Gass was a private and used his outdoor and carpentry skills to aid the mission. Following the death of Sgt. Charles Floyd, in August 1804, the men elected Gass to replace him as sergeant. His skills continued to be put to use as he oversaw the building of the winter camps at Camp Dubois (Illinois), Fort Mandan (North Dakota), and Fort Clatsop (Oregon). He also hewed dugout canoes at Mandan (North Dakota) and Canoe Camp (Idaho). Gass then fashioned wagons to portage the canoes 18 miles overland around a series of falls on the Missouri River.

With his promotion to sergeant, Gass was tasked to keep a detailed journal during the entire trip. He logged what the expedition faced each day and how they made their trek across the country. When the expedition returned in 1806, his friends encouraged him to turn his notes into a book documenting the journey. This was no easy task due to Gass’s poor writing and meager vocabulary. A schoolteacher, David McKeehan, came to his aid and transcribed his notes into a formal document. Gass’s telling of the expedition was published in 1807, titled “Journal of the Voyages and Travels of the Corps of Discovery.” His version of the expedition was the first published account of the journey west and coined the term “Corps of Discovery.”

After publishing his journal, Gass returned to the military and served as assistant commissary at Kaskaskia, Illinois, until war with Britain broke out in June 1812. Gass fought in several battles of the War of 1812, including the Battle of Lundy’s Lane, where a splinter from a falling tree blinded him in one eye. He only left service for two years before returning in 1814 to protect the United States Northern Border against a British invasion near Niagara Falls. That was Gass’ last service in the Army. He received an honorable discharge from the Army in 1815 and worked various jobs over the next several years. In 1829, he met and married Maria Hamilton while building a house for her father. Gass raised their five children himself after Maria died in 1846, and often struggled to feed and house his family.

Gass was the last surviving member of the “Corps of Discovery” when he died at the age of 98 in 1870. A dedicated Soldier, Gass served over a dozen years in the Army until his battle wounds forced early retirement. His skill in carpentry contributed to the success of the Lewis and Clark Expedition. Though a poor writer, his tale of the journey out west tied his name to the expedition forever. Despite struggles later in life, Gass’s sense of adventure and patriotism never left him.