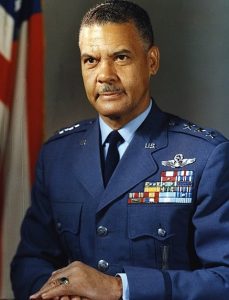 Lt. Gen. Benjamin O. Davis Jr. played a vital role in opening up the skies and the entire military for Black Soldiers. Davis spent more than 35 years in the military, breaking barriers at every level. He served all over the world, fighting against segregation on and off the battlefield. His service showed that Black Soldiers were just as brave and capable as white Soldiers. Davis helped integrate the Air Force, serving as their first Black general and opening up opportunities for African Americans to follow in his footsteps.

Born in Washington, D.C. on December 18, 1912, to Elnora and Benjamin O. Davis Sr., Benjamin Oliver Davis Jr. grew up in a military family. At the time, Davis Sr. was one of only two Black officers in the Army. Davis Sr. taught his son about the world and Army from an early age. As part of a military family, Davis Jr. moved frequently, discovering the harsh realities Black Americans faced both in the military and everyday life. He wanted to play a part in fighting segregation and decided he could best do that through military service. Davis graduated from Central High School in Cleveland, Ohio, in 1929, with hopes of becoming a pilot. He attended college at the University of Chicago until he received a recommendation to attend the United States Military Academy at West Point from Rep. Oscar S. De Priest, the only Black Congressman at the time.

Davis entered West Point in 1932 and immediately faced discrimination and racism. He was the first Black cadet to attend West Point in the 20th century and only the fourth to ever attend. During his four years at the academy, he never had a roommate, ate his meals in silence, and was only spoken to if needed. Despite attempts to discourage and belittle him, Davis graduated from West Point in 1936 in the top 20% of his class. However, since there were no Black flying units, Davis became a second lieutenant in the infantry and was assigned to the 24th Regiment at Fort Benning, Georgia.

He stayed at Fort Benning for two years, where he graduated from infantry school. Instead of joining another infantry regiment, he went to the Tuskegee Institute in Alabama to train reserve officers. In 1941, he finally got the opportunity to fly. His father, at that point Brig. Gen. Davis Sr., helped convince President Franklin Roosevelt to create an all-Black unit in the Army Air Forces. The Army wanted a Black West Point graduate to command the squadron, and, at the time, Davis Jr. was the only active Black academy graduate. In March 1942, Davis earned his wings and fulfilled his dream of becoming a pilot. Within a year, he commanded a unit of 1,000 Black pilots which came to be known as the Tuskegee Airmen

Promoted to lieutenant colonel, Davis led the 99th Fighter Squadron, the first all-Black unit in the Army Air Forces. The 99th deployed to North Africa in March 1943 to fight Axis troops in the region. In October of that year, he returned to the U.S. and took command of the 332d Fighter Group. They joined the 99th in Italy in December. While overseas, discrimination and racism still played a significant role in daily life. White officers questioned their combat performance so much so that Davis returned to the U.S. to defend their record. He faced several days of questioning from Congress, but never backed down from his stance that his airmen provided valuable and courageous service in battle.

In the two years Davis Jr. commanded the Tuskegee Airmen, they amassed an impressive record. While in Europe, the Tuskegee Airmen downed more than twice the number of aircraft they lost, destroyed miles of rail lines, sunk more than 40 ships including an enemy destroyer, and never lost a bomber on an escort mission. He received a Silver Star and the Distinguished Flying Cross for his service during World War II. Davis and the Tuskegee Airmen played a vital role in integrating the military. With their outstanding service record, the military could no longer use the excuse that Black Soldiers were inferior in battle or were unfit to lead.

Davis joined the Air Force in September 1947 when it split from the Army. Davis used his experience with the Tuskegee Airmen to push for integration of the Air Force as soon as possible. When the Air Force split, Black Soldiers made up over 20% of the founding Airmen, more than double the 10% quota used by the Army and Navy. This making segregation of Airmen both illogical and impractical to senior staff in the Air Force and Pentagon. President Truman officially integrated the military by Executive Order in 1948. The following year the Air Force became the first branch of the military to integrate.

Davis continued to break barriers after integration. He was the first Black military officer to attend any War College, graduating from the Air War College in 1950. After serving at the Pentagon for two years, the Air Force placed Davis in charge of a fighter wing stationed in South Korea. He was the first Black commander of an integrated fighter wing and proved that white pilots and officers could respect and take orders from a Black officer. After his success in Korea, Davis was promoted to brigadier general, making him the first Black general in the Air Force. For the next several years, Davis moved around Europe and Asia, training pilots and setting up defenses against enemy threats. He retired after serving as deputy commander in chief of U.S. Strike Command in 1970 (now U.S. Special Operations Command).

Davis served nearly 40 years in the military, and he continued to serve his community in retirement. He became director of public safety in Cleveland, Ohio, director for Civil Aviation Security, and even served as an assistant secretary in the U.S. Department of Transportation under President Ronald Reagan. Though Davis Jr. retired as a lieutenant general, President Bill Clinton promoted him to a four-star general in 1998. On July 4, 2002, he died at 89 years old and is buried in Arlington National Cemetery next to his wife Agatha, just a few yards from where his mother and father are buried. Throughout his military career, Davis fought for the rights of Black Soldiers. His achievements stand as a shining example of what Black Soldiers were capable of, permanently changing the nature of the military forever.