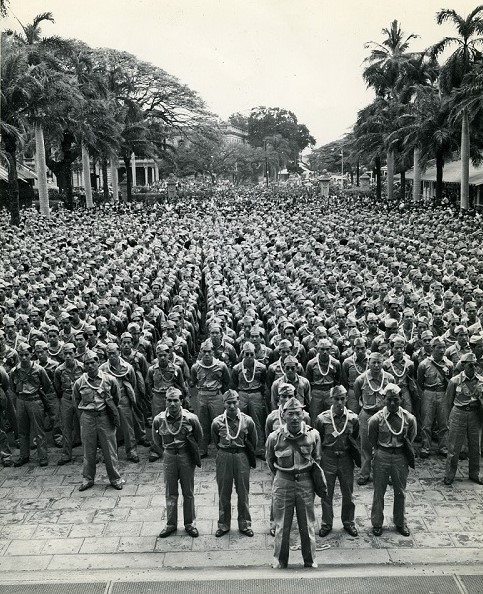 Goal: Recognize the commitment, challenges, and sacrifices of Nisei Soldiers.

Program Description:
Learn about the courageous men and women of Japanese ancestry from Hawaii and the mainland United States who served in the U.S. Army during World War II, while some of their families were placed in War Relocation Authority Confinement Sites.

Second generation Japanese Americans, known as Nisei, demanded the right to join the armed forces during World War II. On February 9, 1942, President Franklin Roosevelt ordered the relocation of Japanese Americans living on the west coast. 122,000 men, women, and children were sent to incarceration camps throughout the United States. Further, the government classified males of Japanese ancestry as enemy aliens. This classification disqualified them from military service. The Army later loosened this restriction in June 1942. Despite the odds, thousands of Nisei Soldiers bravely served in World War II.

During this Virtual Field Trip, explore the commitment, challenges, and sacrifices of the Nisei Soldiers. Participant will also examine Executive Order 9906, its impact on Japanese Americans living on the west coast and how military service was used as a strategy to advance civil rights.

Guiding Questions:
What can the experiences of Nisei Soldiers during World War II tell us about freedom and democracy?