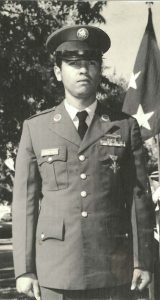 After growing up in poverty, Santiago Erevia joined the Army for a fresh start. Less than a year later, he exhibited tremendous bravery and single-handedly destroyed four North Vietnamese combat bunkers. Yet, he did not receive the Medal of Honor until four decades later due to ethnic discrimination. Remembered as a “silent hero” by his friends and family, Sgt. Erevia showed bravery, modesty, and the importance of recognizing all who served.

Santiago Jesus Erevia was born in Corpus Christi, Texas on December 15, 1945. The family struggled financially, and young Erevia worked at a nearby cotton farm to help support his family. Erevia left school as a sophomore to dedicate more time to work. In 1968, at the age of 22, he was working as a restaurant cook and recovering from a divorce.

1968 was the height of the Vietnam War, both in combat and casualties. Despite this, Erevia considered joining the Army, seeing an opportunity to continue his education and start a new chapter in his life. After one of his friends returned from service severely wounded, Erevia decided to enlist. The Army assigned him to the 101st Airborne Division in Vietnam as a radio-telephone operator. Remembered as quiet and reserved by his comrades, he earned the nickname “Mr. Lucky” for narrowly avoiding injury many times.

On May 21, 1969, Erevia’s unit moved to the city of Tam Kỳ, tasked with locating North Vietnamese soldiers in bunkers. As they began their advance across an open field, the unit came under attack by the North Vietnamese soldiers. With many members of his company injured, Erevia was tasked to give first aid to injured Soldiers, but faced intense fire from the North Vietnamese bunkers. Rather than taking cover, he remained fully exposed to enemy fire and began to crawl between the injured Soldiers to gather their ammunition. Armed with two M-16 guns and hand grenades, Erevia charged a bunker firing upon the unit, dropped a grenade, and destroyed it. He charged and destroyed two more bunkers. He then charged the fourth bunker, utilizing the M-16 guns to fire upon the attackers. When the battle ceased, Erevia assisted in evacuating those injured and killed. At the risk of his own life, Erevia single-handedly saved the injured Soldiers in his company.

Erevia spent the rest of his year-long deployment at Landing Zone Sally. In an administrative role, he helped deliver meals to Soldiers and replace uniforms. He completed his active duty commitment with the Army at Fort Riley, Kansas. Erevia then moved home to San Antonio, Texas, where he married Leticia Lopez and had four children. He worked as a postal carrier for the United States Postal Service until 2002. Erevia simultaneously served with the Texas National Guard from 1972 until 1989, retiring with the rank of sergeant.

Sgt. Erevia was awarded the Distinguished Service Cross in 1970. He received many other awards, including the Bronze Star, Purple Heart, Air Medal, National Defense Service Medal, and the Vietnam Service Medal.

Erevia joined the Army to change the course of his life. Within a year, he performed exceptional acts of bravery, saving his company from a devastating defeat. Yet, Erevia and his family never understood why he did not receive the Medal of Honor. Erevia himself thought it was because he had not been injured or killed in the conflict. This remained the case until the 2002 National Defense Authorization Act (NDAA). The NDAA ordered a review of service records of Hispanic American and Jewish American Soldiers who received the Distinguished Service Cross from World War II, the Korean War, and the Vietnam War for possible racial, ethnic, and/or religious discrimination from the Medal of Honor.

Erevia was one of 24 veterans (known as the Valor 24) found to have performed actions in combat worthy of the Medal of Honor. On March 18, 2014, President Barack Obama awarded Sgt. Erevia the Medal of Honor. After 45 years, Erevia was finally honored for his courageous actions and service to the nation. 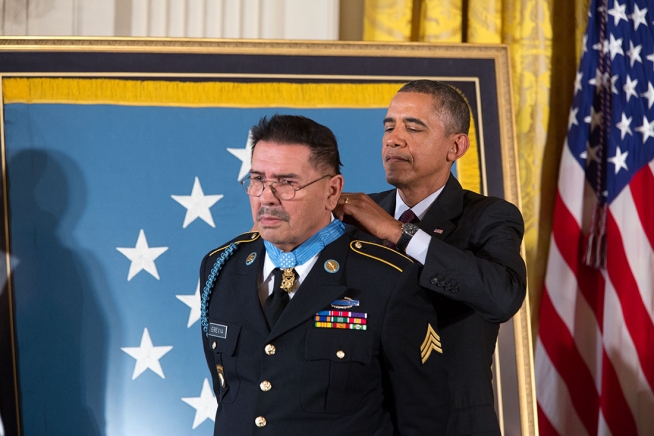 Erevia died of a heart attack on March 22, 2016. He is remembered by his wife, sister, four children, and grandchildren. One of his sons, Spc. Roland Erevia, followed in his father’s footsteps, serving in the Army and the Texas National Guard. His father shared this modest advice to his son upon his service during the Iraq War: “Just duck and hit the ground and raise your rifle and shoot toward the enemy,” and don’t “try to be a hero.”

As part of a major housing renovation at Fort Campbell, Kentucky, a park is being constructed and named for Sgt. Erevia. Erevia Park is scheduled for completion in 2023.