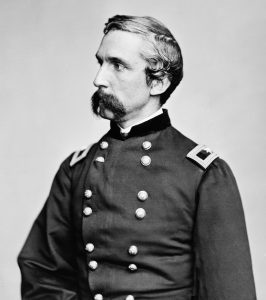 Maj. Gen. Joshua L. Chamberlain fought for the Union Army during the Civil War. As the commanding officer of the 20th Regiment Maine Volunteer Infantry, he led his troops at the Battle of Gettysburg. Tasked with securing the left flank at Little Round Top, his men fought bravely to ensure a Union victory. When they ran out of ammunition, Chamberlain ordered his Soldiers to attack the Confederate army with a bayonet charge. This helped secure Gen. Meade’s left side. Chamberlain served till the end of the war when he accepted the ceremonial surrender of the Confederate Army of Northern Virginia at Appomattox Court House, Virginia. For his service during the war, Chamberlain earned the Medal of Honor. His legacy as a leader in the U.S. Army continues with depictions of him in film, television, and books about the Civil War.

Joshua Lawrence Chamberlain was born in Brewer, Maine in 1828 as one of five children. His grandfather served as a colonel in the U.S. Army during the War of 1812. Chamberlain himself became an academic. He attended Bowdoin College in Brunswick, Maine and studied under Calvin Stowe, husband of Harriet Beecher Stowe, author of “Uncle Tom’s Cabin.” After graduating in 1852, he attended Bangor Theological Seminary. Upon completing three more years of study, he returned to Bowdoin College where he taught as a professor of languages and rhetoric. Chamberlain settled in Brunswick, Maine where he married and had five children.

At the start of the Civil War, Chamberlain volunteered to serve in the U.S. Army. The Governor of Maine appointed Chamberlain as the lieutenant colonel of the 20th Regiment Maine Volunteer Infantry. Despite a lack of military experience, his academic background helped him prepare for war, having read and studied military writings in preparation for the conflict.

The 20th Maine became part of the Army of the Potomac. Its men saw their first action during the Maryland Campaign in the fall of 1862. They went on to fight at the Battle of Antietam and the assault of Marye’s Heights in Fredericksburg, Virginia. Chamberlain and his men are most well-known for their fighting at the Battle of Gettysburg, where they occupied a strong position at Little Round Top on the extreme left of the Union line on July 2, 1863. After repeated assaults on their line, the regiment ran out of ammunition. Consequently, Chamberlain ordered a bayonet charge on the advancing rebels. The Maine troops’ sudden attack surprised and disorganized the Confederates, and forced them to retreat. The Union left had held. For his efforts at the battle, Chamberlain received the Medal of Honor in 1893.

After the battle, he took command of 1st Brigade, 1st Division of the V Corps, which he led until the end of the war, despite suffering six battle wounds. In June 1864, during the Siege of Petersburg, he received a near fatal groin injury. Believing his death was imminent, Chamberlain received a promotion to brigadier general to honor his service. However, Chamberlain survived his injury and returned to his command with the V Corps.

Once the Civil War ended, Chamberlain returned to his home state of Maine. He served four terms as governor where he focused on public service reform. When his time as governor ended, Chamberlain returned to Bowdoin College to serve as its president. As a public figure, Chamberlain gave lectures, served as major general of the Maine State Militia, and traveled abroad as a member of the Paris Exposition Commission in 1878. Chamberlain spoke and wrote extensively during his life, leaving behind a narrative of his time in the U.S. Army. His memoir, “The Passing of the Armies,” was posthumously published in 1915. Chamberlain passed away in 1914 due to complications from the injuries he received during the war at the Siege of Petersburg.

Chamberlain’s experiences during the Civil War continues to be retold today. One popular depiction of Chamberlain includes the 1974 book “The Killer Angels” by Michael Shaara. This book was reimagined in 1993 as the film “Gettysburg” and actor Jeff Daniels portrayed Chamberlain. He was also one of the main subjects of Ken Burn’s 1990 documentary series “The Civil War.”

Chamberlain, Joshua Lawrence. The Passing of The Armies: An Account of the Final Campaign of the Army of the Potomac, Based upon Personal Reminiscences of the Fifth Army Corps. New York: The Knickerbocker Press, 1915.